Monday I traveled back to Redding, California to spend one more night there before heading back out to the coast. At 648pm local time I walked out of the townhouse where my Airbnb is located to get something to eat and saw this:

You can see the smoke billowing up from the other side of the mountain, above the right-most car below and to the right of the center of the photo. This has now been named the Carr Fire (not Car), because of it’s location near Carr Powerhouse Road at the western end of the Whiskeytown Lake, about 20 miles west of Redding.

The official CalFire website says it was reported at 116pm local time today, and as of the 659pm local time update is listed at 1,500 acres.

Shortly (literally 5 seconds) after I took that photo Tanker 40, a jet which drops fire retardant, flew overhead where I was standing, presumably to go reload:

And since then I have seen at least 4 different Forest Service aircraft.

Part of Highway 299 near Whiskeytown Lake, about 20 miles west of here, is closed. I was planning to take that road out to the coast tomorrow but have already found another route.

At 820pm local time, as I post this, I see less smoke rising although the sun is about to set and it is too dark to have aircraft dropping water (by helicopter) or retardant (by airplane). I can look right at it from my bedroom window.

I will update this post with additional CalFire information as it becomes available. Evidently there are other fires burning over that way as well, although they hadn’t made the website I have been checking as of this morning before I left Klamath Falls.

UPDATE (well, sort of) – The CalFire site’s latest update was at 905pm Monday local time and still had the fire listed at 1,500 acres. Local TV news reports as of 1030pm, however, say the fire had grown to 2,500 acres and was only 5% contained. I don’t know where they got that information unless it was from a reporter on the scene for the 11 o’clock news. I hit “refresh” on the CalFire website but am not seeing any news later than 905pm. At 148am local time Tuesday at least I don’t see a red “glow” coming from the direction of the fire as I look out my window!

UPDATE #2 – 523am local time. No more information about the Carr Fire, but it is just starting to get light out. CalTrans is not offering detour information but is simply telling motorists to “find an alternate route”.  Thanks, CalTrans!  Just north of the Carr Fire is the Highland Fire, which has been burning since Friday afternoon at 126pm. It is in the “French Gulch” area, further away from Hwy 299.  As of 625pm last night it is listed at 63 acres and 85% contained.  It is being blamed on a campfire at an illegal marijuana growing site in the mountains!  I’m surprised they didn’t call it the “Maryjane Fire” (or perhaps that name was already taken).

I think I’m going to stick to my southern alternate route idea, which runs roughly parallel to Hwy 299 but is a smaller road and will be slower. Another option is going way north into Oregon, since Crescent City is my ultimate destination, but it would take me right past the Garner Complex, a group of smaller wildfires which now totals 11,564 acres and are only 14% contained. They were talking about that group of fires on the radio yesterday morning. They have been burning since July 15 and were started by lightning.

This is a “screengrab” of FlightTracker, showing recent activity for the Forest Service aircraft with the designation N421DF. It shows the plane taking off from the Redding Municipal Airport and flying circles around the area of the fire. My guess is this might have been the “air traffic control” plane which coordinated the flight paths of other, bigger planes and helicopters. I got the idea of checking this from a Tweet that someone posted last night regarding the fire. I don’t use Twitter but could see other posts in my Google search for information on the Carr Fire.

It is now 604am local time. I can see the mountains where the smoke was coming from last night but it is so smokey that I can’t see much else. It appears that the smoke has settled near the ground overnight (or it could be fog from groundwater sources over in that direction). I do see blue sky overhead.

Now 625am. There is enough light and blue sky overhead to see that there is no smoke billowing high up in the air as it was last night, though smoke and low clouds are spread south of the problem area down close to the ground. Still no official updates online and apparently local news is just rehashing the information from last night. I’m going to take a shower and hit the road!

At 648am local time here is what I saw from the bedroom window.  The area of the fire is just on the other side of  the mountain range (and streetlight and red truck) on the right side of the photograph.  The smoke appears to have settled near the ground, drifting south (which is left from this vantage point).  The second photograph is looking further left and you basically can’t see anything off in the distance. 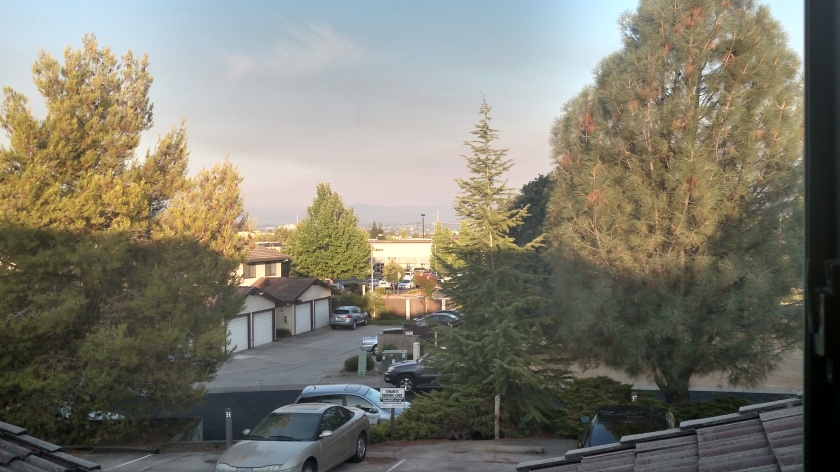 As of 1125am local time Tuesday the fire has affected 3,126 acres and is 15% contained. Officials now think it was started by a travel trailer which had a flat tire and the metal rim created sparks when it pulled off the road, igniting nearby vegetation..

Wednesday night CalFire has the fire shown at almost 7,000 acres and Thursday morning it has almost tripled in size to 20,000 acres.  Many more mandatory evacuations of campgrounds and small, mountain towns have been ordered.

Thursday night into Friday the fire more than doubled in size again and as of the 845pm Friday CalFire update is listed at 48,312 acres and reduced to only 5% contained.  Two firefighters have lost their lives and numerous homes and boats have been destroyed  (500 structures destroyed and almost 5,000 threatened).  Most radio stations in Redding have been knocked off the air as their transmitters were damaged or destroyed and KRCR, the ABC-TV affiliate in Redding, literally abandoned their studio while doing the evening newscast as staying there was too dangerous.  They are now streaming news to the local residents online.  I saw where their studio was when I was in Redding and the nearby Turtle Bay Exploration Park (right next to the Sundial Bridge which I posted photos of) is closed to help keep roads clear and not endanger their staff members.  The fire is progressing towards Redding and almost 38,000 residents in the area have been ordered to evacuate.  Weather conditions in the area are NOT forecast to be favorable for containment.  The Shasta Dam Visitor Center (where I posted several photos from) and the town of Lake Shasta (where I had some awesome tacos) have been evacuated.

Friday night the fire swelled to 80,906 acres (805am Saturday CalFire update).  Firefighters are trying to keep it west of Interstate 5 but they say this fire is behaving very differently than fires before it and is extremely unpredictable.  TV news broadcasts are showing large neighborhoods of burned out homes.

One week (and a few hours) after the Carr Fire started, as of the July 30th 721pm CalFire update, the fire has damaged or destroyed 103,772 acres.  818 residences have been destroyed (plus businesses and other structures) and 167 homes have been damaged (plus other structures).  6 people have lost their lives and some are unaccounted for.  The fire is only 20% contained.