Upon entering the Monument from the north one of the first this I came to was the vast Devil’s Homestead Flow.  This is a large area of volcanic rock created in the same fashion as what has been happening in Hawaii the past three months or so – superheated liquid lava oozes out from a volcanic source, spreads over the land and quickly cools and hardens.

… and the lava field spreads far to the right as seen in these photos.

Next I caught sight of the Schonshin Butte, which reaches over 5,300 feet elevation and has a fire lookout tower sitting atop it.  If you look closely at both the northeast and south vantage point photos of the butte you can see the tower on top.  This is the south view and the tower is at the top, right.

From the northeast view it sits atop the highest point, on the left:

A sign indicated that on a clear day you can see 90 miles from the tower.  This morning, with the heavy wildfire smoke, I doubt of you could have seen 90 YARDS from up there…

Next I went to the Visitor Center (which is at approximately 4,800 feet elevation, as is much of the Monument).  Visitors who plan to enter any of the numerous caves on the property must register for a free permit and must follow “white-nose syndrome” (a disease lethal to bats) safety protocols if they have been in ANY caves previously and are potentially wearing any shoes or clothing items which were in those caves.  I have been in several caves the past 2 or 3 years but chose not to enter any of them here.  If you are interested in caves, however, this would probably be a great place to visit as they have a wide variety of various lengths and skill levels which are accessible year-round.  There are also several caves which have limited access, some restricted to winter-only, and must be ranger guided.

In the Visitor Center I saw this chunk of Obsidian (a dark, volcanic glass), this one having wavy gray areas in it.  This chunk is slightly larger than my fist: 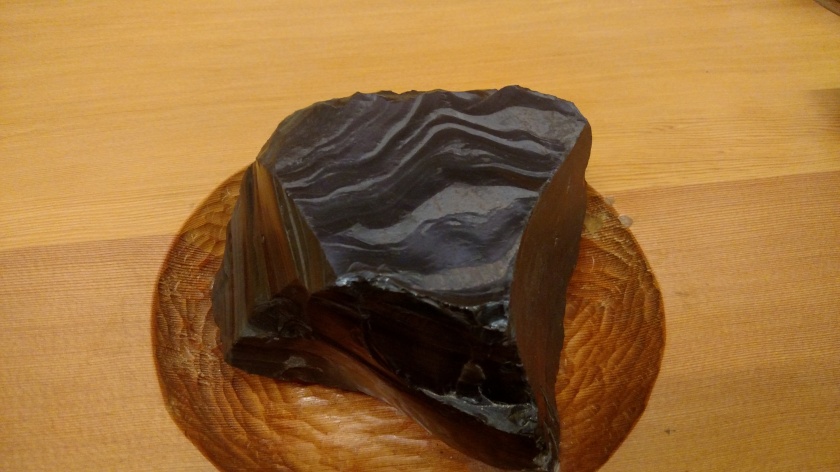 I saw a huge area of obsidian rocks last year when I visited Bend, Oregon (search for “Big Obsidian Flow” on the Home page or use the calendar there to look at posts from 8/1/17 and 8/5/17).

I also learned about Tule (pronounced TWO-lee).  I have been visiting a wildlife refuge called Tule Lake this past weekend, and have driven through the nearby town of Tulelake.  Tule is a reed-like plant, very similar in appearance to the heavier green reeds often seen in lakes and marshes with brown cat-tails.

Tule may be cut and tied together and are sturdy enough to build a small canoe, as demonstrated in this photo of a Modoc Indian (a local tribe) paddling a canoe made from tule. 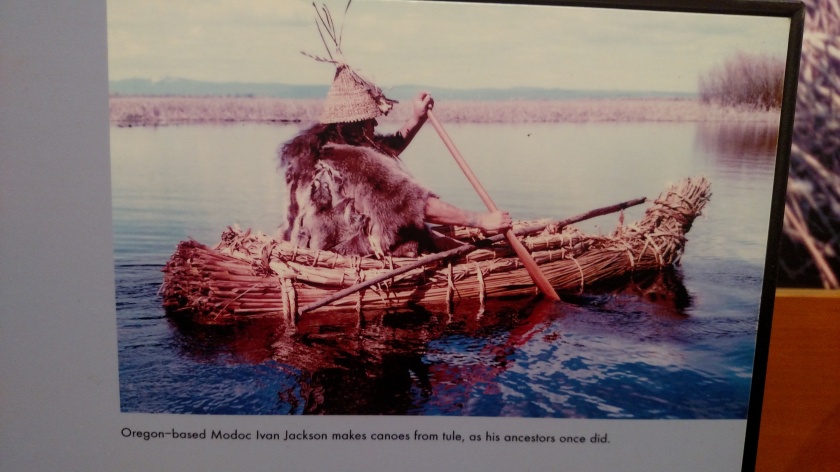 Also in the Visitor Center was a display of various forms of rock created by the hardening of lava.  These included pumice (remember “Lava” soap?). 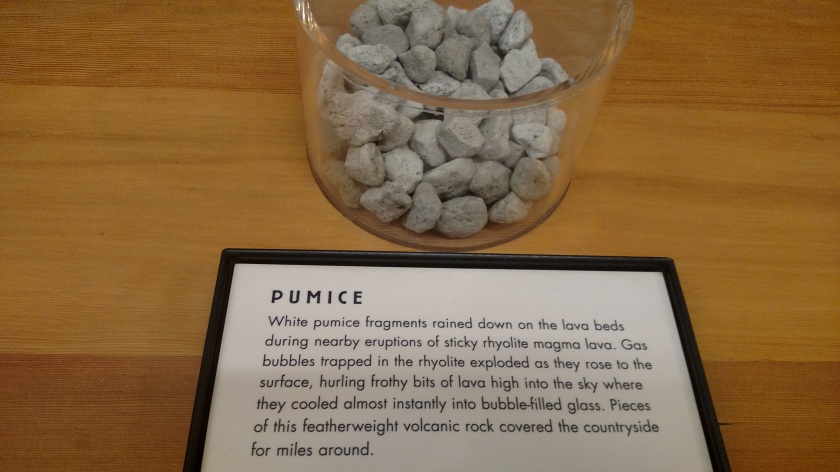 I then went out and drove through various areas of the Monument which are accessible by car.  This entrance to a cave indicated it was temporarily closed for a reason other then “white-nose syndrome”: 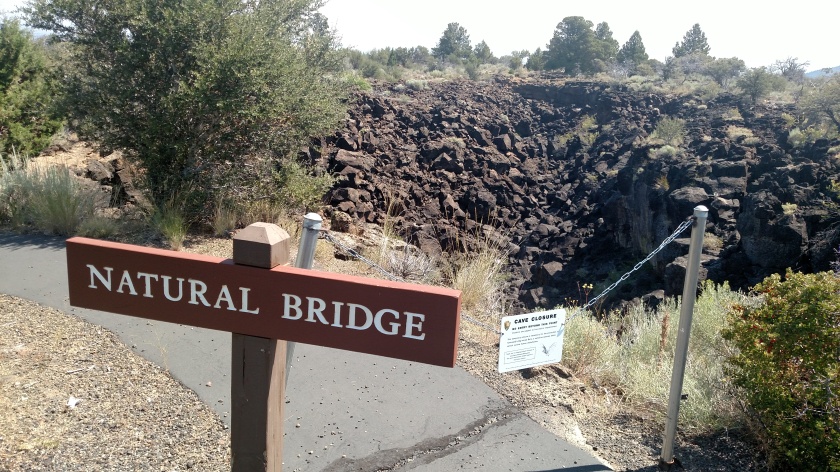 This is an above-ground formation called “Fleener Chimney”: 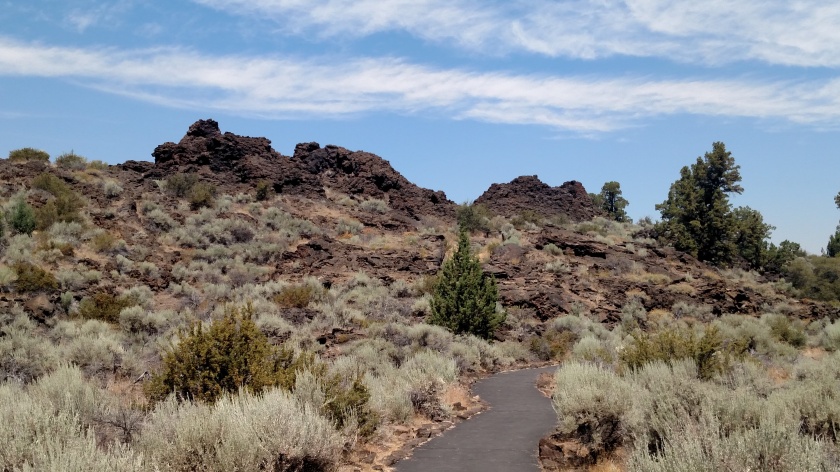 And as I was taking the access road back out to the main road I saw this interesting flower growing by the road.  It is called “Smoothstem Blazingstar” and the early afternoon sun was coaxing the blooms to open: 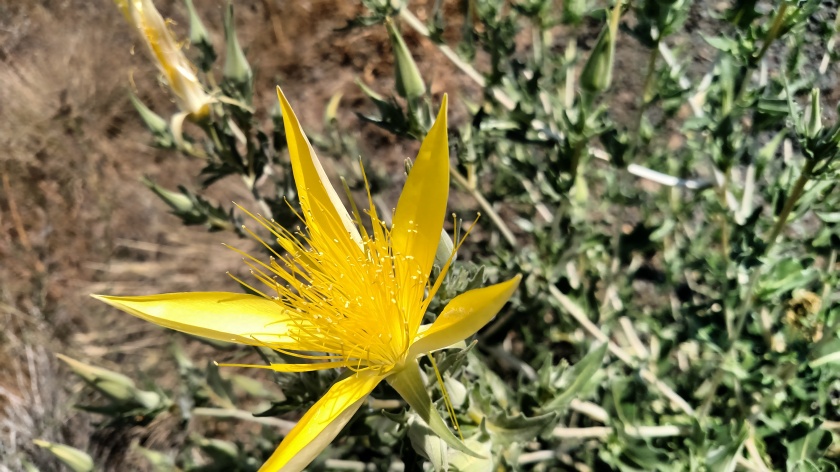 When I got to one overlook area I looked south and saw these various cinder cone formations scattered across the property:

And finally, I saw this diagram in the Visitor Center indicating that this entire Monument is only one small part of the much bigger “Medicine Lake Shield Volcano” (and you can also see Mount Shasta in the lower left corner of the diagram): 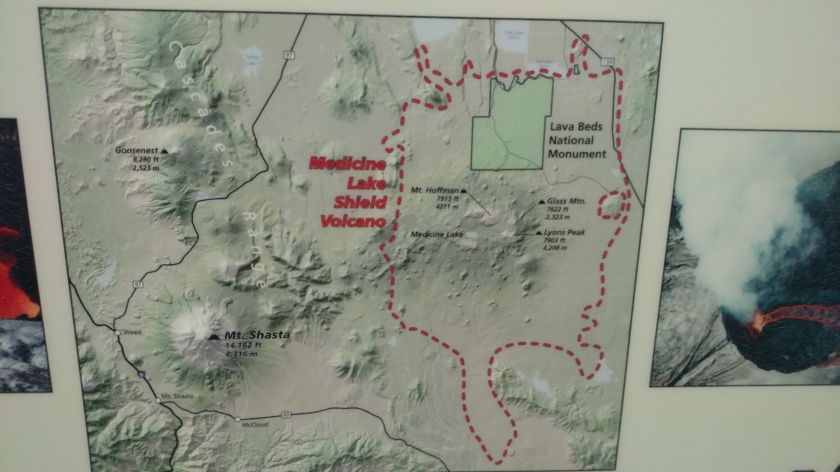