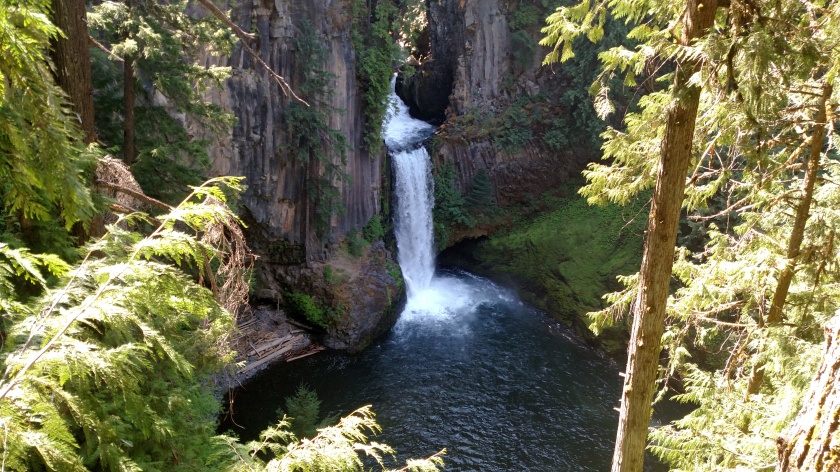 First let me say that starting with today’s posts I will reverse the order in which I post pictures.  I assume most people go through the blog from the top down.  The most recent posts are at the top and that is the way I had been posting pictures, with the last picture I took that day at the top.  Well, as I write the commentary that order sometimes makes it awkward when referring to other posts.  So I’ve decided to post pictures so that as you scroll down you are seeing things in the same order as I did that day.  Wish I would have thought of that sooner.

I also want to point out that as you look at the blog you can left-click on a photo to enlarge it to full screen (at least that is how my laptop responds) and then right-click if you’d like to save it to your computer for future enjoyment.

I left the house in Bend early this morning and headed about an hour and a half south on Route 97.  My first scenic road of the day, Route 230, then took me west, past the north entrance to Crater Lake, about 85 miles through Umpqua National Forest to the little town of Idlewyd, Oregon.  Along the way I stopped at several waterfalls and I liked this one the best.  It was a 3/4 mile hike up (and down) a VERY steep incline (twice, once in and once out) to reach the observation platform looking down on the Falls.  The Falls itself is at 2,329 feet elevation but the hike probably took me up to about 2,600 feet at the highest point on the path.  But it was SO worth it.  I’m a little bummed that the sunlight makes the trees in the foreground so bright.  It was an absolutely stunning view looking down at the falls.  It was a very small observation platform so there weren’t too many options for positioning myself for taking pictures once I got there.

After reaching Idlewyd I doubled back and took another series of scenic roads to reach the south entrance of Crater Lake National Park. 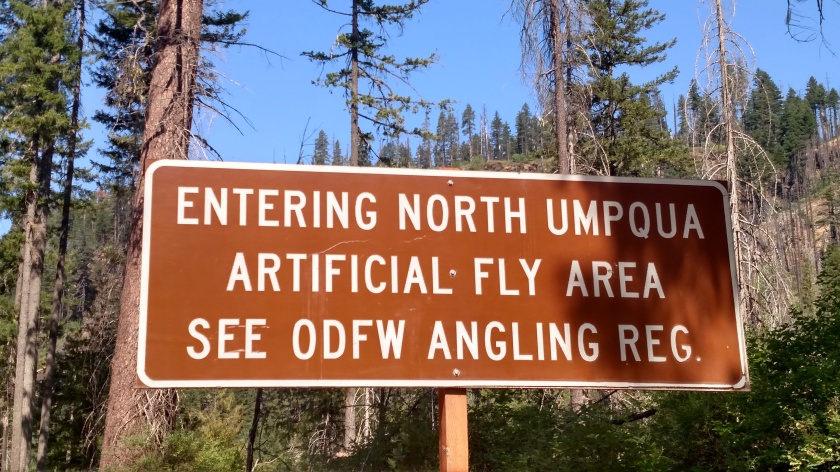 Can’t say as I’ve ever been in an Artificial Fly Area before. 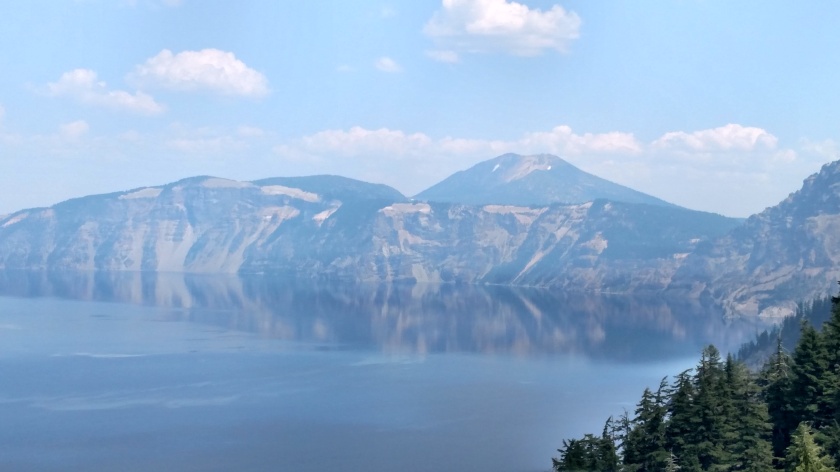 This was my first look at Crater Lake, and boy was I impressed.  The lake itself covers 20 square miles and has a surface elevation of 6,173 feet.  There is a 33 mile long road which encompasses the lake (Rim Drive, East and West depending on which side of the lake you’re on) affording the viewer numerous vantage points.  There are lots of pullout areas for parking and the overlooks provide some spectacular views.  It wasn’t too crowded today so I never felt like I was interfering with anyone’s shot while positioning myself for taking pictures.

I will refer to various landmarks by clockface positions.  I entered the Park via the south entrance but that actually put me at about 7 o’clock on the map.  I traveled Rim Drive in a clockwise direction.  I planned my arrival so that I would have the sun behind me as I was on the south and west sides of the lake.  Because of the haze looking across the lake I am planning to come back early in the morning on Thursday and revisit the north and east sides of the lake for better pictures of the opposite banks.  Because of the terrain there are not as many overlooks on the east side as there are on other parts of the lake.

As I stated, the lake has a surface elevation of 6,173 feet.  These two pictures were taken from approximately 7,200 feet, and the highest point I reached today (although I didn’t check it too often) was about 7,800 feet.

According to the official Crater Lake National Park map, this area receives an average of 533 inches of snow each year (that’s 44+ feet for those of you who aren’t beancounters)!  It is one of the snowiest inhabited places in North America. 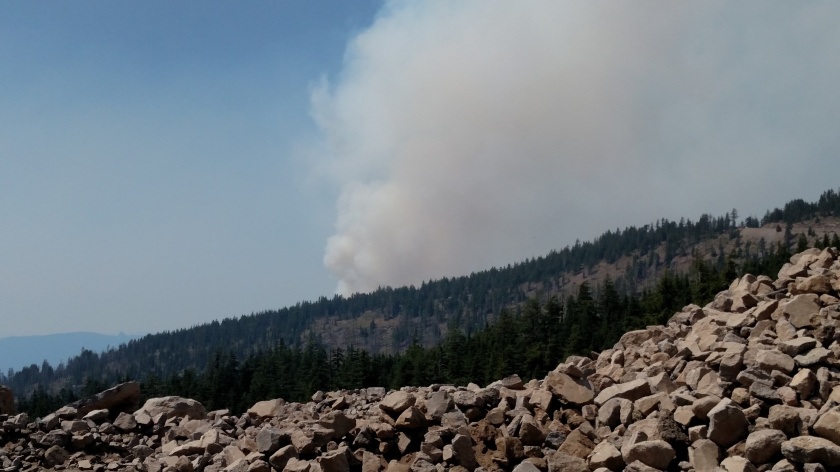 Shortly after entering the Park at the south entrance and beginning my clockwise drive around West and East Rim Drive I noticed the smoke from this wildfire off to the west.  It is located outside the Park itself but within Klamath County.  It just started 5 days ago, currently involves 130 acres and is only 5 percent contained.

I’ve been keeping tabs on wildfires using some online maps and, barring future development, should be in good shape for the foreseeable future given the route I’m taking.  I am starting to notice more haze on the horizon as the wind moves the smoke from all the fires throughout the Northwest in various directions. 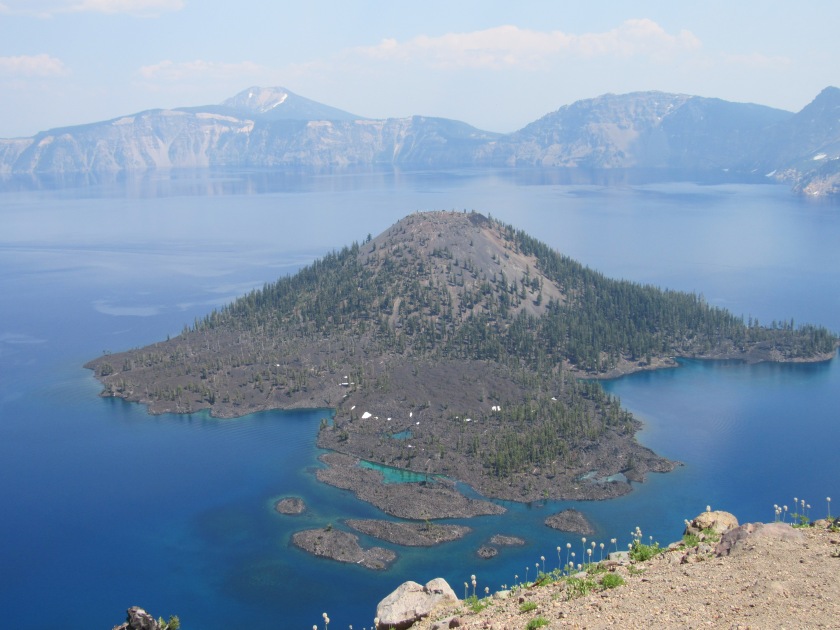 This is a closer look at Wizard Island looking due east from the Watchman Overlook (both are located at 9 o’clock on the map).  If you look closely at the bottom of the upper photo you will see some of the unusual white flowers I first saw at Glacier National Park.

I’ll just let these pictures speak for themselves. 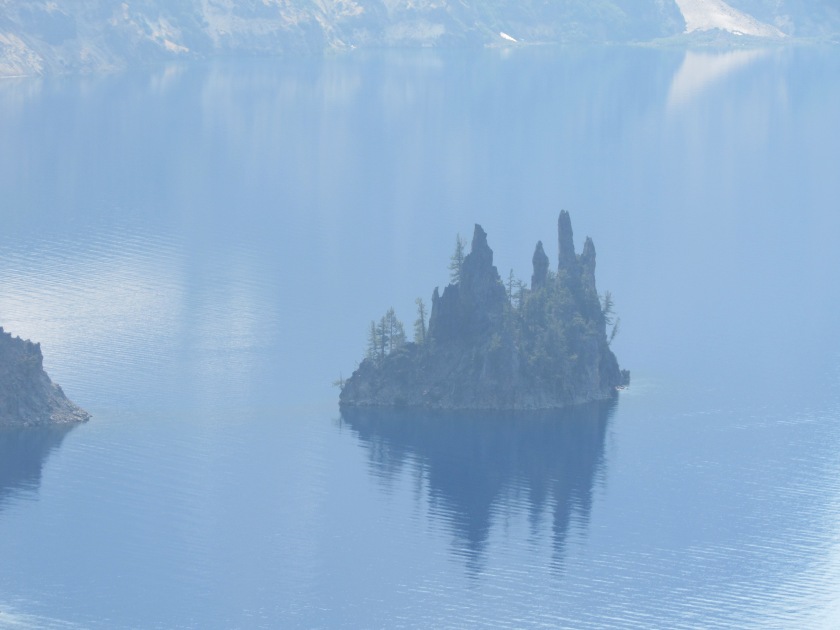 This curious formation is located at 5 o’clock on the map, although the overlook from which these were taken is further north than that.  I may replace these with newer pictures by this weekend if the sun placement when I return yields a better picture, although if I get down here too early in the morning the terrain may block the sun from this part of the lake until midday.  Check back on this post later just in case.

This is an area of the Park found at the end of Pinnacle Drive, which branches off East Rim Drive at about 430 o’clock on the map and extends 7 miles to the southeast.  The lowest picture was taken as Mr. I’m Afraid of Heights JohnBoy leaned precariously out over the vegetation to get the shot (hence, it’s a little crooked).  Oh, the risks I take for the blog….

BTW, I had never heard the term x30 o’clock until our minister in Evanston, Illinois (where I was born) used it in church while discussing upcoming church events. 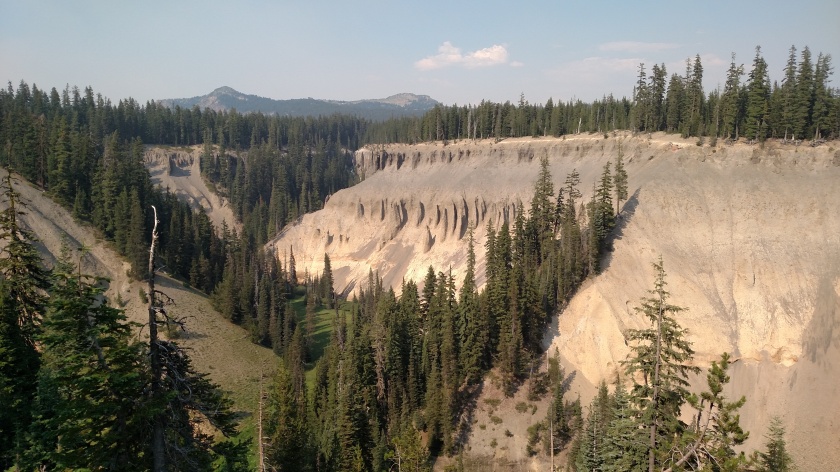 As I left Crater Lake National Park through the south entrance, I turned left and proceeded east towards Route 97 to get back to Bend.   I saw this scene to my left as I drove along Route 62.

Not long after leaving the Park I noticed that visibility in the distance was very poor, the worst it has been this entire trip to date.  I presume this is due to smoke from some big wildfires currently burning in northern California and drifting up this way.  There are also some fairly small fires burning in southern Oregon, so depending on the wind direction it could be from them as well.

I checked up on the wildfire I had seen over near Missoula, Montana (now called the Sunrise Fire).  It was actually a group of small fires when it started but has now grown to over 10,000 acres and is only 5 percent contained.  There are almost 500 firefighters working to control and extinguish it according to the ArcGis map I found online.

As of the end of the day Tuesday I have been on the road exactly 4 weeks and have logged 12,730 miles.  Oh, and as of last Sunday morning I have now spent at least one night is each of the 48 contiguous states.  Only Alaska and Hawaii to go.