I took these after driving through the little town of Dolores.  You’ll be seeing more from here tomorrow.

These folks were getting ready to have some fun on the Dolores River. 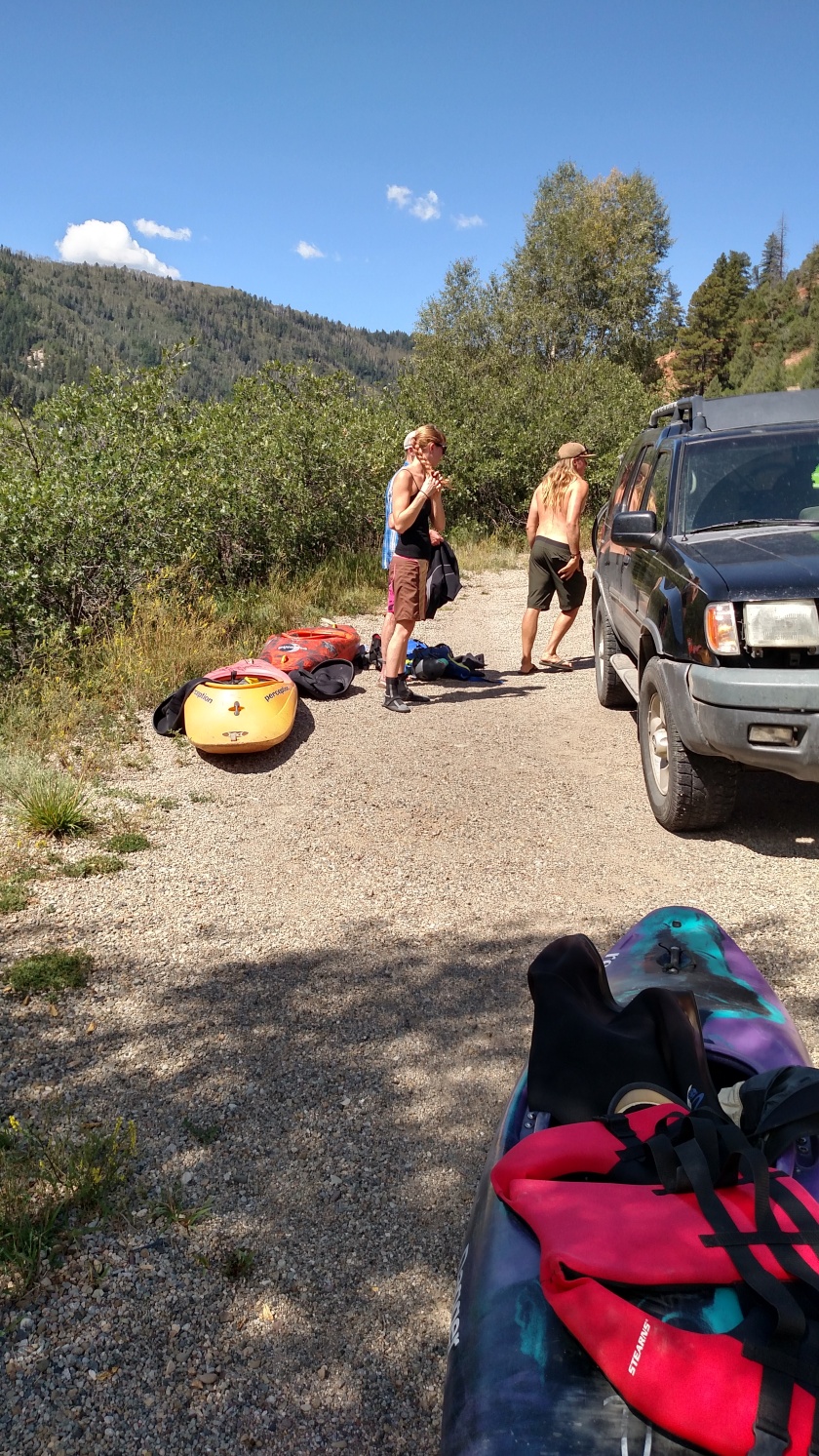 As I was further up the road taking pictures of rock formations (which you’ll see tomorrow) I was shocked to see two car transport trucks loaded with Teslas (VERY expensive electric cars) come whistling by. 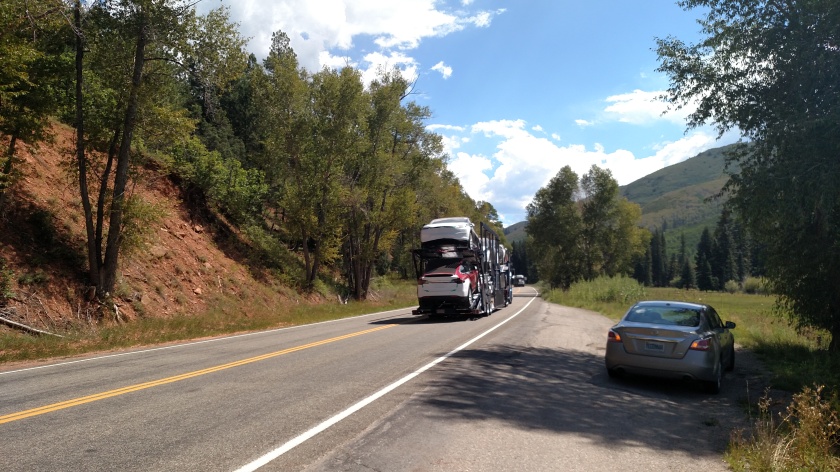 I imagine they were on their way up to Telluride, where every man, woman and child probably owns a Tesla by now.

Sorry, folks.  I started two other posts today but it is now 709am local time and I’ve got to get ready for my big day.  I’ll include them with my posts tomorrow. 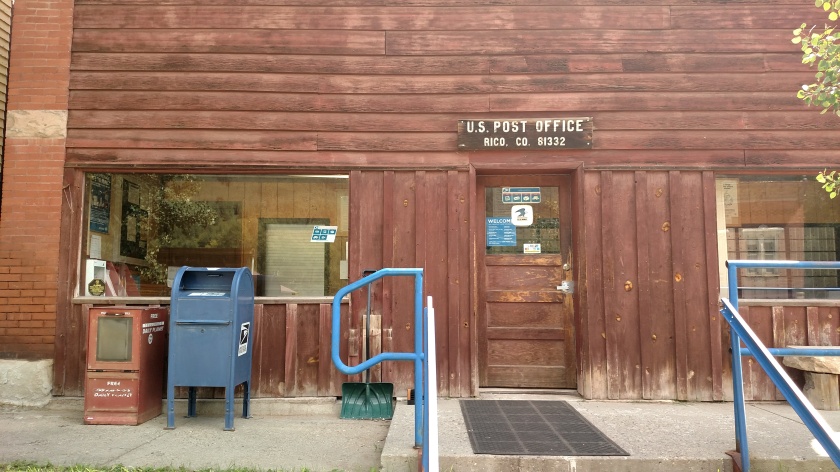 They even rent E-Bikes, the new craze in bicycles. 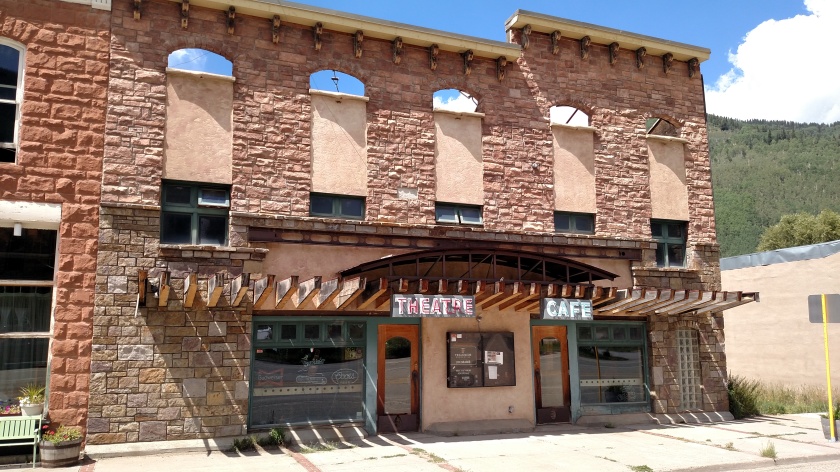 I enjoyed a very nice chat with the woman who was patiently waiting for visitors to come to the museum. 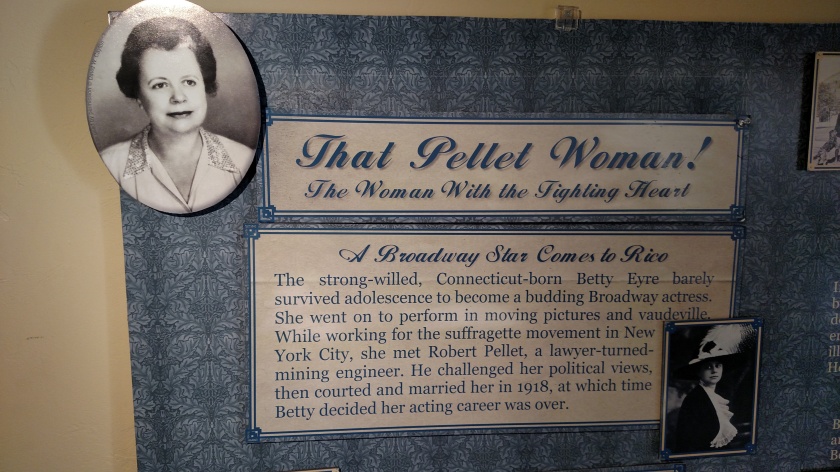 Rico even has it’s own telephone company! 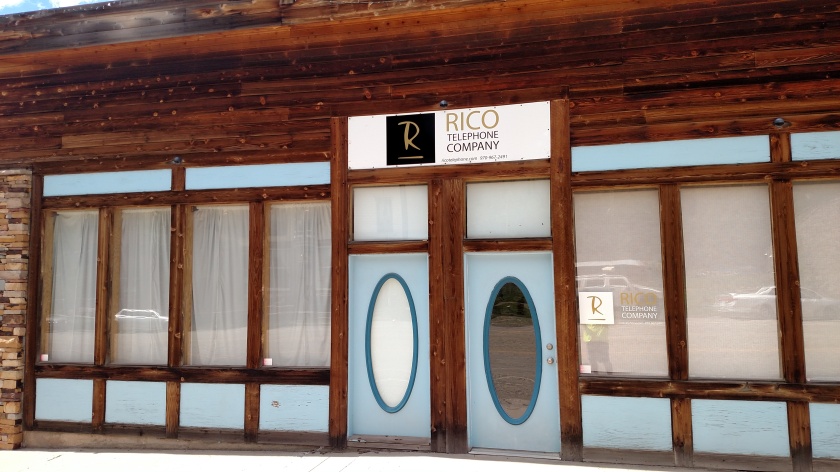 Sorry about the trash cans.  I wanted to get the sign on the side of the building.  Guess I need to learn how to use PhotoShop. 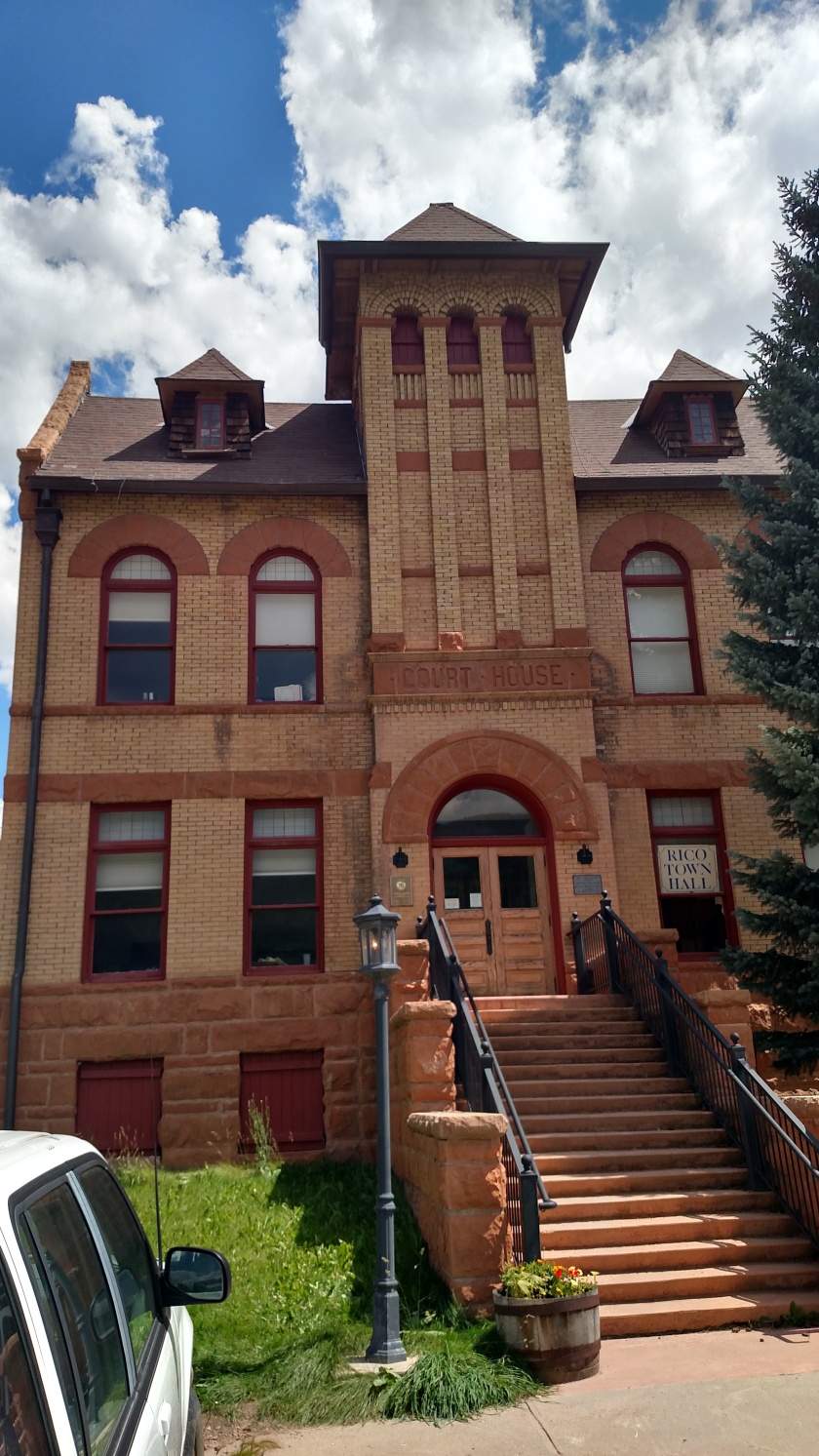 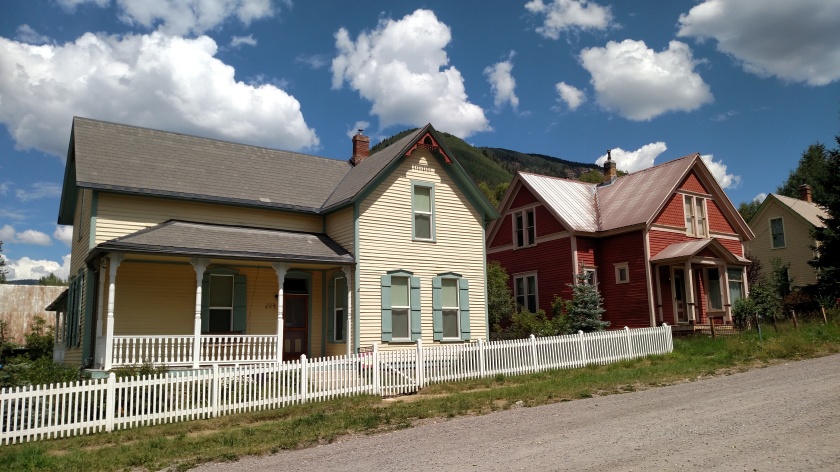 As I proceeded up the road past Rico I came across this woman painting near the Lizard Head Pass.  I have seen artists inspired by and recreating what they are seeing on canvas at various places during my trip.  This is Susan, who lives in nearby Dolores, Colorado. 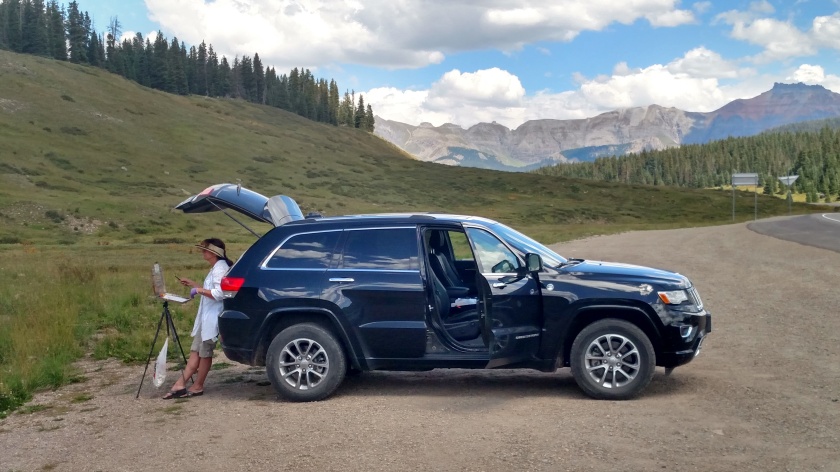 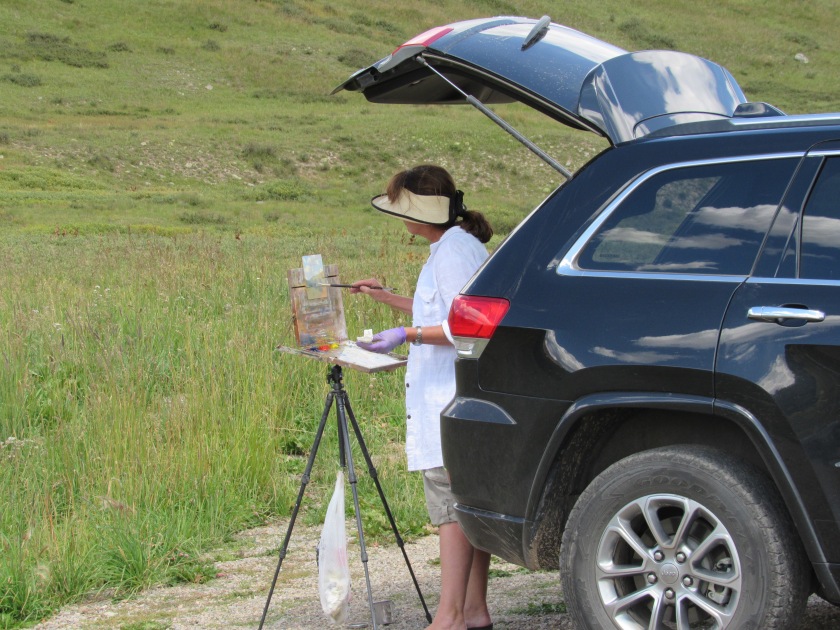 Susan took a break from her work and we had a very enjoyable conversation.  Here is what she was being inspired by. 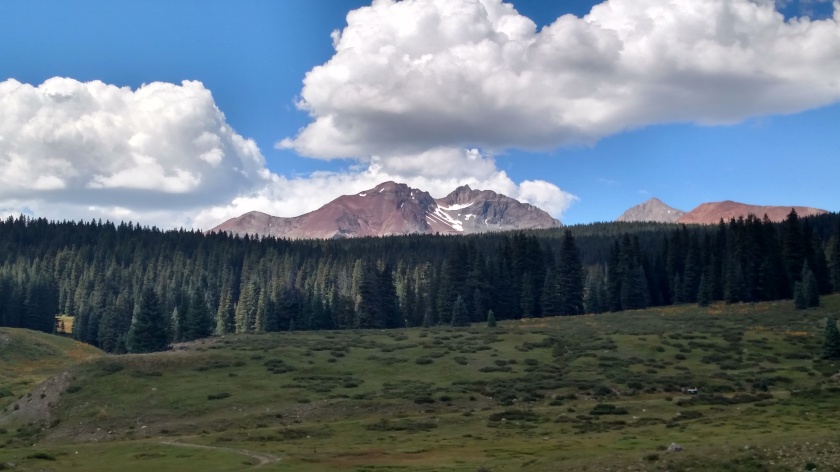 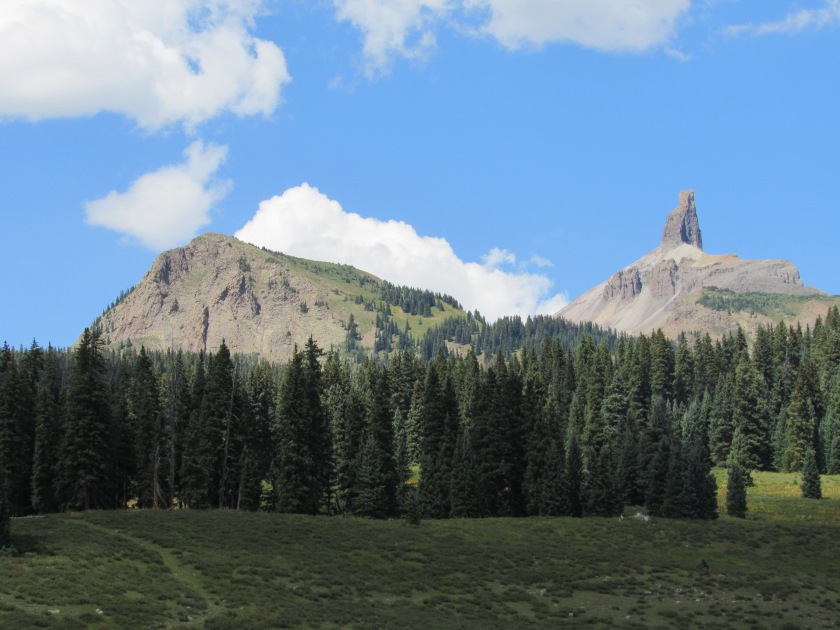 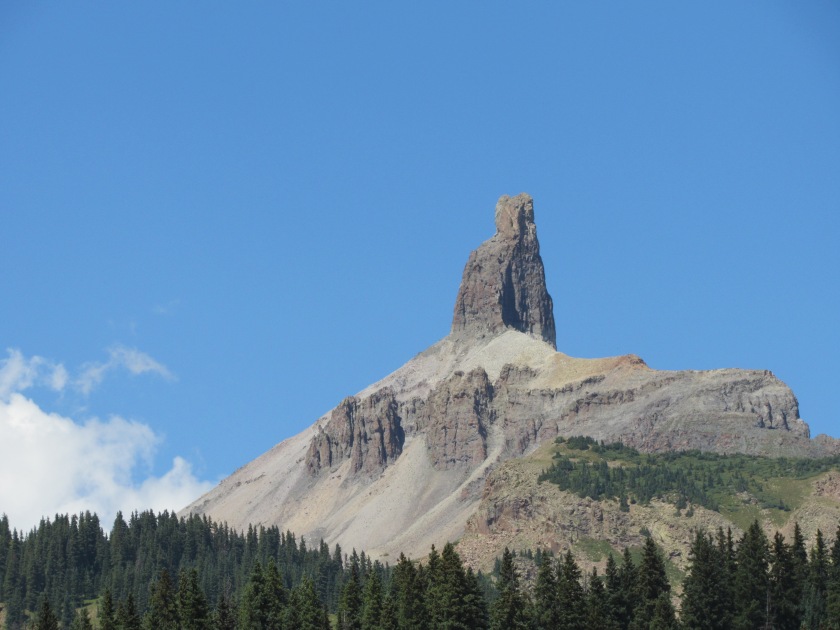 Now, take a moment to ponder what you have just seen and read but please stop thinking about Susan before reading this next section.

PLEASE SHOW ME YOUR BACKSIDE

This is perhaps the best example I have ever seen of not judging a book (or mountain) by it’s cover.

If I turned about 120 degrees to my right from where I had been talking with Susan I saw this mountain in the direction I was about to travel.

A nice looking mound of dirt and rock, right?  Well, as I continued on up the road the views of this mountain changed dramatically. 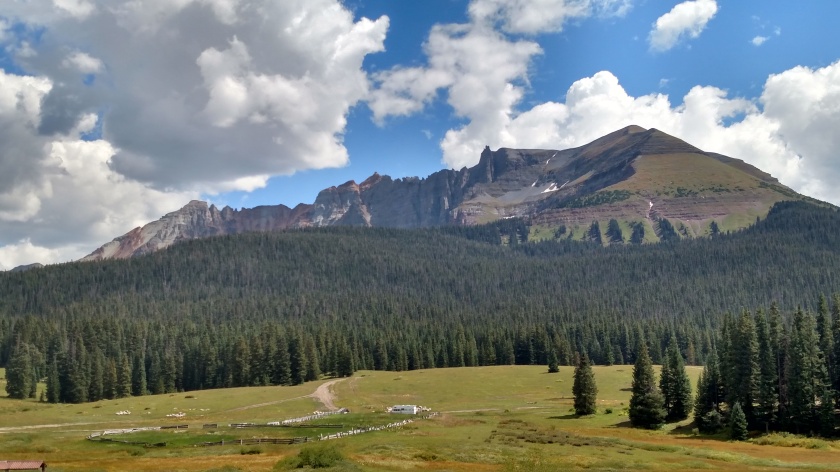 Pretty cool, huh?  I have lots more photos but I think this illustrates my point.

Further up the road I saw Priest Lake, with a pretty awesome background. 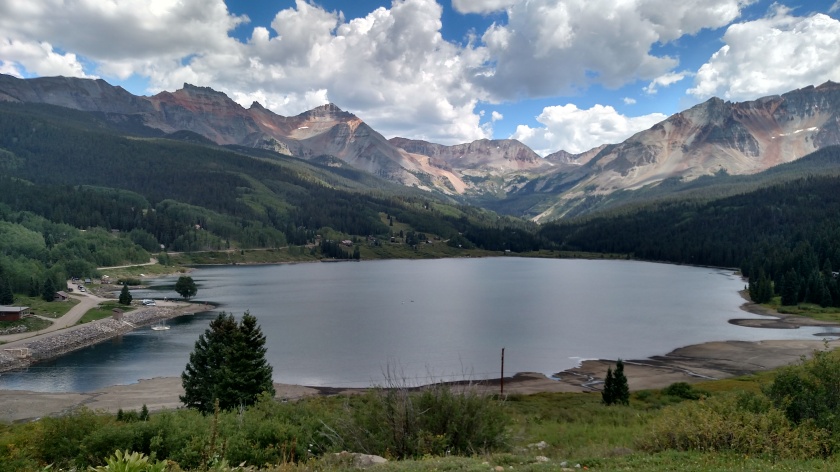 And further up the road, more mountain views. 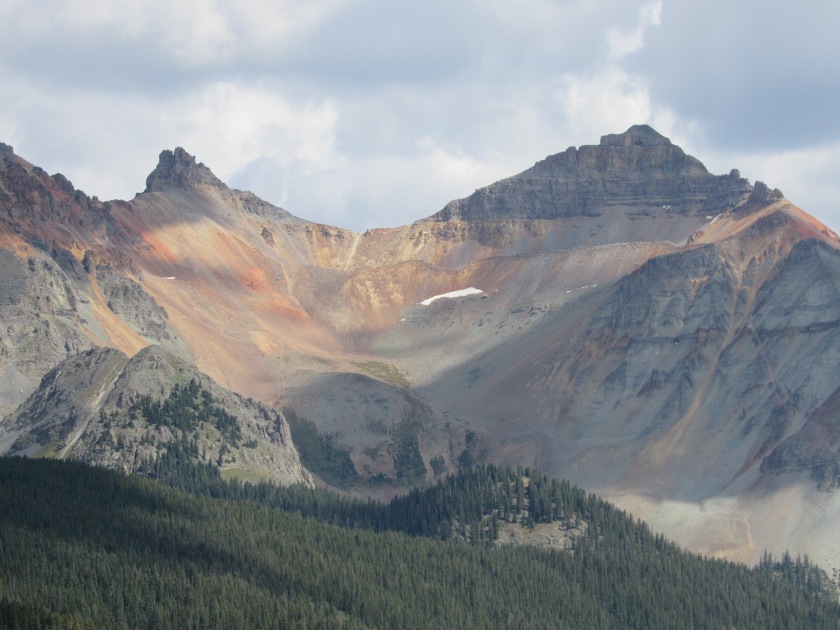 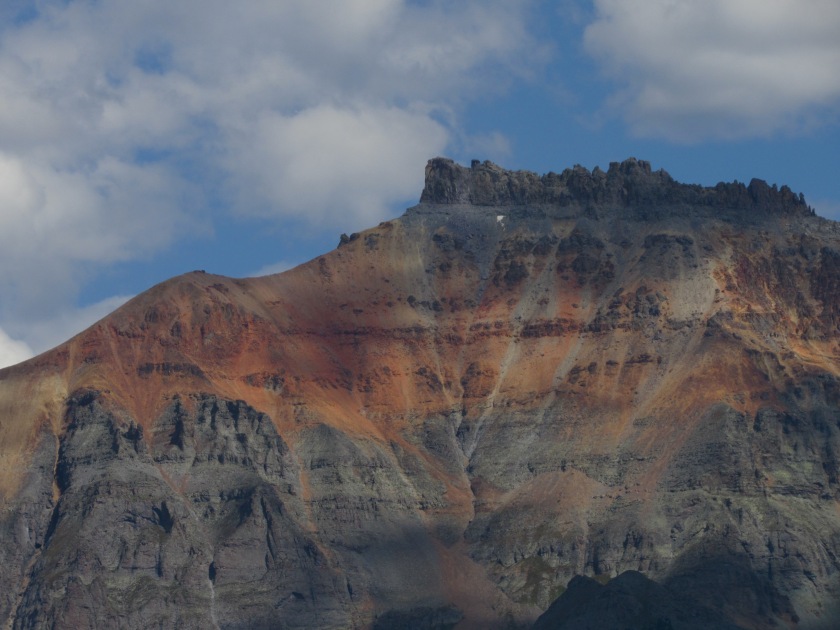 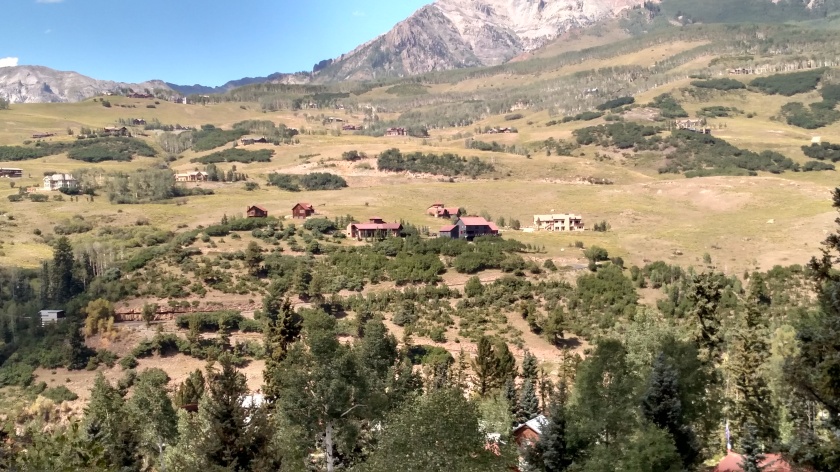 The young man I spoke with down at the Retro Inn in Cortez told me that when I got to Telluride I should drive all the way through town and continue on what would become a dirt road until I reached Colorado’s version of Bridal Veil Falls.  I did so (at the painfully slow 15 mph speed limit). 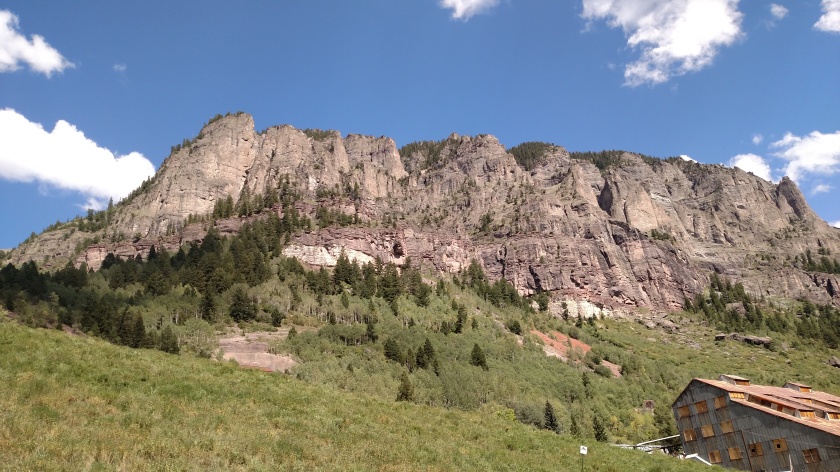 If you look straight up from the right taillight on the white truck you’ll see the upper portion of the falls.

And to the left of the falls is a white house!

I’d sure hate to plow their driveway…

After leaving Telluride I continued on my way, eager to start my southward turn back to Durango.  Here is a four-shot panorama from an overlook. 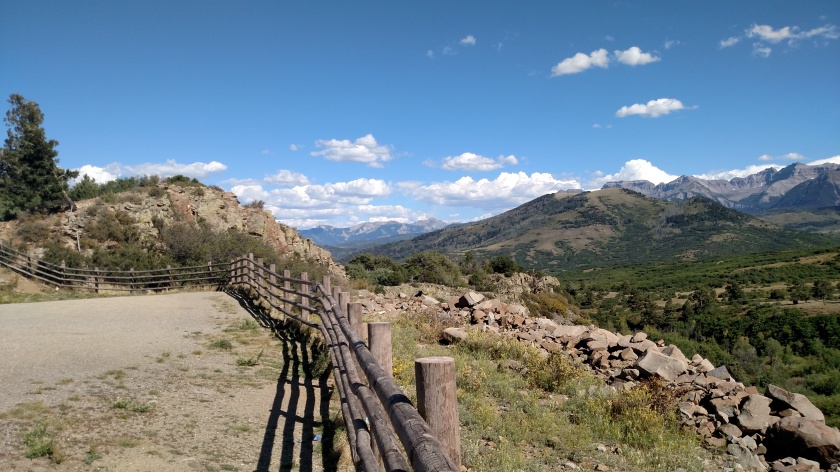 Not too shabby, eh?

Finally, a very tall mountain right next to the road before getting to Ouray.

These were all taken in or near the little town of Ouray (pronounced OOH-ray), Colorado.  This was a far north as I made it on Saturday while driving on the amazing Route 550, which my GPS informed me is also part of the “Million Dollar Highway” (and she’s never wrong….  You can’t see me rolling my eyes….).

Based on the photo I took overlooking the town which I posted yesterday, it is hard for me to believe that the population, according to the 2010 census, is only 1,000.

Two things I should have mentioned yesterday.  I’ve already raved about how incredible the drive was.  It occurred to me later that all those amazing sights (and more that I saw or took photos of but didn’t post) were all in only a 75-mile stretch of road!  Second, I’ve never seen so many Jeeps in one day in my life. 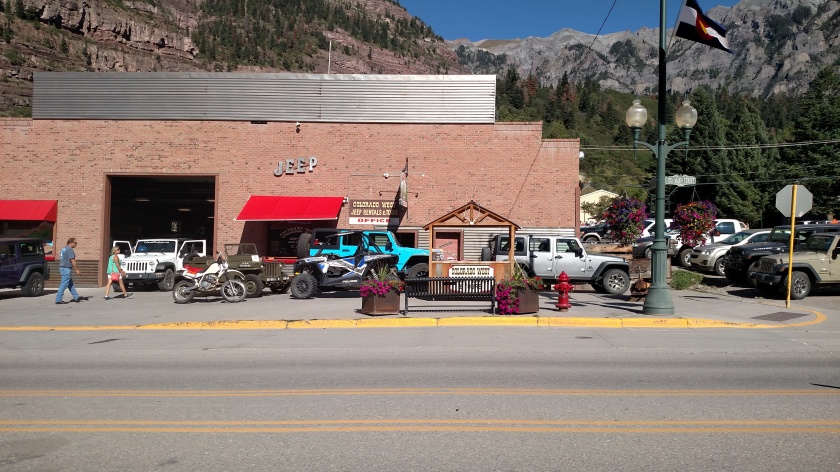 This establishment in Ouray serves all your Jeep purchase, rental and repair needs.  Jeeps (and Subaru station wagons) seem to be the vehicles of choice out here.  I’ve also seen lots and lots of BMW’s on the road in the area due to the BMW “Drive the 4 Corners” gathering being held at the Purgatory ski area, about halfway between Durango and Ouray. 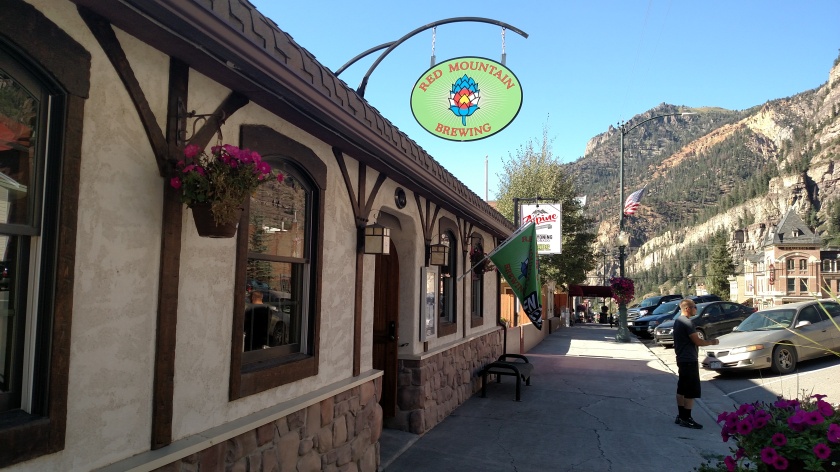 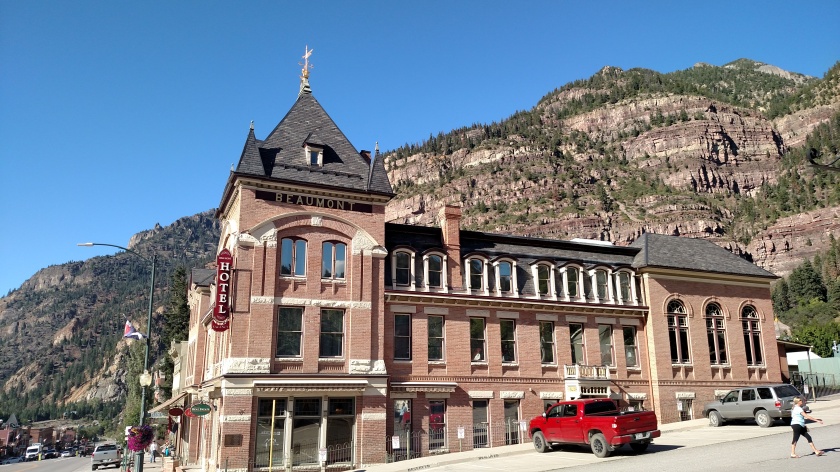 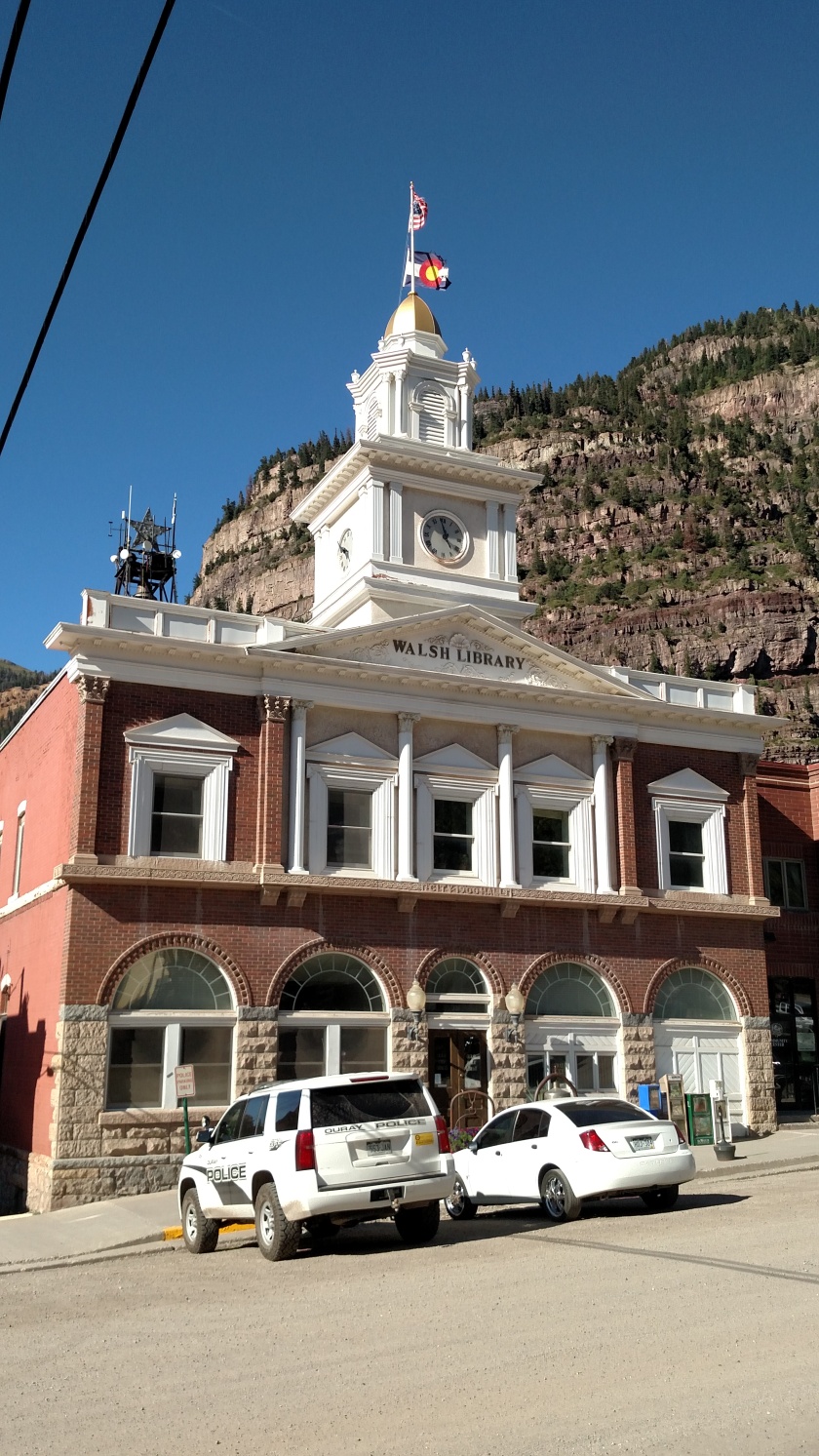 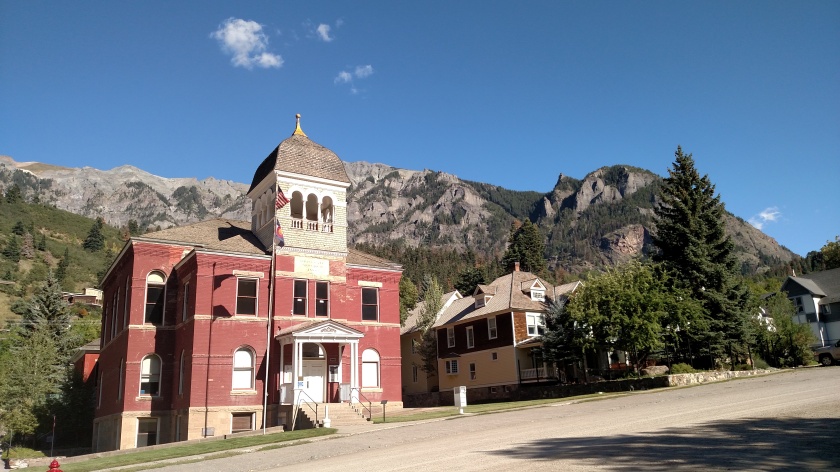 A NEW MASCOT FOR THE BLOG?  (Sorry, Regan)

I saw this adorable Australian Shepherd puppy resting in the shade on Main Street.  Well, he was trying to rest.  For some reason people just wouldn’t leave him alone.  Go figure….

I took this next photo (while stopped in the road, Shawn) heading south on Route 550 out of Ouray.

I stopped in the road for several reasons:  A) there was no traffic within sight behind me, B) I knew Shawn would be upset with me if I took another picture while driving, and C) I wanted to say a quick prayer before driving the next mile of Route 550 as I thought this might be the last photo I’d ever take.

Yesterday I drove north on 550 and before I reached Ouray I drove this treacherous mile of road on the “inside” of the highway (the lane between the hillside above and the canyon below).  The highway is nicely paved, and is in good condition.  There are signs that warn drivers that it is a rock slide zone and that they should not stop once committed to driving on it.  No big deal.

After reaching Ouray yesterday I turned around to go back to Durango.  Now I was driving on the “outside” of said road, right next to the canyon.  This short stretch of highway twists and turns as mountain roads often do.  This mile of highway has no guardrail.  This mile of highway affords the driver (probably the only person in the vehicle with his eyes open) a clear view of the straight-down drop into the abyss where he will plummet if he strays off the road.  And I mean STRAIGHT DOWN, not just a steep embankment.  You’d better not blow a 1.2 on the breathalyzer before you drive this road.  This mile of road shouldn’t even be legal.

Needless to say, I may have exceeded the very low speed limit slightly both days in my high anxiety haste to get past this God forsaken stretch of road.  Today I had made a big clockwise loop northwest from Durango and I was now at about the two o’clock position on a clockface heading towards 3 o’clock, hoping I would live that long.

After I calmed down I continued on my way.  I stopped at this yellowed-water waterfall, which I had driven past the day before (though I did post photos of the stream below it). 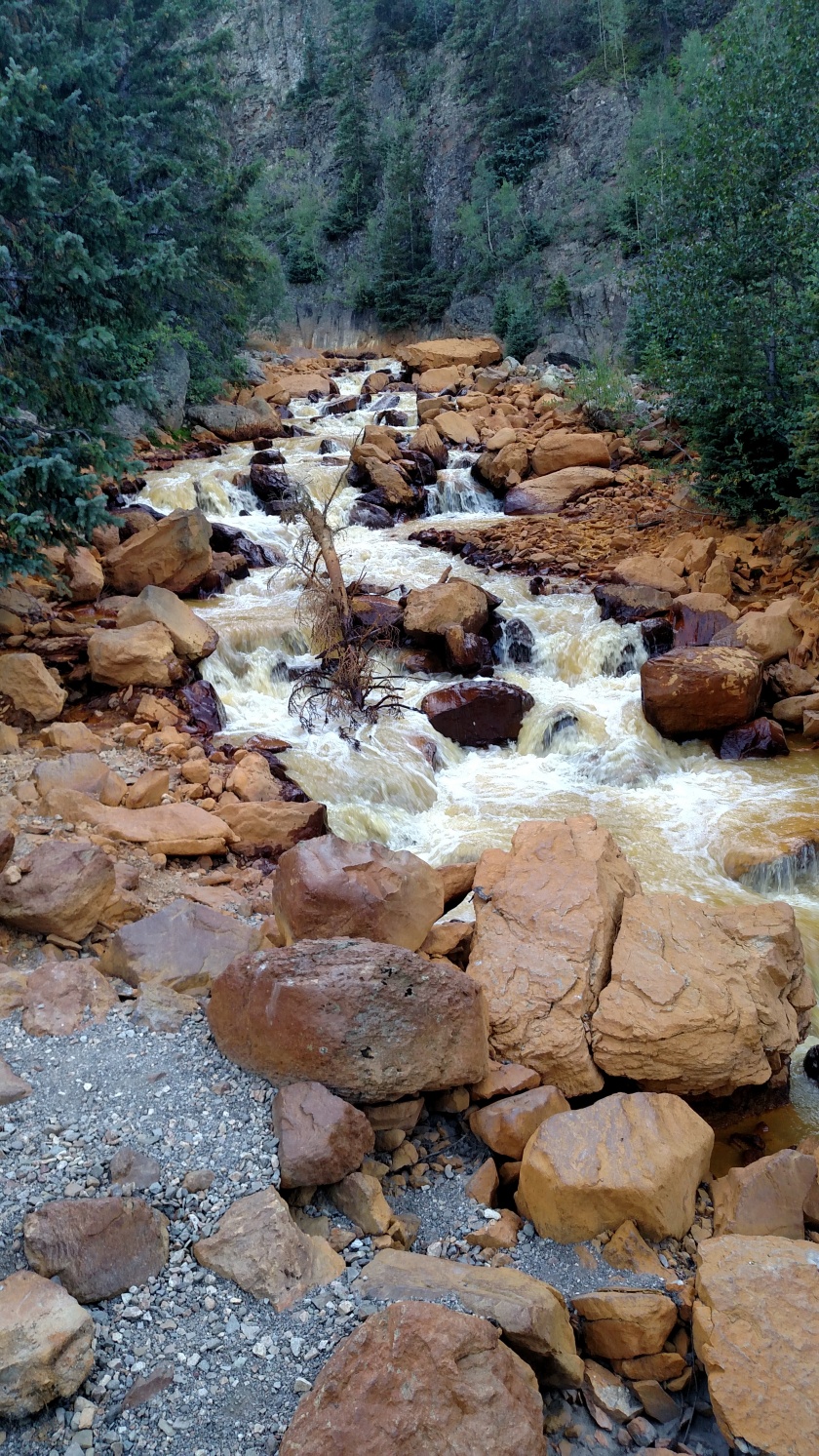 Looks like the blog will be able to continue.  Tomorrow I’m off to Mesa Verde National Park and the 4 corners area, not far from Durango (where Arizona, New Mexico, Colorado and Utah all converge at one point).