I mean catch up is a bitch.

Posted a few more things from earlier in the trip last night, but still have a serious backlog.  Have been in Rocky Mountain Park each of the last three days and continue to add to the list of pictures which I will get around to posting eventually.  Will go up to the Park for the final time this trip in just a little while (writing this at 718a local time, Saturday).

Moved the JohnBoy roadshow from Fort Collins to Breckenridge, Colorado yesterday evening and will be here one more night before heading further south to Colorado Springs for 4 nights.

Weather out here in Colorado has been spectacular.  I should have mentioned in the ominous “Winter is coming…” post the other day that that was an isolated incident.  The weather in Colorado is extremely changeable.  Conditions can improve or deteriorate VERY quickly.  Rain may occur near you, if not right where you are.  This time of year it rains a little just about every afternoon.  Temperatures at high elevation are brisk and there is often a stiff wind, but down below it is very pleasant.

The Colorado air is clear and refreshing.  Temperatures since I left Idaho have been much more agreeable.  I have the sunroof open every morning and evening (but shut it mid-day so I don’t burn my bald spot!)  The risk of wildfires in southern Wyoming and where I’ve been so far in Colorado is relatively low compared to where I’ve been the past few weeks.

In the interest of full disclosure, I had been debating ever since this happened whether I would share this story or not.  I really do feel bad about it, but after the day I tried to save the dazed and confused hawk who was laying by the side of a busy road (which I consider a yang moment for me even though he perished at the hand of another) I guess I’d better unload this yin moment which happened about 2 weeks ago.

This is a dove, the International symbol of peace.  They are attractive birds which making charming cooing sounds.

I’ve also determined that they are not the brightest or fastest animals on the planet.

Here’s what happened.  After having spent the night in La Grande, Oregon I had driven south to the town of Baker City with the intent of making a scenic loop west of the highway.  As you may recall from an earlier post, I had to abandon that plan due to a wildfire along that loop road which would have forced me to backtrack.  I decided to take a shorter, more direct scenic road back towards La Grande.  That road took me to the little town of Haines.

As I was driving along I noticed some doves in the road ahead of me.  Generally birds will fly away before you get to them so while I probably lifted off the gas slightly as a gut reaction, I proceeded.  Well, as the doves took flight one of them decided he must have dropped his house keys in the road and turned right around and landed in front of me.  He misjudged my closing rate and poof… he was toast.  There were feathers everywhere.

It made me think of a conversation I had with a woman when I was at Crater Lake National Park, where we were discussing the suicidal butterflies.  Her remark was “If God had wanted them to live longer He’d have given them bigger brains”.

Back when I was staying in Boise I made two trips north to the town of McCall, which is about 2 hours away.  McCall is on the northern end of one of my scenic roads.  I also had to pass through it on my way to the portions of Hell’s Canyon I had been expecting to see originally.

McCall is a town of about 3,000 people located on the southern shore of Payette Lake.  It is a resort town and the lake is a popular site for various forms of recreation.

Before I even got to the lake I was struck but the extremely colorful display of wildflowers which were located on the corners of major intersections outside of town.  They consisted of probably the most impressive variety I have ever seen.

Another thing which impressed me about McCall was the flag system they used in town at intersections where pedestrians have the right-of-way.  There were flag stations on each corner and when you wanted to cross the street you removed a flag and used it to indicate to drivers that you were crossing.  You then put it back in the flag station on the other side of the street.  Pretty clever.  I have never seen that system used before.

And there was another reason I wanted to visit McCall.  As many of you know, I am a big NASCAR race fan.  There is a driver named Brian Scott who had competed in the upper eschelon series of NASCAR (Truck, Xfinity and Cup) for several years.  He was almost always sponsored by Shore Lodge in McCall Idaho.  Well as it turns out, his family OWNS Shore Lodge.  Oh, and he and his family are descendents of the Albertson family which founded the Albertsons grocery store chain, the second largest in the United States after Kroger.  So that’s why little Brian can go racing on weekends.  Daddy has deep pockets.  It’s the same reason Paul Menard, who’s father owns the Menards hardware store chain (like Home Depot and Lowes) and is the wealthiest person in Wisconsin, races.

And inside Shore Lodge was this amazing aquarium.

I figured it was about time I let you meet my traveling companions which are allowing me to traverse and document this incredible journey.

This is my Motorola Turbo Android smartphone which provides the majority of the photos you have seen.  It takes excellent quality full frame pictures. 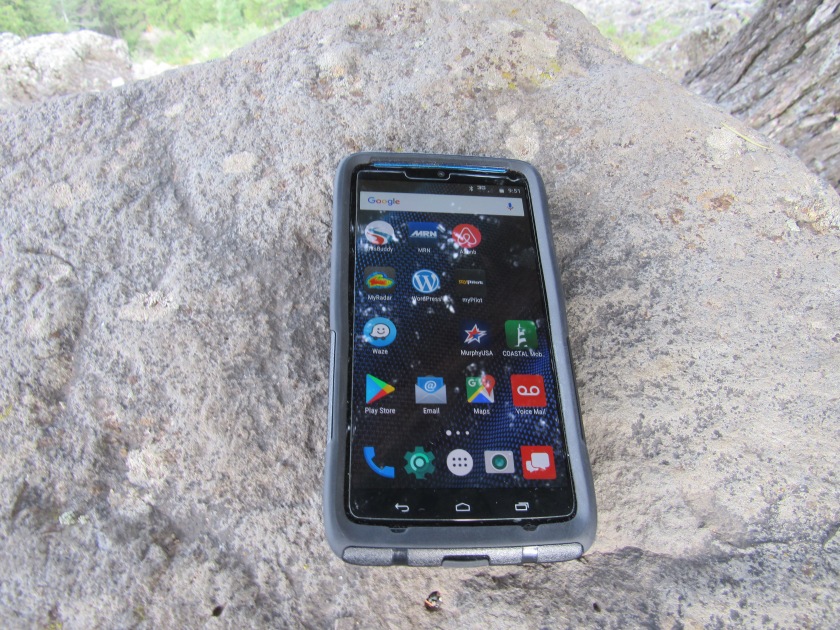 And this is my Canon PowerShot SX 530 HS digital camera.  I acquired it about halfway through my visit to Yellowstone when I became disenchanted with the quality of the zoom pictures my smartphone was taking. 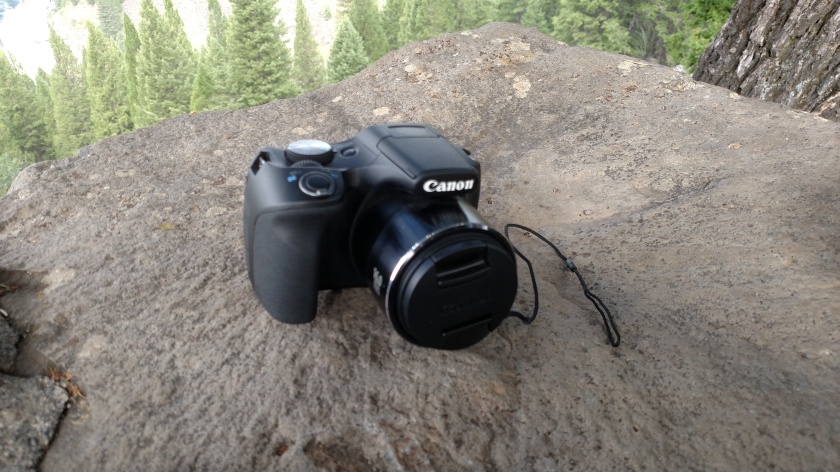 And I couldn’t get to some of the venues I have seen without the aid of my 3rd GPS unit, a Magellan RoadMate 5322LM.

She’s currently on probation, though, and may very soon suffer the same fate as my first two GPS units which were both tossed out the driver’s window when I got frustrated with them. It’s not looking good…

After spending the night in Rexburg, Idaho I headed north towards the town of Island Park to find my first scenic road of the day.  As I drove north I could see the Grand Teton mountain range to the east, silhouetted by the morning sun.

When I turned off the main road I entered Harriman State Park where I would soon find Mesa Falls.  After parking near the Visitor Center I took a walkway out to the falls.  It allowed me to get up close and personal with the peak of the Upper Falls.  You will see the walkway at the bottom of the first picture. 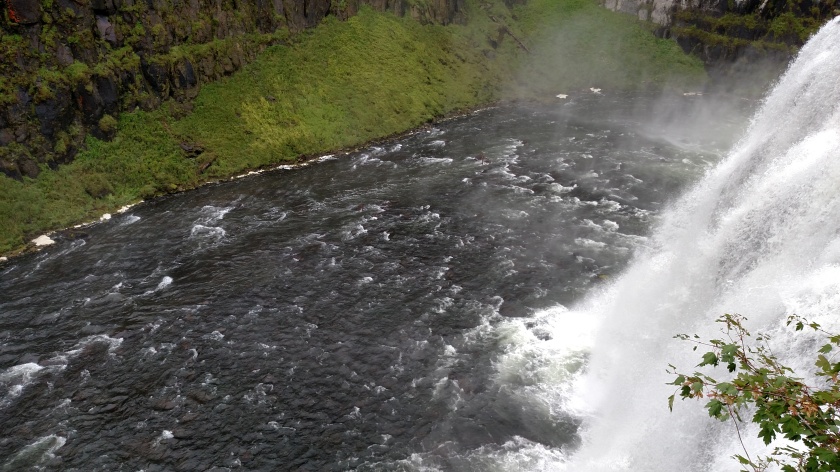 This is all taking place on the Henry’s Fork of the Snake River.  The Falls drop 114 feet, the height of a 10 story building.  At maximum flow, over 2.6 billion gallons of water flow over the Falls each day.

The Upper Falls were following by an Intermediate Falls….

…. and then I had to drive further down the road to another overlook where I could see the Lower Falls well below where I was standing. 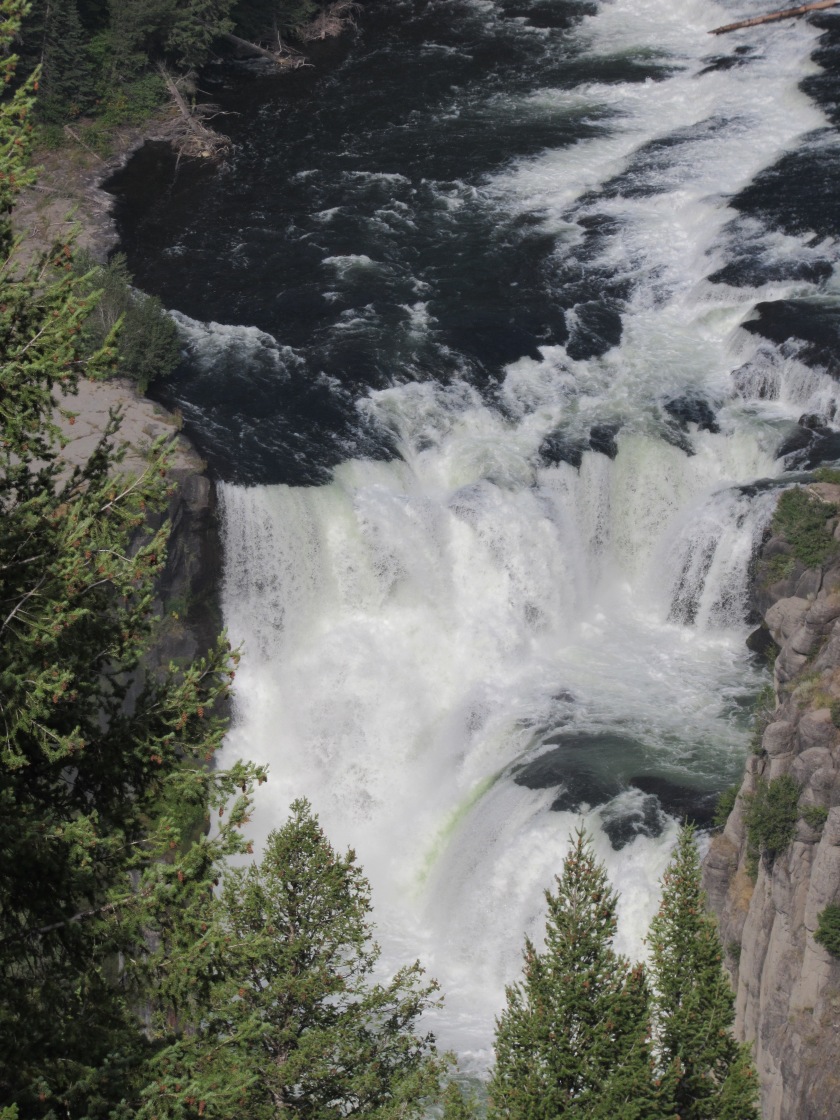 After visiting Mesa Falls I continued south towards Ashton.  From there I would proceed further south to the town of Idaho Falls where I would find the second scenic road of the day.  When I got out of State Park I had been in I came to the tiny Warm River.

I’ve decided this is the house I want to live in before becoming a mountain man in the Crazy Mountains of Montana.

And although the river has all kinds on rules which would make it seem like you can’t have any fun there….

…. this little guy was just having the time of his life feeding the ducks.