Before starting on today’s activity I want to revisit a post from a few days ago.  There are several venues within the Newberry Volcanic National Monument, one of which is the caldera, or area inside the rim, of the volcano itself. I posted pictures earlier in the week of the Big Obsidian Flow and explained that it was a huge lava field (approx one square mile).  Well today I saw a picture taken from overhead which clearly shows the size and scope of the Flow.  The photo I saw was on a travel kiosk along a nearby scenic road which highlighted many attractions featured in the area.  I found the picture online and it appears below. 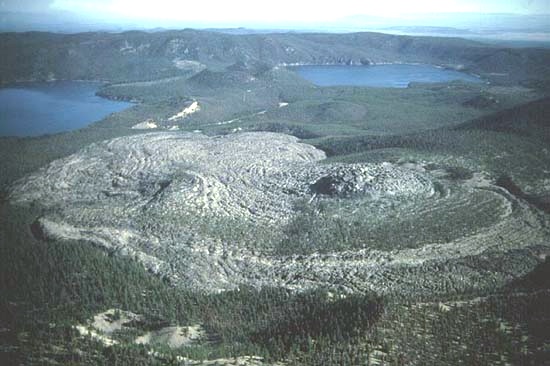 The light colored area in the foreground is the Big Obsidian Flow (I told you it was big) and the two lakes in the background are Paulina and East.  Everything you see is located within the rim of the volcano (which is REALLY big). 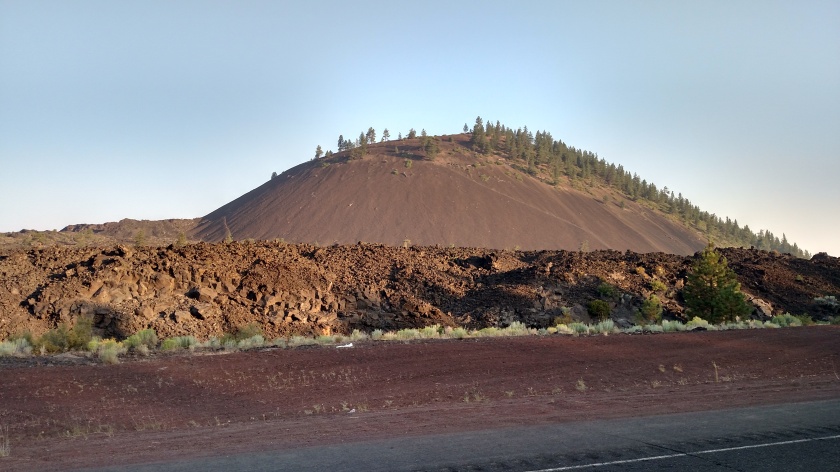 This 500 foot tall butte is right along Route 97, just south of Bend.  I have passed it several times this week as I traveled down to Crater Lake.  It is part of the Newberry Volcanic National Monument.  Traffic was light the morning I took this so I was able to cross two lanes of the highway without becoming roadkill.

I found the picture below online which shows the butte from the air.  I think is an absolutely breathtaking photograph.

I have another butte picture (I can hear y’all out there snickering) which I will post tomorrow. 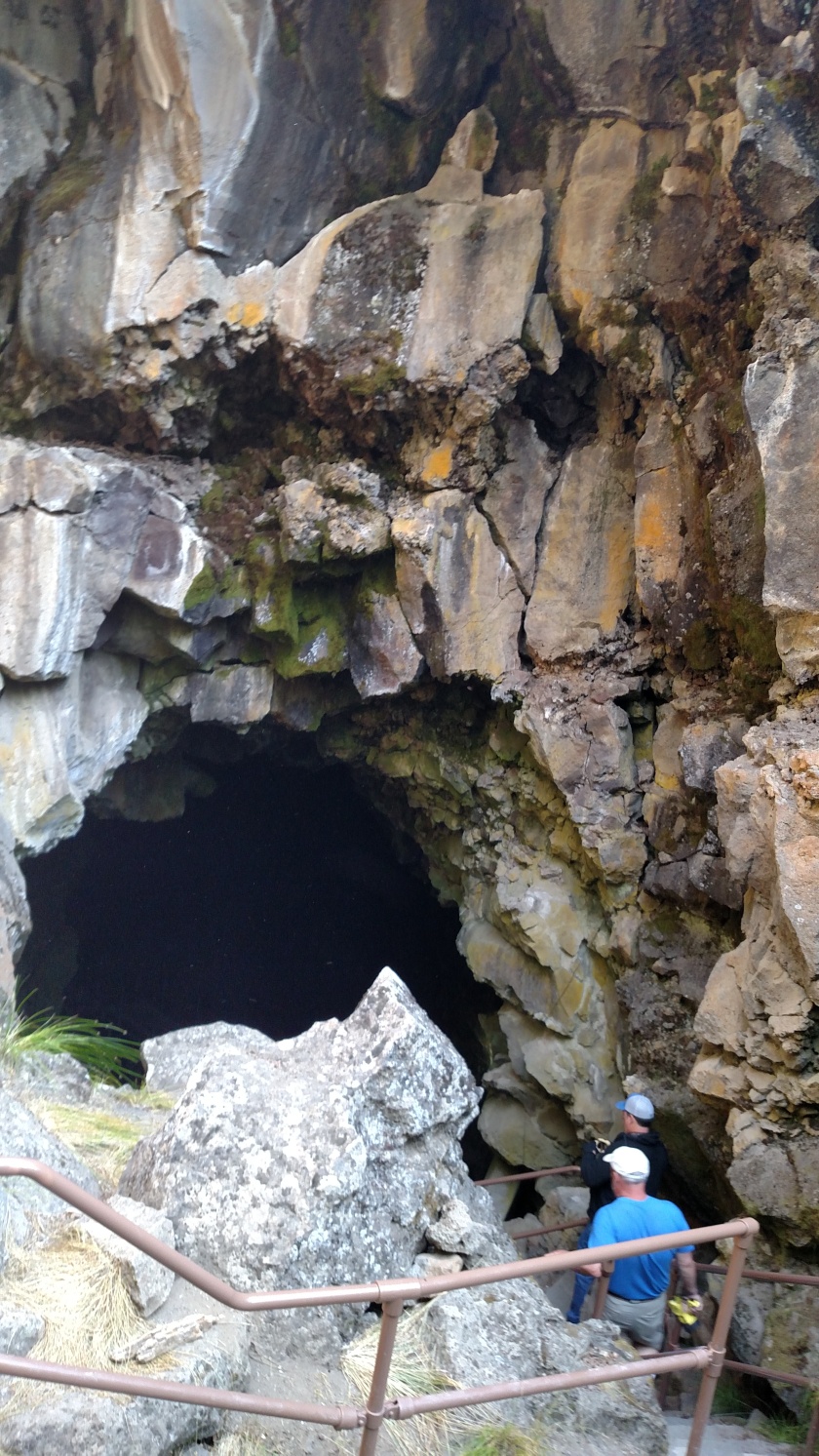 On my last full day in Bend I decided to visit this cave, which is just south of the Lava Butte shown in the previous post.  The mile long cave maintains a constant temperature of around 40 degrees, cooler than most caves, I presume, because it is lava and not conventional rock.  Having learned a lesson when I visited Mammoth Cave in Kentucky last year I arrived at this cave before it opened at 9 o’clock.  (When I was at Mammoth the daily temperatures were up around 100 degrees and EVERYONE wanted to be down in the cave where it was a constant 54 degrees.  All the tours there were booked so I never saw the cave).

While I was waiting outside the gate I struck up a conversation with my new friend Erich, a fellow traveler who is also visiting the area.  I talked his ear off as we walked through the cave together on the self-guided tour and before we parted I told him about this blog.  About a hour after I started my next activity he sent me a message saying that not only had he looked at the blog but that it has inspired him to start one of his own!  That is the ultimate compliment.

I recommended that he go to the McKenzie Pass Scenic Byway (the Observatory, butterflies, etc) which I had seen earlier in the week, which he did.  He later sent me a message suggesting that I visit the Lava Cast Forest, which is where he went after touring the cave and before going to the Pass.  That wasn’t on my list but I did make it back to Bend in time to stop there about an hour before sunset.

My pictures from inside the cave aren’t worth a damn so I won’t bother posting them.  It was a neat cave, though.

And no, Erich is not the guy in the picture. 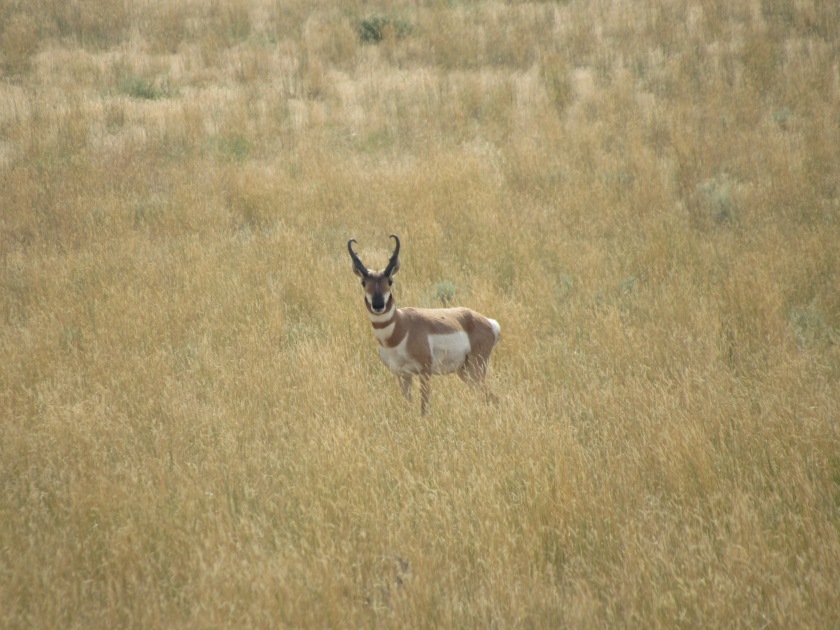 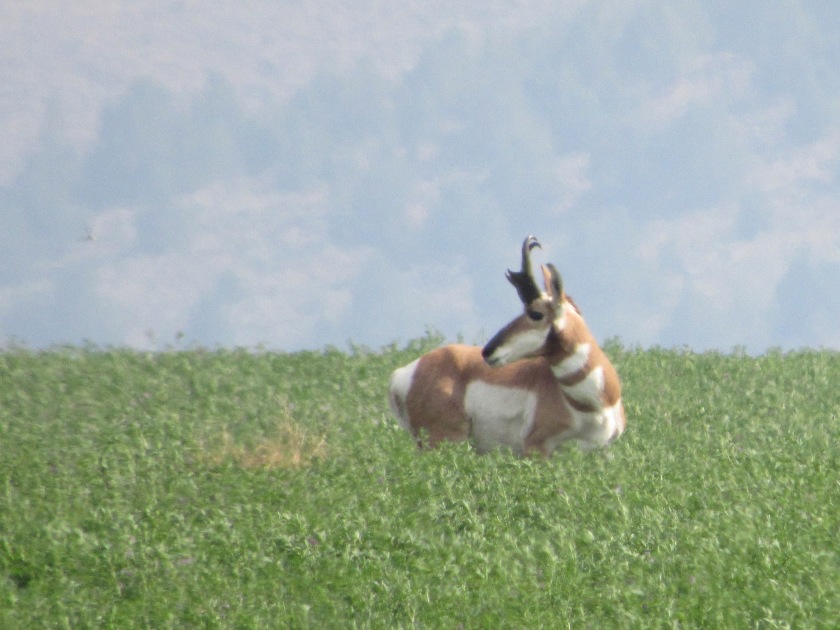 After visiting the cave I took a nice 3 hour drive south on another one of my scenic roads.  Today’s drive was Route 31, aka the Oregon Outback Scenic Highway (what a cool name), which goes from La Pine, south through Silver Lake, Summer Lake, Paisley and on to Lakeview before reaching the border with California.  Because I was now in the High Desert the scenery was very different from other parts of Oregon I had driven through this week, and once again the temperature reached 100 degrees.

When I reached Lakeview I turned around and headed back towards Bend.  Shortly after leaving Lakeview I spotted this lone pronghorn (antelope) wandering in a field about a quarter mile to my left. 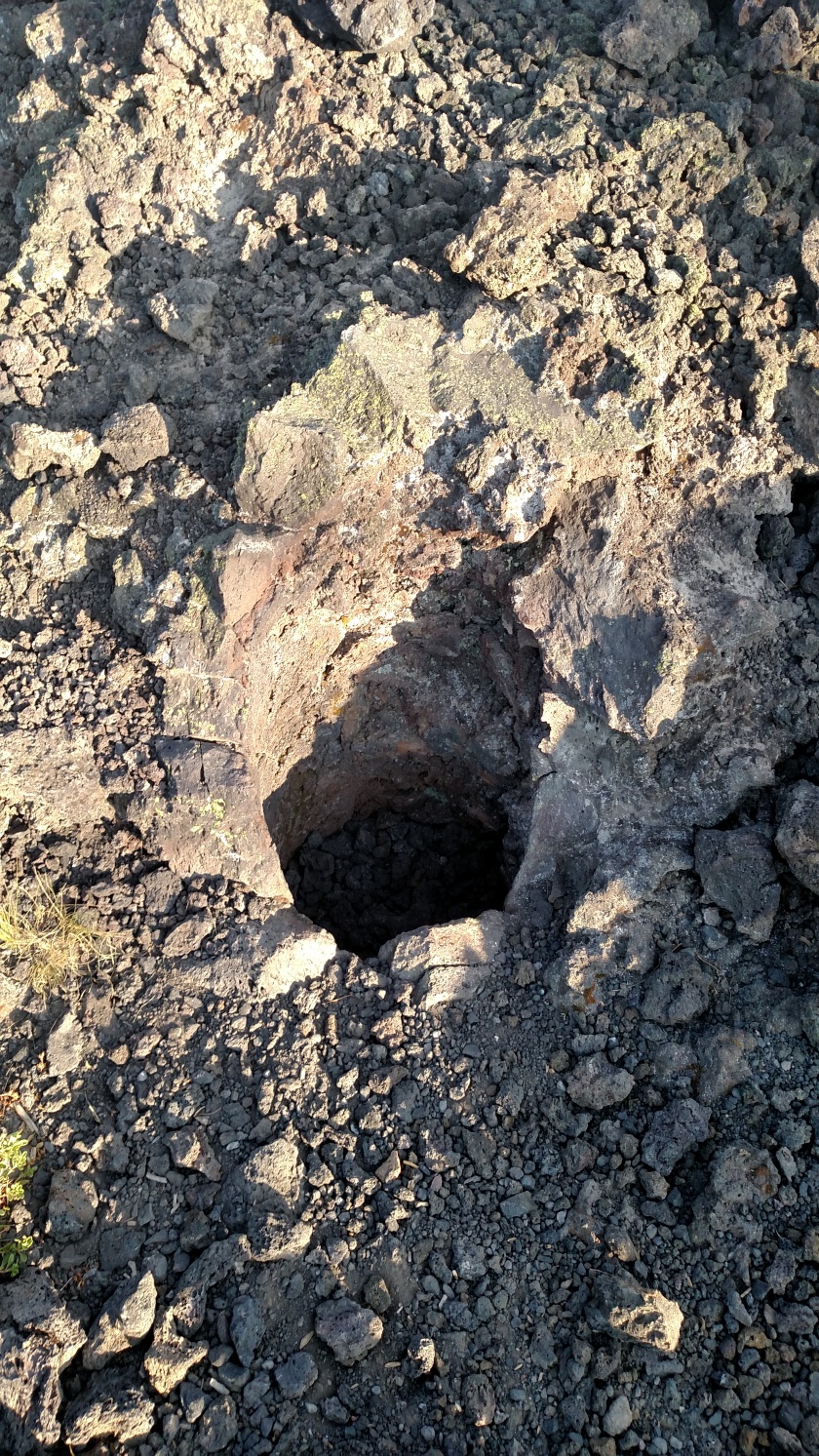 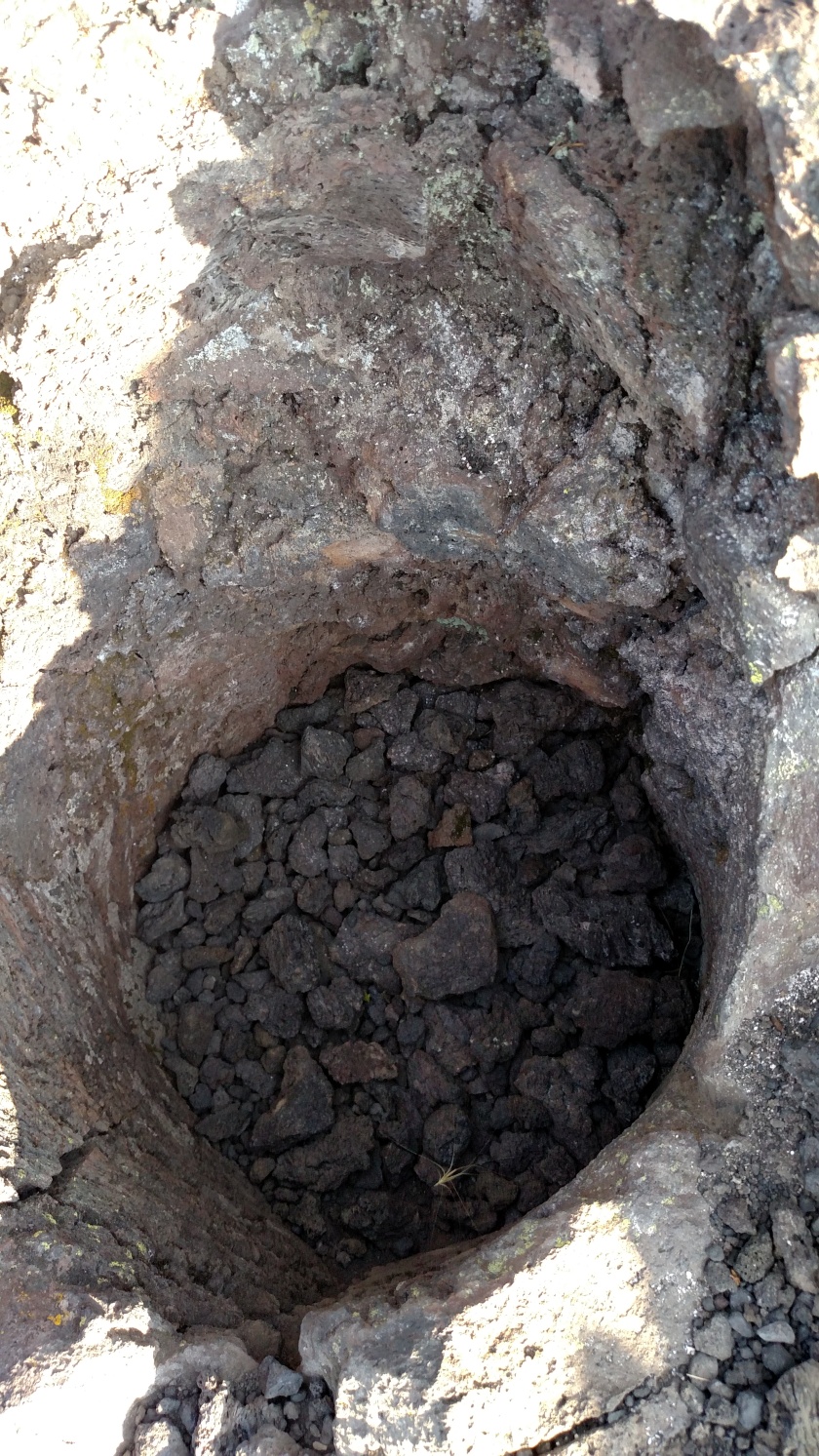 After completing my scenic drive to the south I stopped at this venue which is part of the Newberry Volcanic National Monument complex.  The forest covers an area of about 5 square miles.  The main attraction at this site are the holes in the ground left by the trunks of trees which had been encased in volcanic lava.

When the hot lava flowed around the trees the superheated wood produced steam which cooled the lava, which then hardened around the base of the trees.  Eventually the wood from each tree rotted, leaving behind a “cast” of the tree’s trunk, hence the name of the Forest.  The top photo shows such a cavity in the ground.  Because of the late day shadows I got closer to show the inside of the hole.  There were lots of these holes, in various sizes, along the one mile walking trail.

Although the trees rotted away, the roots, which are entombed in lava rock which now covers the surface, are said to still be found below ground. 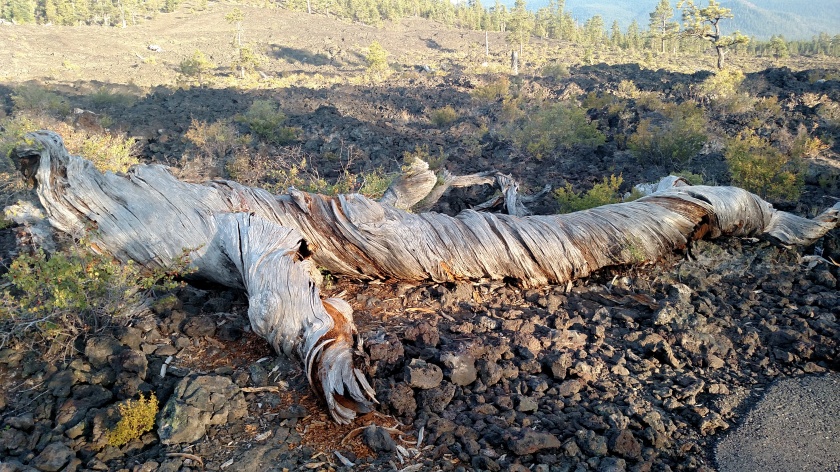 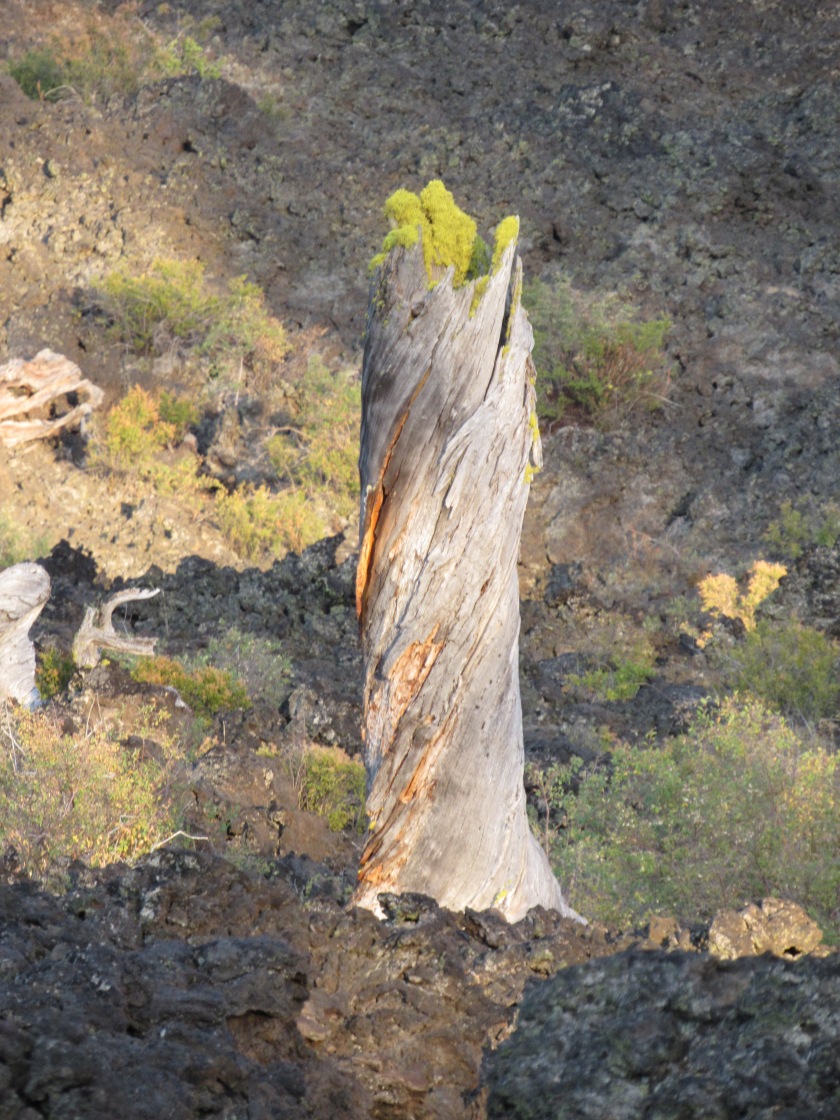 Because new growth still occurs within the Forest many trees develop twisted trunks.  This is because the roots have to find unusual paths through the lava rock below and for some reason, and perhaps because of the reaction with the lava rock, this contorts the trunks as the nutrients from the roots are fed to the tree. 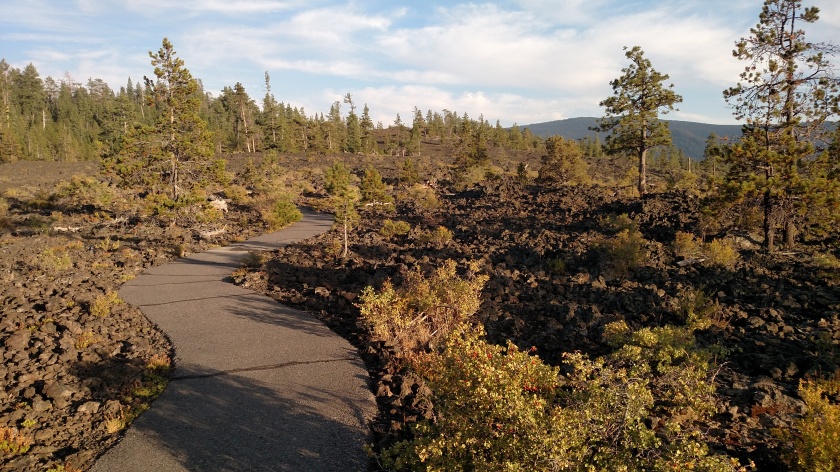 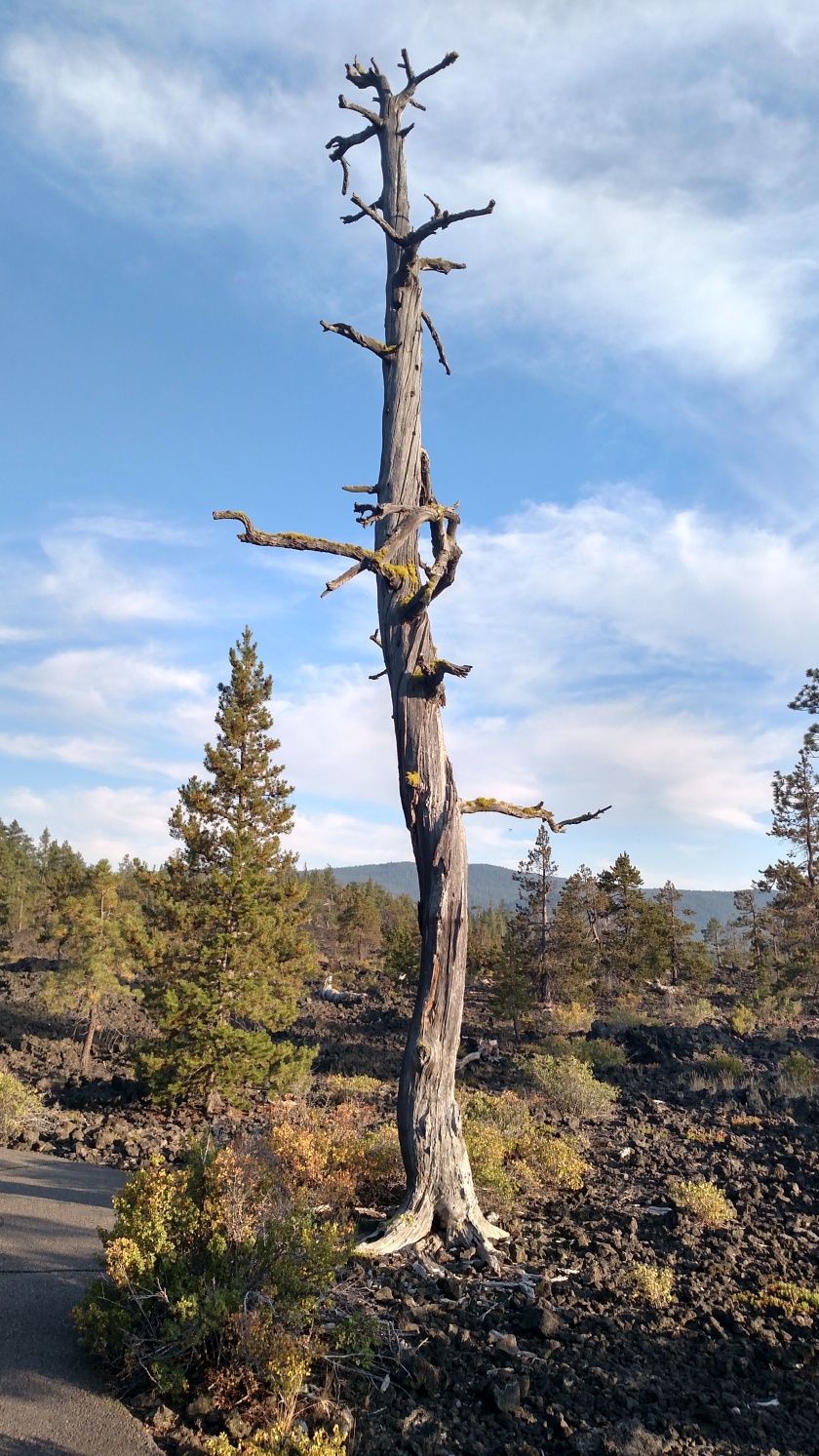 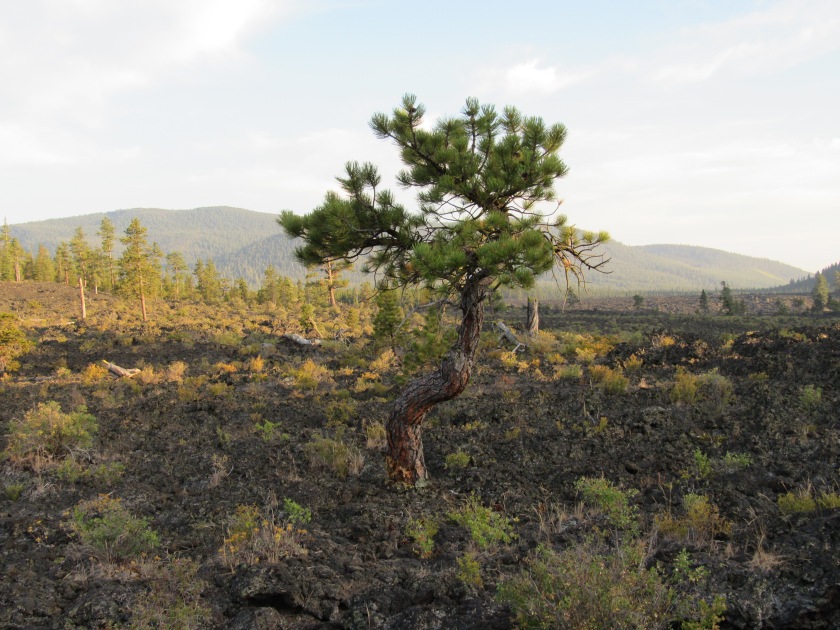 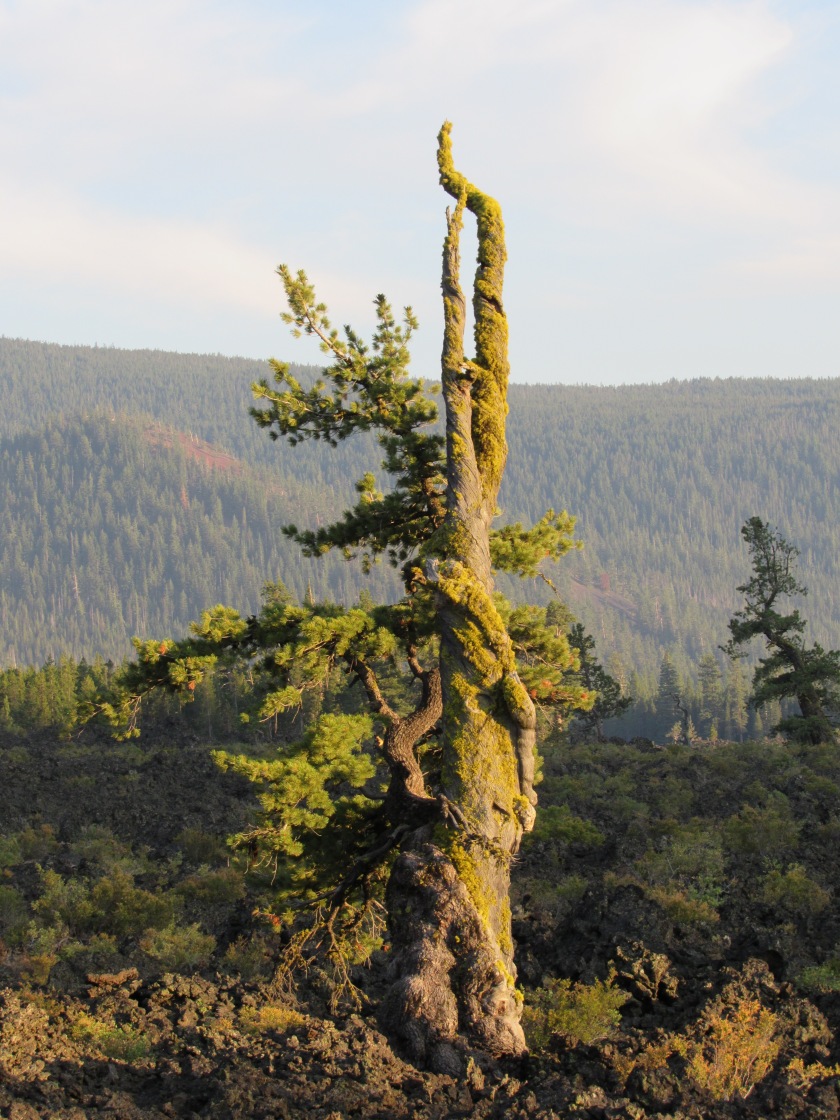 I took these around 7 o’clock this evening while walking around the one mile trail at the Lava Cast Forest.  I thought it was pleasantly cool when I arrived here (it was 100 degrees where I was earlier in the day).  When I got back to my car I discovered it was only 77 degrees and that the Forest is up at 5,845 feet elevation, hence the cooler temperature.

And thank you again to my new friend Erich, who recommended that I visit the Forest.  I’m very glad that I did.