At 11,239 feet peak elevation, Mount Hood is the tallest mountain in Oregon.  This photo was taken near the top of the road leading up to the mountain from Route 26.  I have a surprise for you at the end of this road… 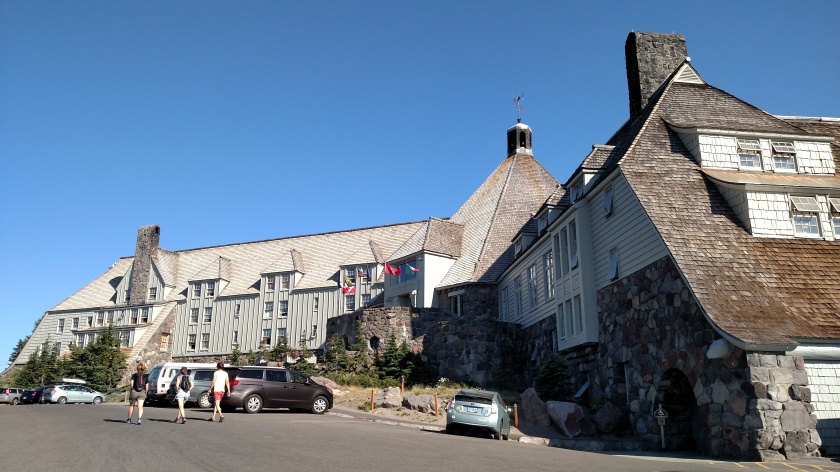 This hotel is located right at the base of Mount Hood.  Literally.  It is a ski resort.

This hotel appeared in the opening sequences of “The Shining,” the original 1980 classic starring Jack Nicholson and Shelley Duvall, as “The Overlook Inn”.  It is one of three hotels in the United States which have some connection to that film.

The Stanley Hotel in Estes Park, Colorado was the actual inspiration for the Stephen King novel.  It has the maze which was featured in the movie.  I believe it was also used for some of the exterior shots.  When I get home I plan to buy the original, uncut version of the movie and watch it again, paying careful attention to the exterior shots.  I’ll be in Estes Park in a few weeks so you’ll be seeing more photos of the Stanley Hotel in future posts.

The third hotel, the Ahwahnee, was in Yosemite Park in California (I don’t believe the hotel exists any more), and was the basis for the interior scenes in the movie.  The hotel interior used for the movie was constructed in a studio in England and the majority of the movie was actually shot there.

When I came out of the hotel the view looking south from the front steps would have been spectacular… on a clear day.  As you will see in the next few posts, this was not a clear day. 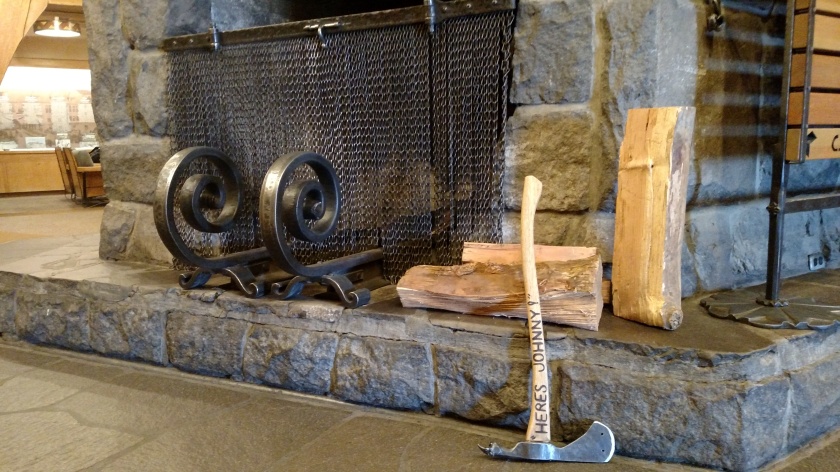 I asked the young man at the front desk if there was anything in the hotel that talked about how it was utilized in the movie.  Without hesitation he hauled out this ax from behind the counter.  He said, “Here, take this anywhere on the property for pictures, just bring it back,” so I marched right across the lobby and took this shot next to one of the fireplaces. 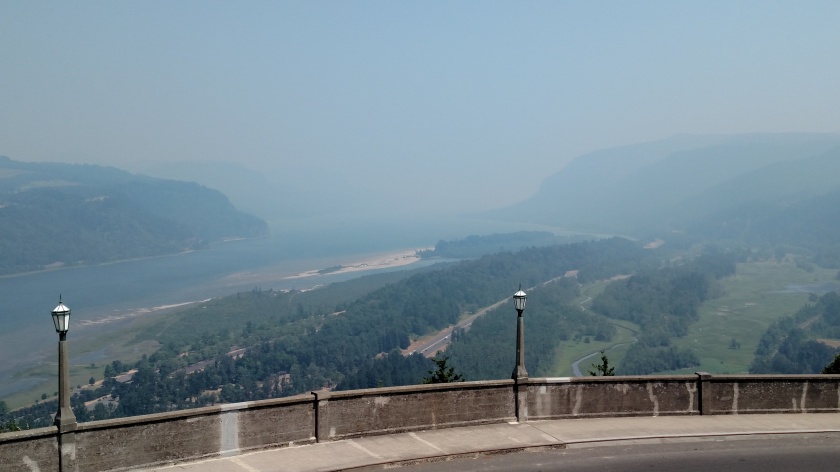 This building is located on an overlook high above the Columbia River (on the Oregon side).  Normally this would afford the viewer a very nice vantage point from which to see the river, looking from east to west.  Well, maybe on a clear day….

As you can see from the bottom photo the smoke has arrived.  Big time.  When I was up here at the river just 5 days ago the air was clear and I could see Mt. Hood off in the distance (when looking from the Washington side).  Not today.  And this isn’t just morning fog that hasn’t burned off yet, this was about 130 in the afternoon local time.

I’m glad I got the river pictures last Saturday when I was up here!

As I was walking down the trail to see this falls I was thinking ahead to what I was going to say in this post.  Without having yet seen it I thought I’d say something to the effect, “yeah, but the one in North Carolina is nicer…”.  Well, this one’s not too shabby.  I think we just need to agree to peacefully coexist.  They each have their own merits.

I have seen falls named Bridal Veil in several states (there was one at Yellowstone). I got talking with a woman on the trail on the way back to my car who is from California and she said there is a very nice Bridal Veil Falls at Yosemite. 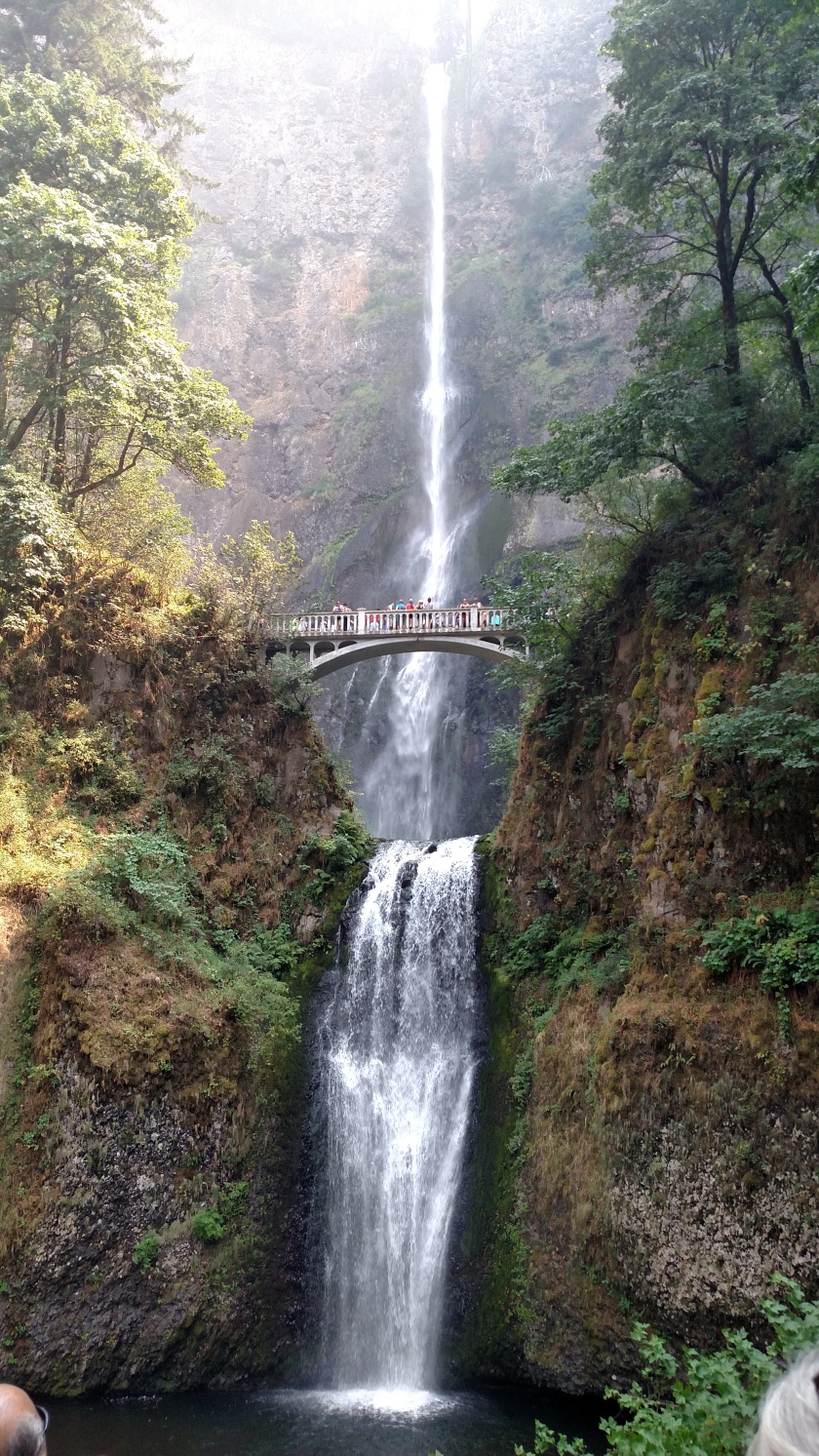 This is the tallest waterfall in Oregon and is located just off old Route 30 which runs parallel to the Columbia River, separating Oregon and Washington.  It was PACKED with people and I was incredibly lucky to get “rock star” parking, as a car was just pulling out of a parking space right in front of the Visitor Center.

The Falls drop a total of 620 feet.  The upper portion is 542 feet, then there is a gradual 9 foot descent (below the Benson pedestrian bridge you see in the middle of the photo), and finally the last 69 foot drop right in front of the observation area.  Very impressive.

As I headed southeast back to Bend from the Mount Hood area I had the most bizarre experience I’ve ever had while driving.  Once I got down off the mountain and the road leveled out I realized that the visibility on either side of the road was noticeably worse than it was just a few hours earlier (views of major mountains I had seen in the morning were now completely obstructed).  The closer I got, the heavier and more brownish this haze became.  I’ve never been in a sandstorm, but from what I’ve seen in movies this is what it looked like I was approaching.  The brownish haze got so heavy that I turned my headlights on (to be seen, not to see) and light colored cars coming the other way looked like they had brown dirt on their hood and windshield (just a reflection).  Really, really weird.  Well, it was just smoke and once I passed through it the haze became more grayish and visibility improved, somewhat.  The photos were taken after I passed through it, one showing the southern edge and the other the northern edge.