Tuesday when I drove over to La Grande from Portland I got off the highway just before reaching La Grande to look at an historic bridge (see yesterday’s post).  As I retraced my route to get back on the interstate I noticed a truck parked next to the road and three people, all looking up through binoculars at about a 65 degree angle.  I parked my car and got out to see what was going on.

Meet Perry the mountain goat.  That is the name the locals have given him because they always see him on the same hillside just off the Perry exit.

I went back the next morning to take a picture of the mountain so you can see how high up he was and how steep it is.  The first photo is from the interstate, before getting off on the exit ramp.  I stopped the car but took the picture through the windshield because I didn’t want to exit the vehicle in highway traffic.  The light coloration above the sign is a reflection of part of my dashboard over the speedometer.  We were looking at the mountain from the bottom of the exit ramp, looking right-to-left towards the right side of the mountain as seen from here.

The next photo was taken at the vantage point we were watching  from.  There is a dark green tree a little to the right of the center of the picture.  Perry was higher than that, and to the left, just below the group of dark trees near what appears to be the top of the mountain from this position.

And after a little while another white mountain goat appeared about half way up the mountain.  The people I stayed with in La Grande told me that apparently Perry now has a little friend (actually a big friend.  Both of them were fairly substantial).

I started Thursday by embarking on my first scenic drive of the day, heading south from Boise, through the little town of Kuna and on towards Murphy.  After I passed through Kuna (pronounced CUE-na) the roadside was lined with farms.  There were sheep…  moo cows… horses…

Yup, you read that right.  A frickin two-hump camel standing in a field in southwest Idaho. 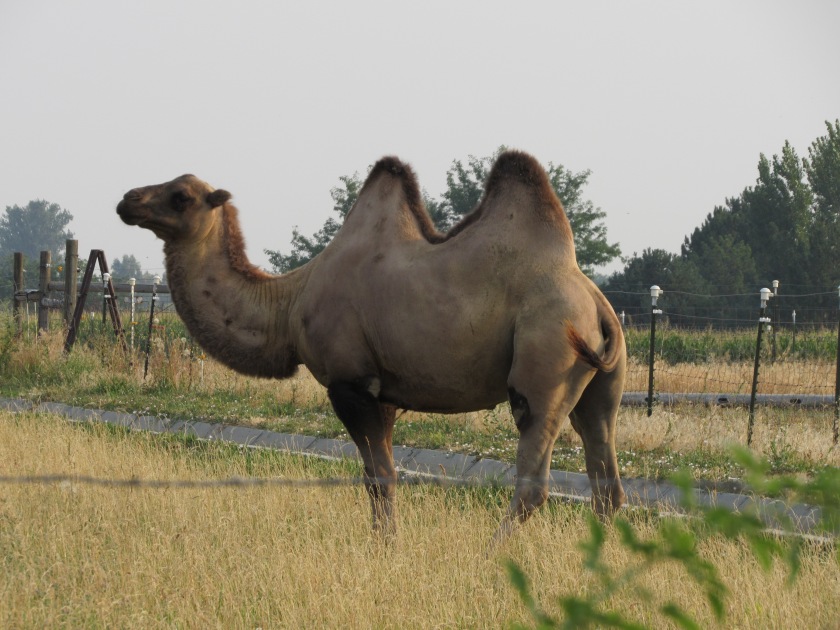 He was in a huge field, all by his lonesome.  I hope there was another camel nearby to…. uh…. keep him company. 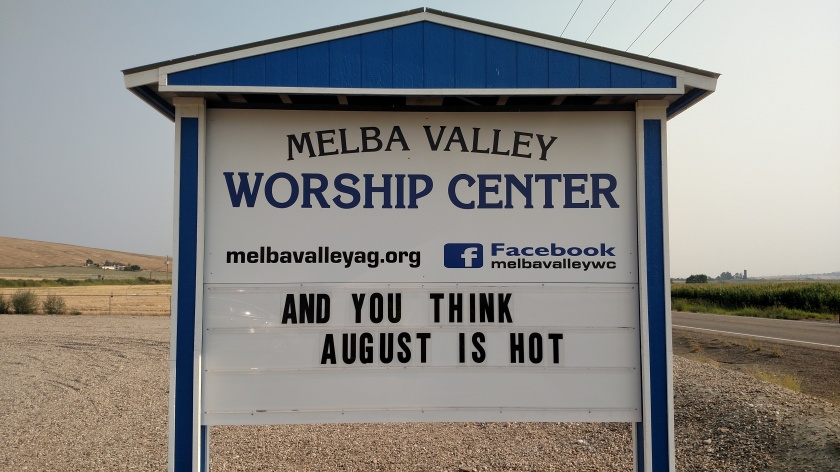 I saw this sign in front of a church as I started heading back to Boise from my first scenic drive of the day.  The church was near the little town of Melba.  I won’t make the obvious joke about toast.  Well…. I guess I just did.

Keep in mind that this region of the country has been suffering from unusually hot temperatures the last few weeks.  It has been 100 degrees or higher many days, whereas this time of year it would normally be in the low 80’s.  I thought that made this sign especially clever.

As I was returning to Boise from my first scenic drive of the day I noticed a bird laying on the white line on the opposite side of the road.  It’s head was just over the white line in the travel lane.  I stopped my car and went back to see if it was dead or alive.

It had been laying down flat, like it was covering eggs in a nest.  When I approached it it stood up, but remained exactly where it was on the white line.  I found a long stick by the side of the road and went back to try nudging it away from the road surface, at which point it extended it’s wings to appear larger and more menacing, but it still stayed right where it was.

Meanwhile, there were two other hawks up on telephone poles screaming like crazy (to scare off predators, I suppose).  At one point while I was trying the stick routine I noticed the shadow of one of those hawks circling overhead.  I decided to back off so it didn’t swoop down and pluck my eyes out.

I stood by the road for a while so traffic approaching on the hawk’s side of the road would move towards the other lane, but shortly after I took these pictures a truck hauling a trailer couldn’t move over because of a vehicle coming the other way and struck the hawk.

I tried my best but I’m afraid it just was meant to be.

Here are two pictures I found online which show what Wallowa Lake would look like on a clear day.  Online source information or photographer credit appears after each photo.

The next picture should be from about the same angle as the photo I took which barely showed the center mountain (through the haze) inside the V created by the mountains on either side, although this picture was taken from a hillside looking down on the lake, not the road from which I took my photo.

Here are some pictures I found online which show what the view from the Hell’s Canyon Overlook would look like on a clear day.  The online source or photographer credit appears after each photo. 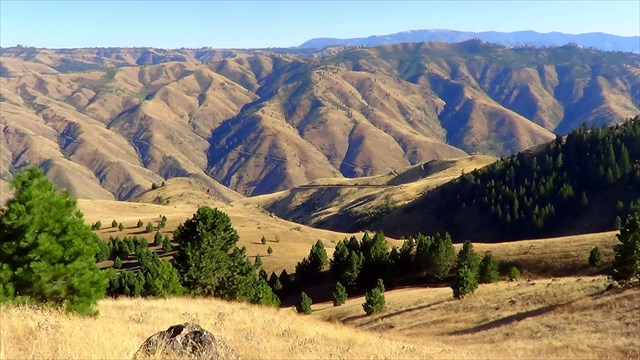 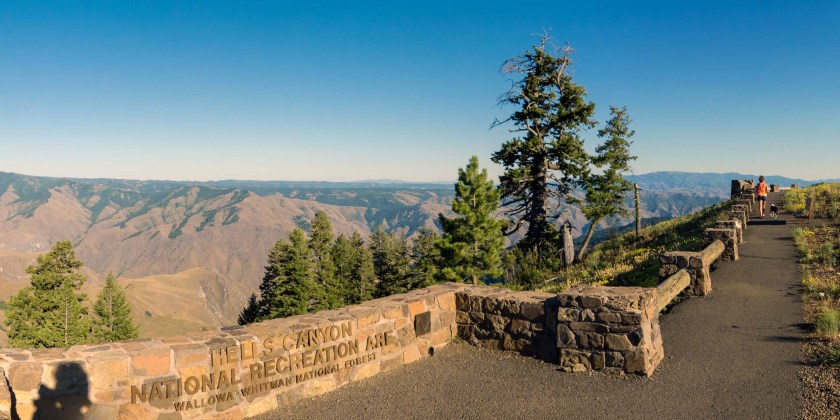 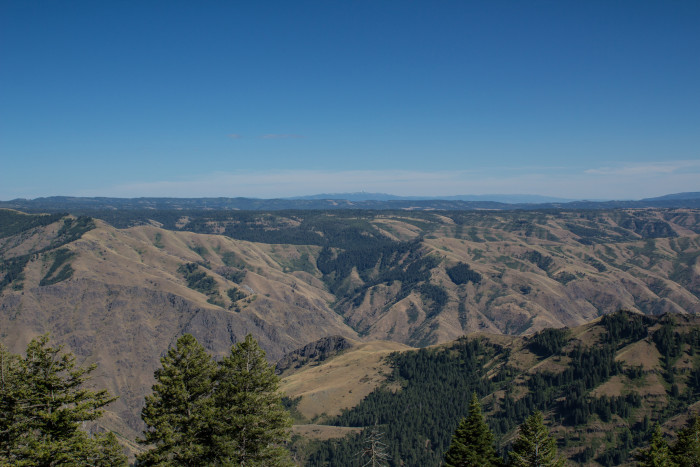