This being “eclipse day” I thought it was the perfect time to post these photos.

A few weeks ago, after driving south from Washington down to Oregon, I posted a few pictures from in and around the Maryhill Museum.  It is on east/west Route 14 on the Washington side of the Columbia River, near the intersection with north/south Route 97 on which I was traveling that particular day.  The day I took this I was driving east on 14 and came across this memorial shortly after passing Route 97.

This is an exact replica of Stonehenge in Wiltshire, England.  As you can see, this version is fully intact.  The original Stonehenge was built with precision, as it was used by people of that era to observe specific celestial events, measure time and mark the seasons of the year.  Every stone needs to be in a very specific place. 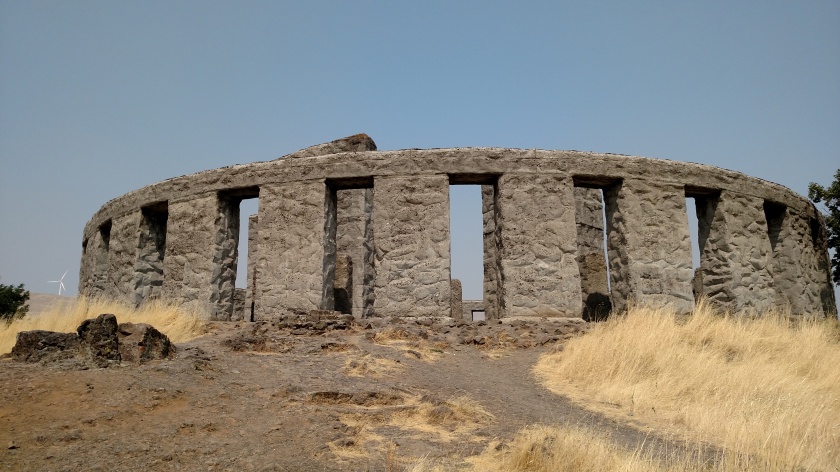 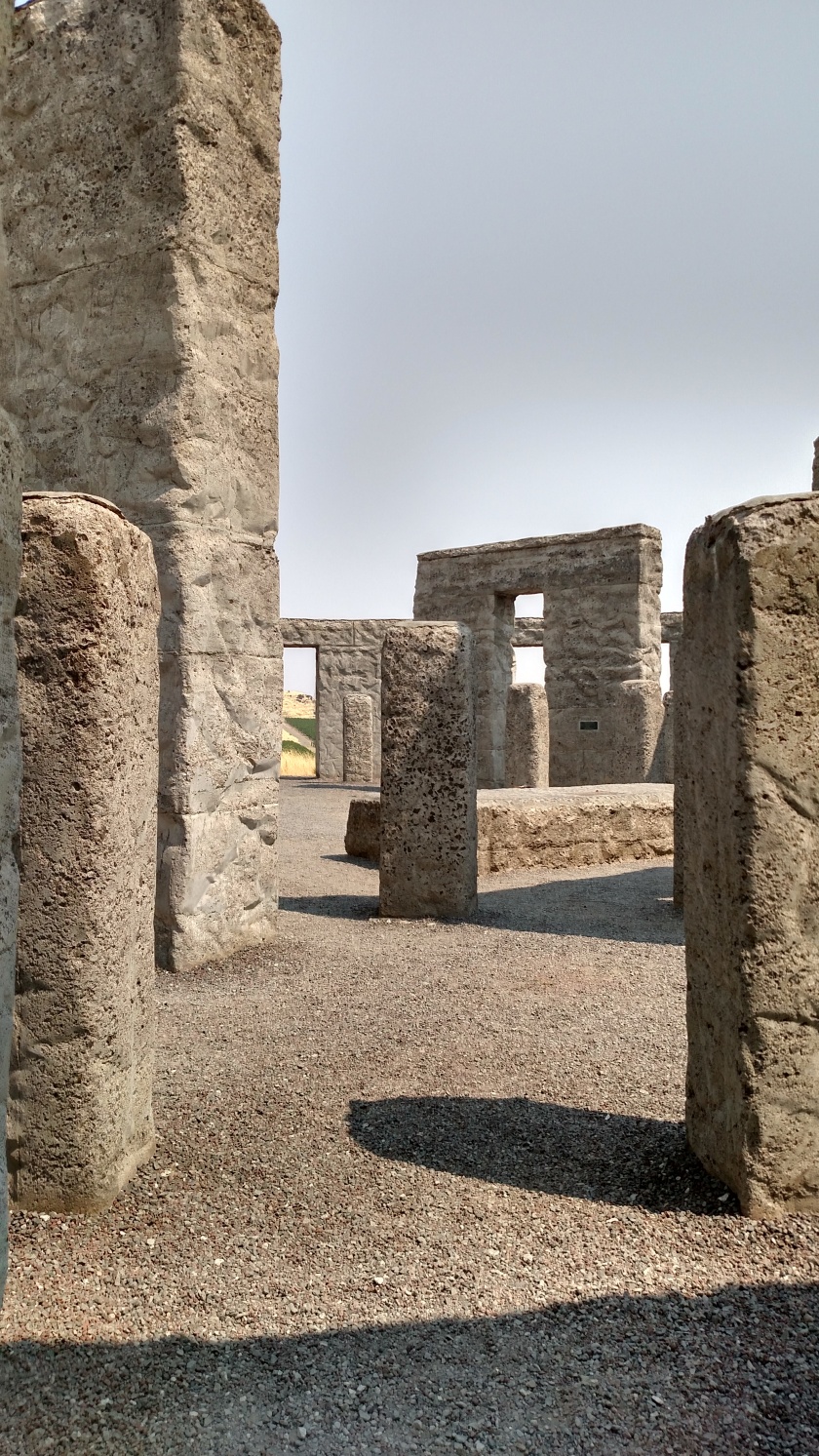 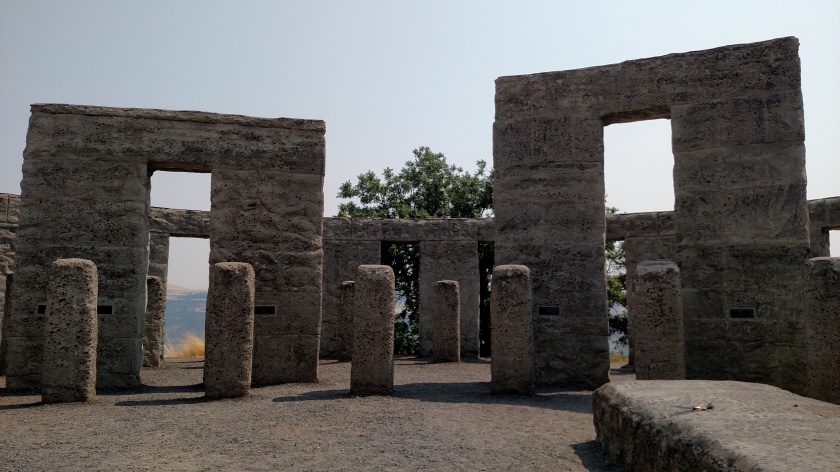 This monument was constructed (from 1918 through 1929) as a memorial to soldiers who served in World War I.  There is also a memorial nearby dedicated to local men and women who perished in other, more recent conflicts.

Those of you who have been following this blog from the beginning know that one of my very first posts, back in early July, was of a thing called “Carhenge,” located near Alliance, Nebraska.   Ironically, Carhenge, and Alliance, are in the direct path of today’s total solar eclipse!

These are from a sign which explained the purpose of the monument and why it was constructed with such precision. 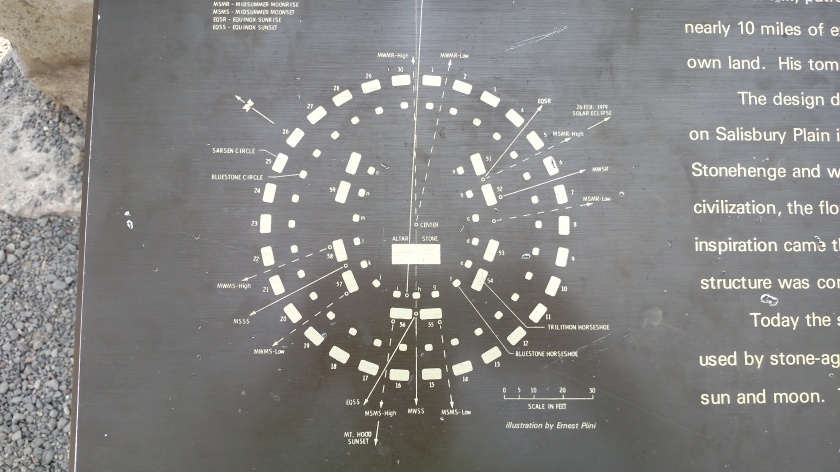 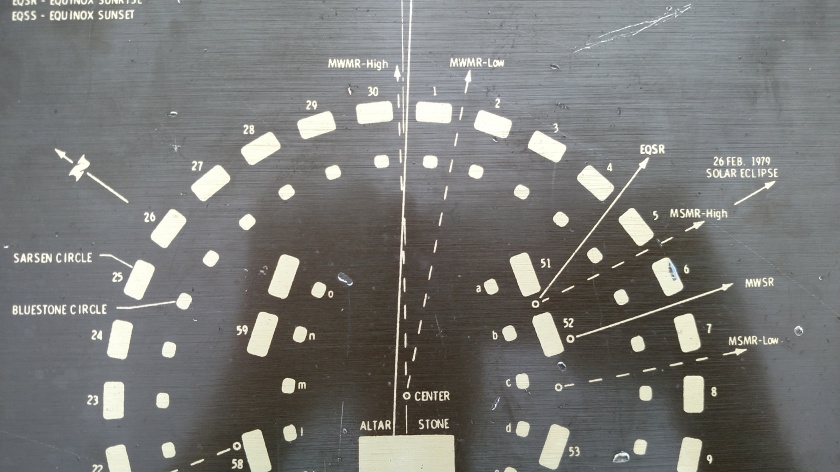 I came across this on the Washington State side of the Columbia River Gorge a few weeks ago.  It was in the little town of Bingen.

As George Takei (who played Mr. Sulu in the original Star Trek TV series) used to say in one of the commercials he did for a particular TV brand, “Oh my!….”

As I was taking pictures the day I approached Craters of the Moon National Monument in southern Idaho, I discovered this portable toilet laying on it’s side well below the road surface and out of sight of passer-bys.  I hope no one’s inside!

Can you image what the company which owns it is thinking?  Now why would someone steal one of our portable toilets???

The first photo is of what is undoubtedly the most photographed thing in the town of Jackson, Wyoming.  Yes, there are some pretty photogenic mountains just north of town, but I’m talking about the town itself. 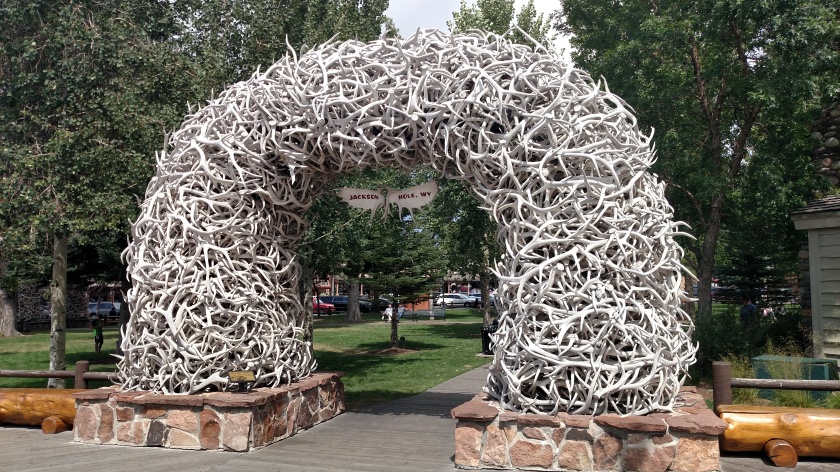 This is one of 4 arches, one at each corner of a one-block city park in town.  What you are seeing are elk antlers.  Lots and lots of elk antlers.

Then, as I was passing the aforementioned mountains north of Jackson (in the Grand Teton National Park), I saw this military aircraft taking off from the Jackson airport. 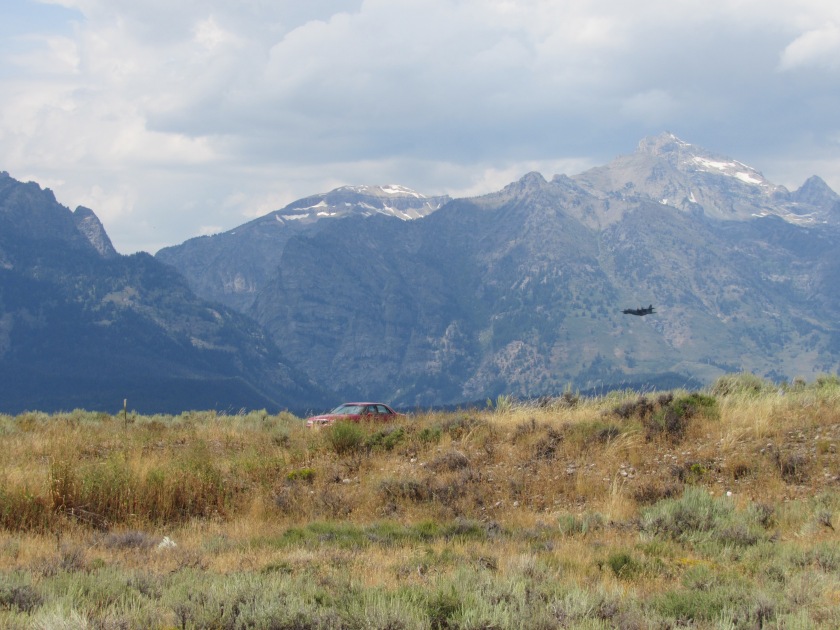 I was hoping to see a passenger jet take off or land (it’s a regular airport and I saw jets on the ground) but I was pressed for time and couldn’t wait for that to happen.

As I was driving southeast on Route 287 in northwest Wyoming I noticed this large object way up on the top of a mountain to my left (this photo was taken using quite a bit of zoom.  It was WAY up there, and it is REALLY big).  Does anyone have a clue what this thing is?  I assumed I’d be able to Google the location and figure it out but I’m coming up blank. 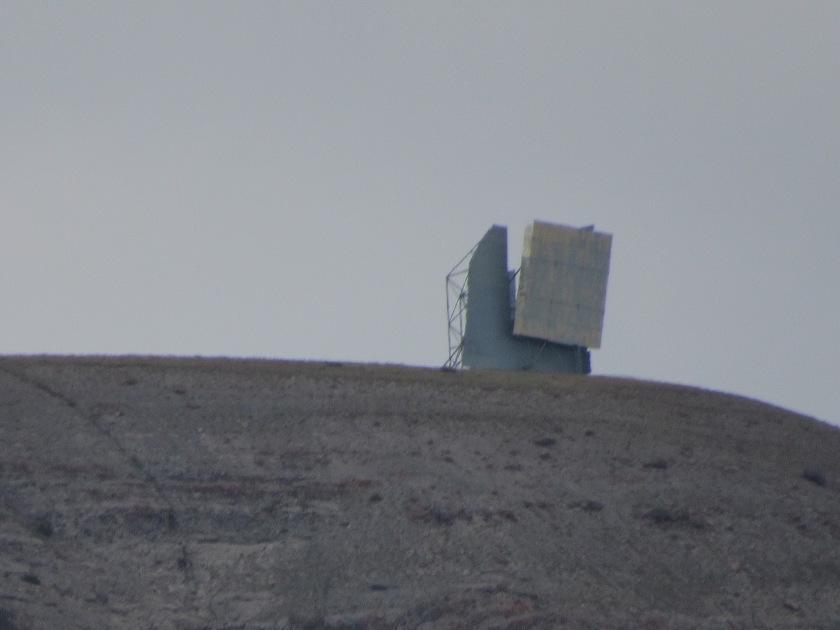 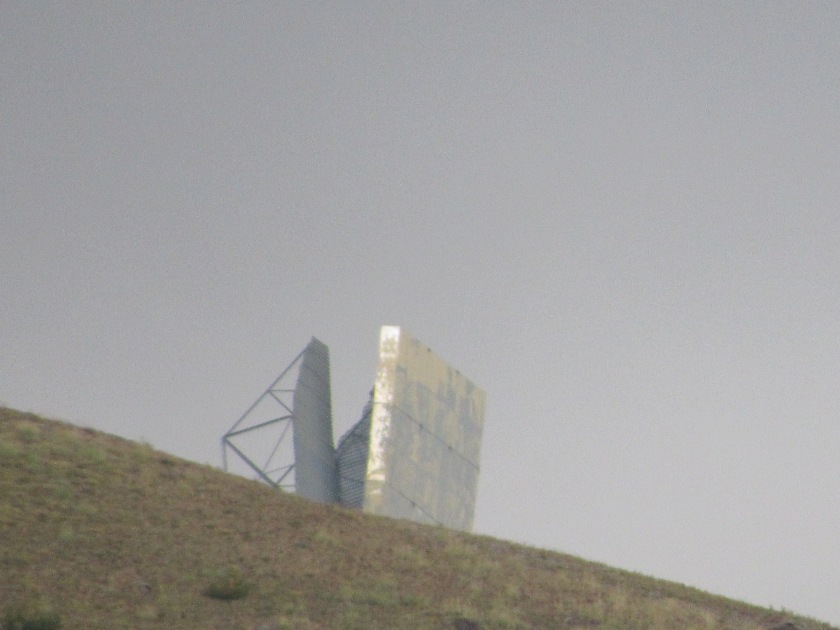 It almost looks like a huge drive-in movie screen.  I think it might be some type of reflector for transmission signals.  I’m really stumped.

After leaving Jackson, Wyoming I headed north past the Grand Teton mountain range to the little town of Moran.  There I took Route 287 southeast through western Wyoming down to the little town of Rawlins, along Interstate 80, where I got a motel room for the night.  I intended to get to an Airbnb in Laramie, Wyoming where I had a reservation but for various reasons I didn’t make it that far (my first no-show in 2 1/2 years) and I let the host know by e-mail not to expect me.  We had been exchanging messages throughout the day about my increasingly late ETA.  I stopped by the house in Laramie the next day to apologize in person.

The northernmost part of Route 287 was on my list as a preferred scenic road but let me tell you, it was pretty awesome all the way to Rawlins (well, until it got too dark to see how awesome it was). 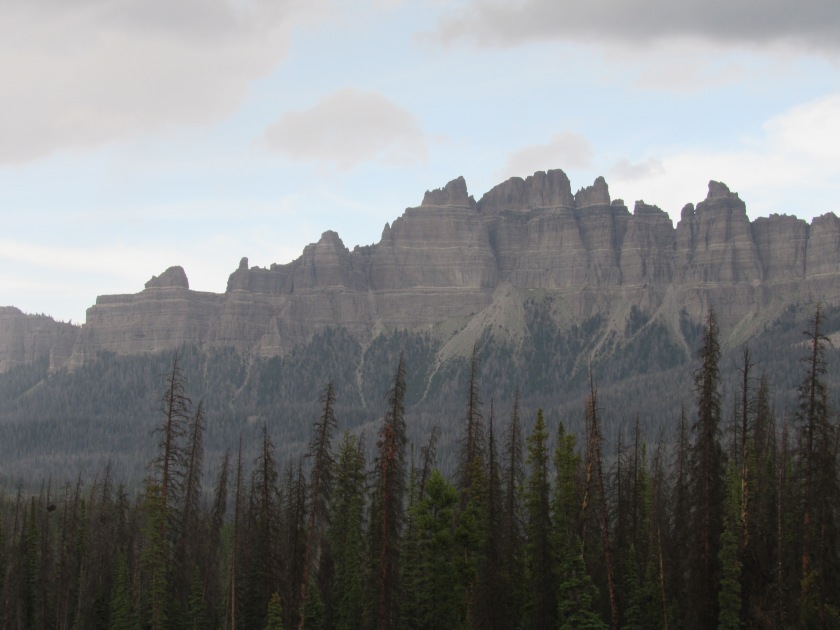 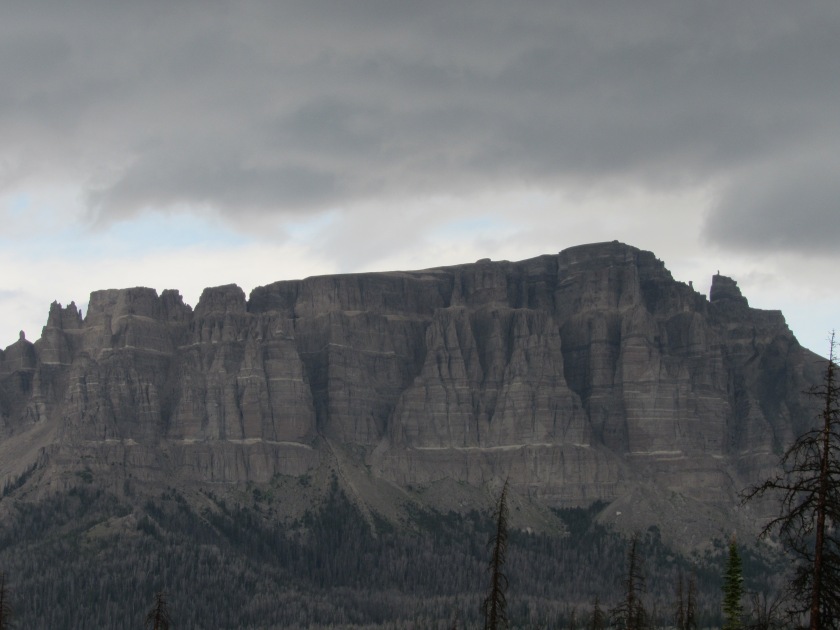 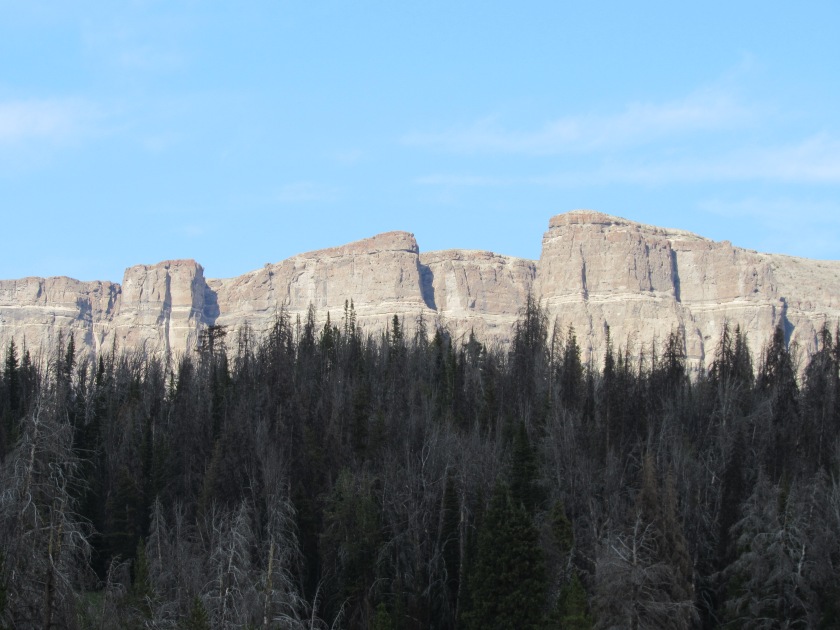 As you can see from many of the photos, a storm system was in the area (fortunately is was moving away from me).  As I was nearing the split where Route 287 would branch off from Route 26 I saw this curious atmospheric phenomena.  As the sky lightened after the storm had passed, a light colored cloud reached towards the ground.  This cloud was quite far ahead of me so it had to have been very large.  Rainbow-like colors, the full spectrum from red to violet (remember Roy G Biv?), appeared in this cloud.  I have seen it once since then, but the one I saw this day was a first for me.  There was no conventional rainbow, just the wide cloud which was reflecting colors from the setting sun.  It was really cool.

And right before the sun was about set I saw these little guys when I stopped at a rest area. 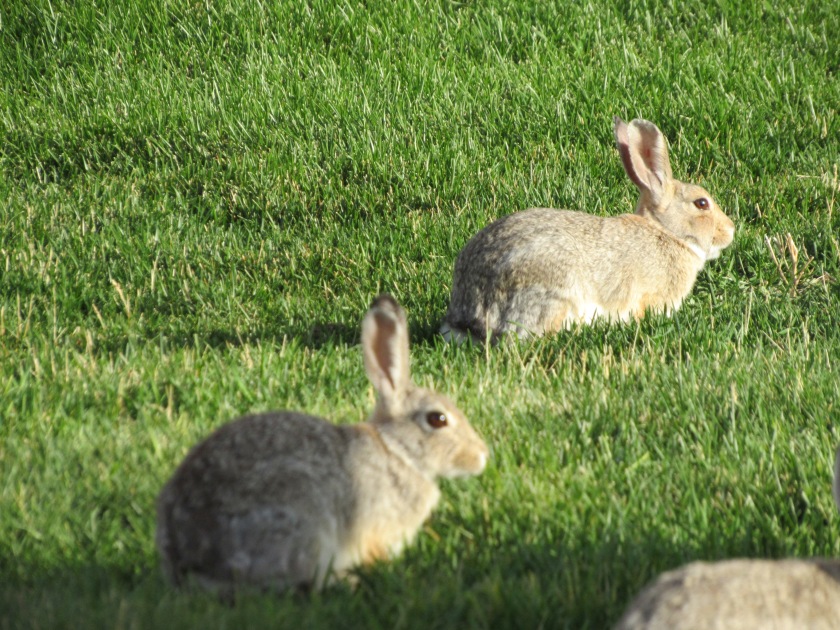