Before I get started on today’s activities I forgot to mention yesterday that as of Tuesday night I have been on the road for 6 weeks (halfway through my original planned schedule) and have logged 17,203 miles!  I am going to be extending my trip in to the early part of October before heading back east.

This morning I drove south from Fort Collins to Loveland, Colorado, then turned right and headed west on Route 34 towards Rocky Mountain National Park.

I saw this rock formation which is called “The Profile.” 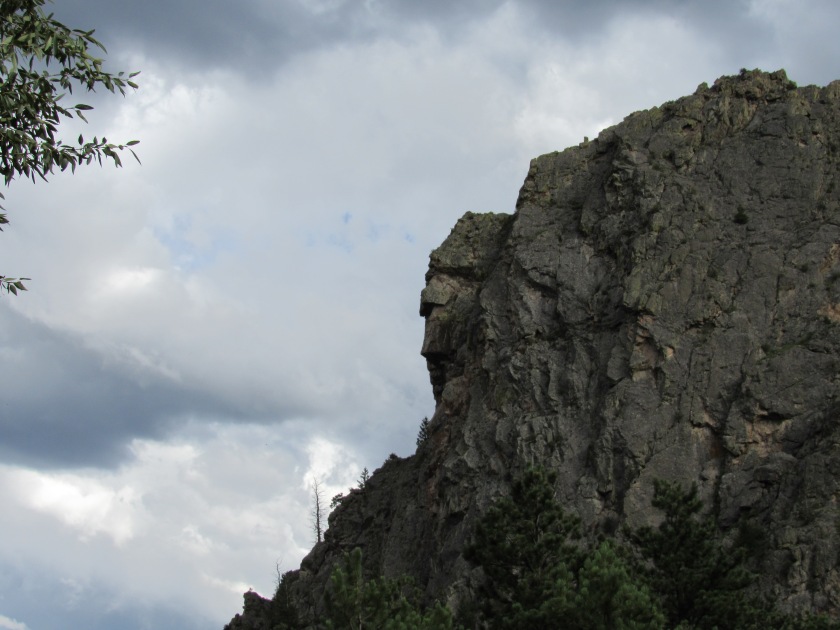 Next I drove past an incredibly long stretch of the Big Thompson River which was cascading down just left of the highway. 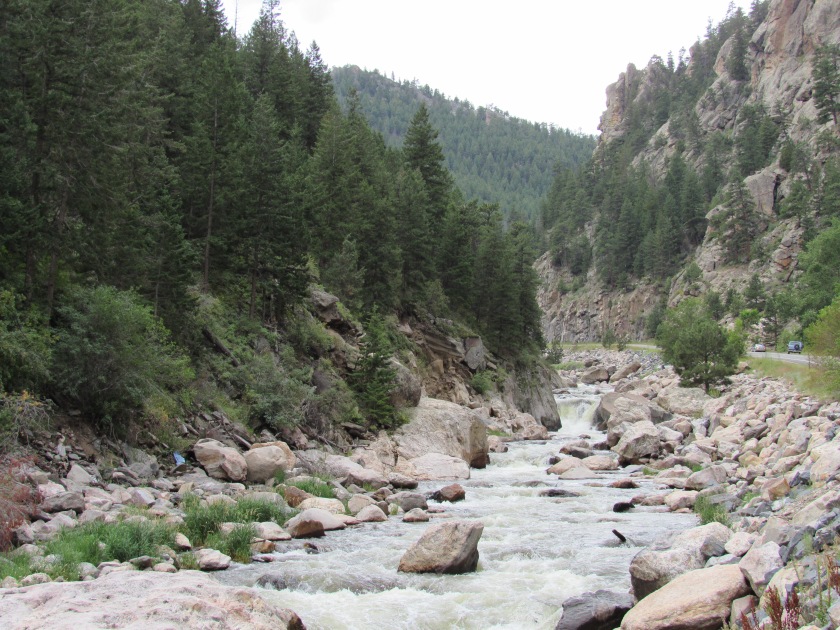 After I took those photos I looked up towards a rock formation and took this shot.

I continued up the road towards the little town of Drake, where I saw this gorgeous property just off the road to the left.  What a spot to live!

Later I saw this young man fly fishing, upstream in the same river.  He lives down in Boulder, which is between here and Denver, and was just up here to enjoy the day. 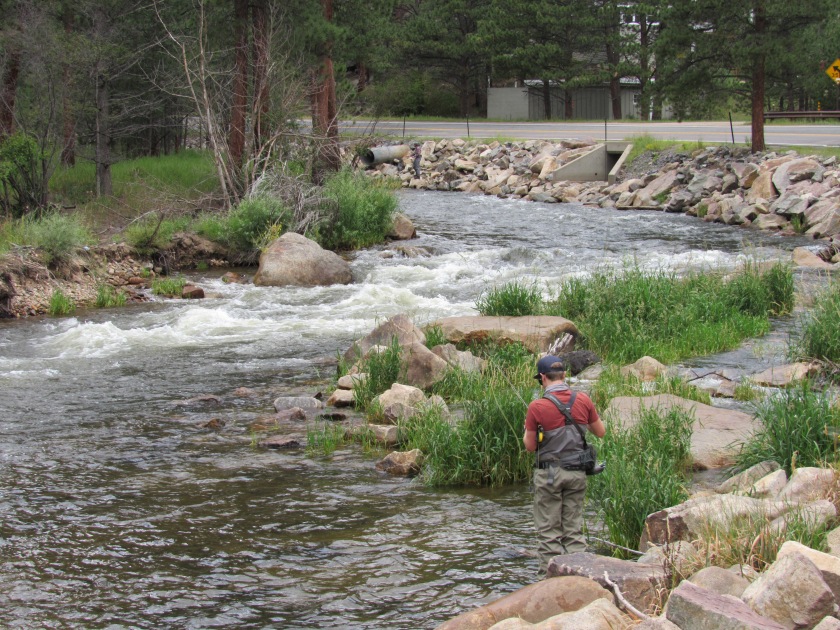 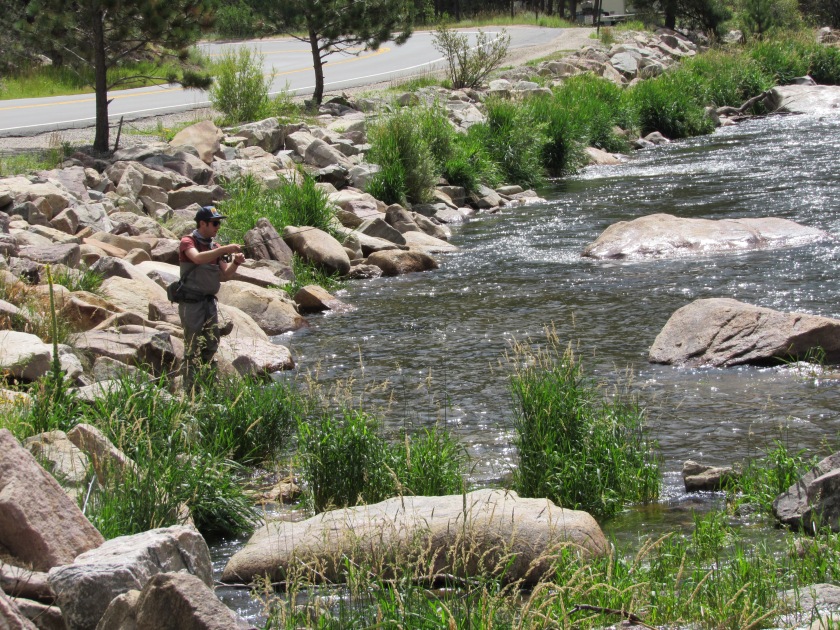 This hotel is located in Estes Park, Colorado, just outside the east entrance of Rocky Mountain National Park.  It was used for most of the exterior shots in the original 1980 film “The Shining,” as the Overlook Hotel. 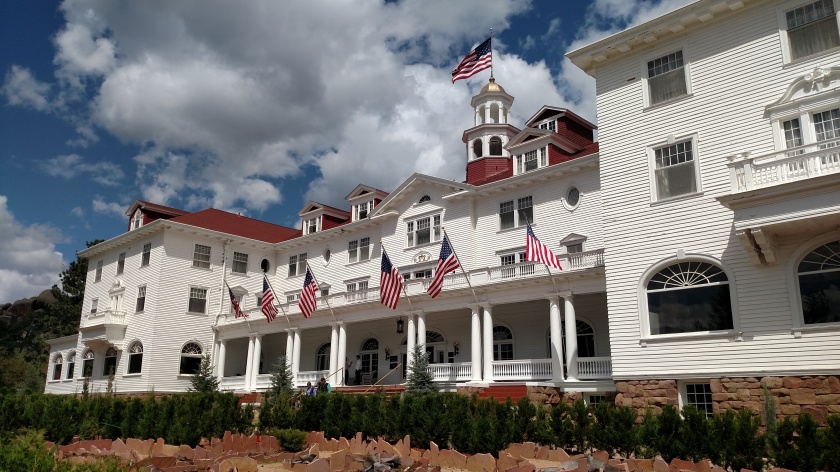 The hotel was built by F.O. Stanley in 1909.  His twin brother, F.E. Stanley, designed the Stanley Steamer automobile (not the carpet cleaning company).  A restored 1910 Steamer sits inside the hotel lobby.  It originally sold for $850 and there were more than 10,000 of them built. 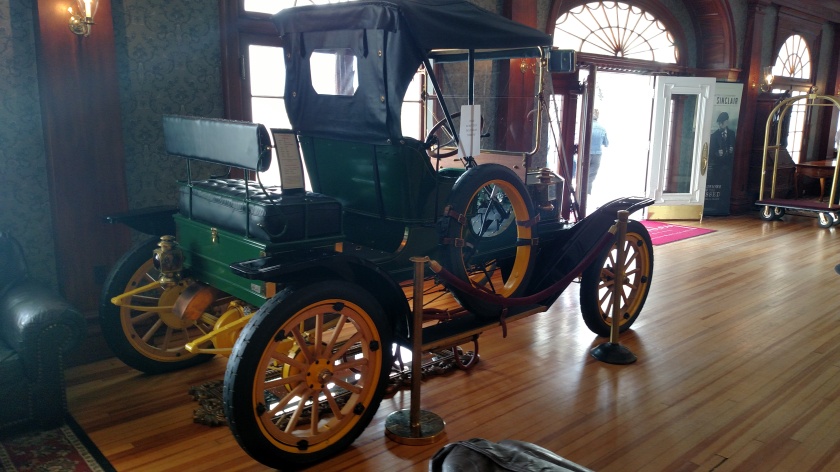 If you haven’t seen the movie (the original with Jack Nicholson and Shelley Duvall, NOT the remake) you really need to.  It is a classic.  I plan to order the full, uncut version when I get home and pay particular attention to the exterior shots (the hotel interior was constructed on a soundstage in England).

A few weeks ago I visited the Timberline Lodge, at the base of Mount Hood, Oregon, which was also used for the opening scenes in the movie.

I was disappointed to learn that the huge hedge maze seen in the movie doesn’t actually exist (they have built a quasi-maze in front of the hotel but it isn’t quite the same).  It, too, was only a model built in England.  Ah, the magic of Hollywood…..

This three-photo sequence was taken by panning left-to-right from the Forest Canyon Overlook.  This was around 2pm local time. 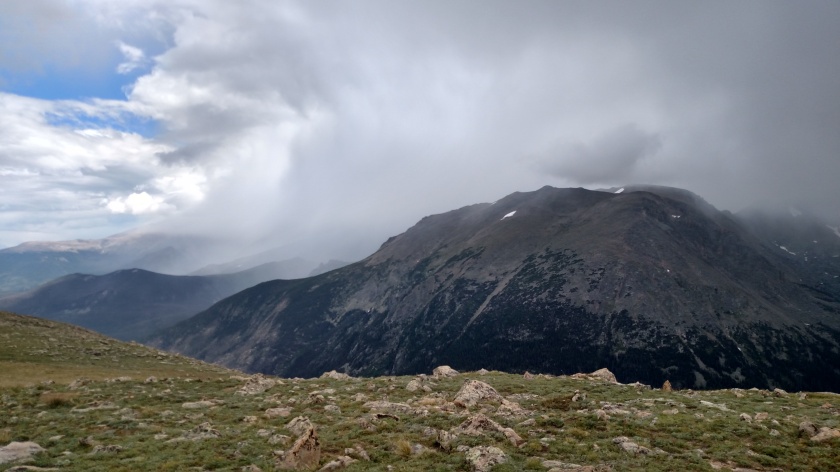 That cloud system was moving in from the west and overtook me before I got to the next stop.

As I was walking briskly back to my car I saw this young man walking up to the overlook with his father.  I complimented him on his being properly attired (I was still wearing shorts and a t-shirt.  Brrrrrr….).  I continued walking but then went back and asked his dad if I could take his picture.

And I saw this young couple from South Dakota again.  We had been seeing each other at various stops ever since I entered the Park around 1230 local time.  They really cracked me up at our first encounter because she was standing on the grass panning her phone from right-to-left and he was standing right behind her, on the sidewalk which was slightly higher, doing exactly the same thing with his phone.  They moved together in perfect harmony and I wish I had been quick enough to have taken a picture of them while they were doing it. 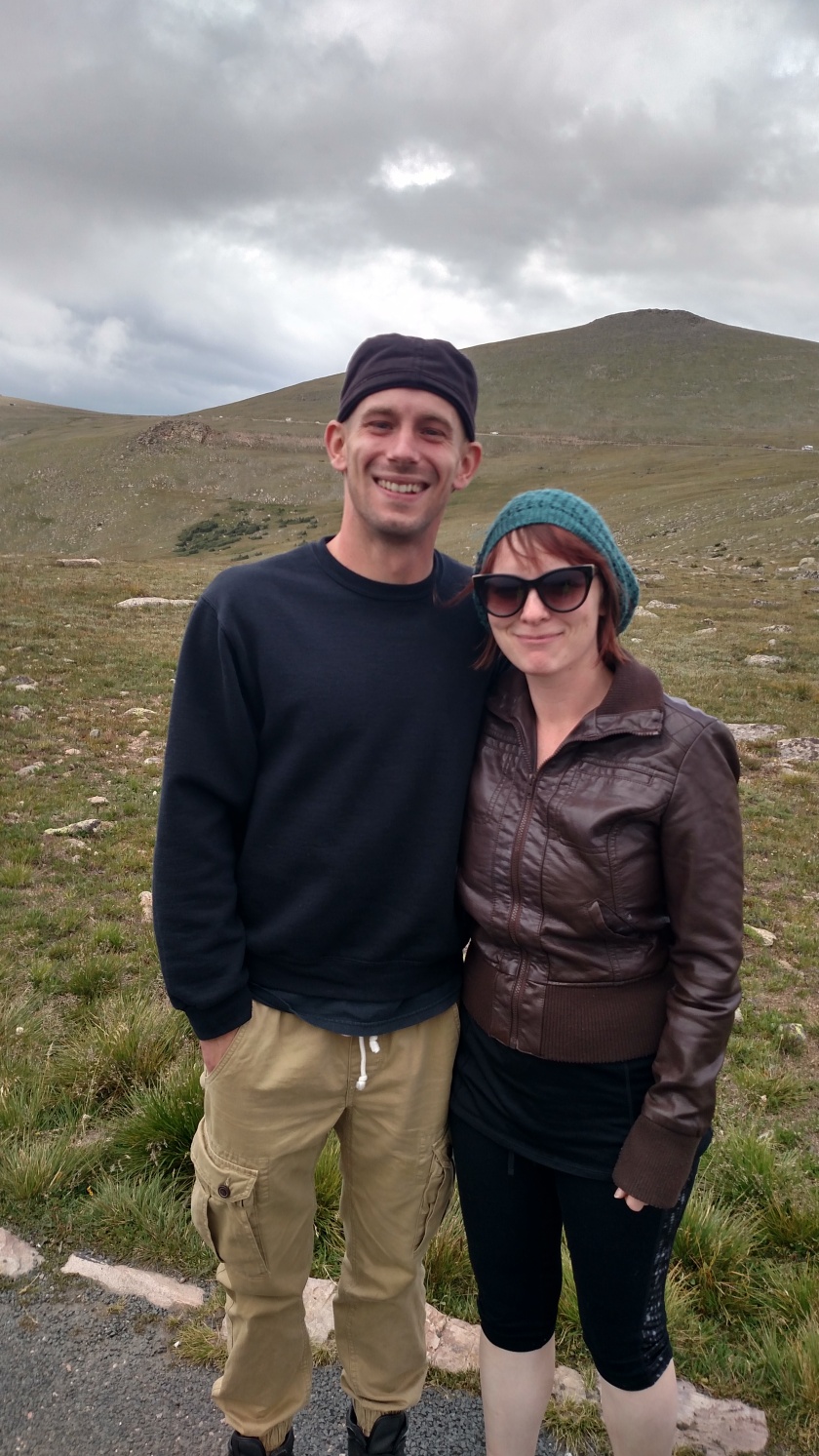 They were also dressed much more intelligently than I was.

When I arrived at Lava Cliffs I was at the highest point on the road through the Park, 12,183 feet.  The temperature had dropped to 39 degrees and it started sleeting.  Yes, SLEETING on August 16 at 217 in the afternoon, local time!

After getting back down to a more comfortable altitude I exited the Park to the west and soon arrived in the little town of Grand Lake, Colorado.  My nephew, Sam, has been working there this summer before heading back to Colorado Springs to start his 4th year of college.  Sam is a Master Electrician and programs all the lighting for various productions being performed at the theater.

Sam and I are going to be having lunch tomorrow but he took a break from what he was doing  today (helping construct props and other stage fixtures) to give me a quick tour.  The production is dark on Sundays but they rotate 3 different shows on the other 6 nights of the week.

This is from the stage looking towards the audience.  The Ryman Auditorium in Nashville wouldn’t let me do this…. 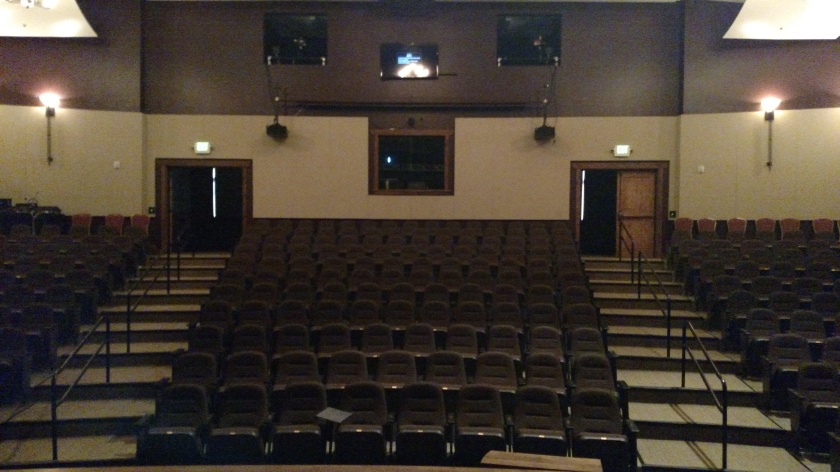 And this is the area behind the audience where Sam programs all the lighting instructions based of the script for each show.  He is actually backstage during each performance but is in communication with an assistant who triggers each pre-programmed lighting sequence on cue from this vantage point.

I’ll be coming up to Grand Lake from Breckenridge in a few days to see one of the shows.

This was the view of an area south of my vantage point getting soaked. 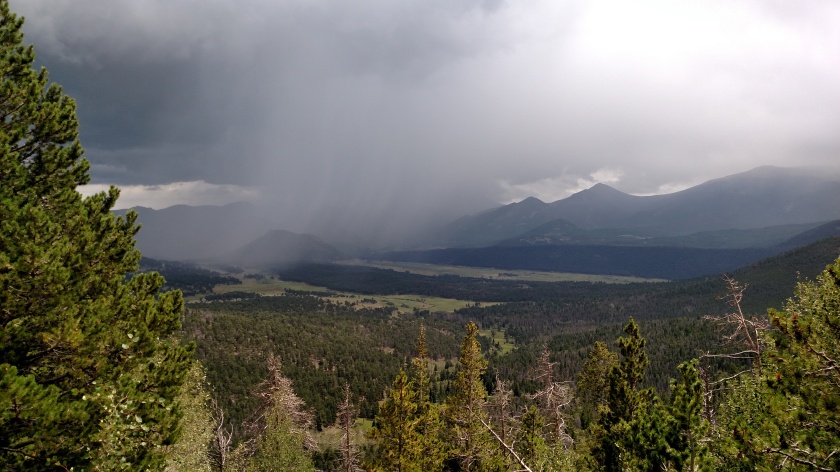 After leaving Grand Lake I saw this young lady and her two horses resting in a wildlife viewing area near Granby.  She had been riding one and escorting the other, which is a rescue horse.

As I drove north on Route 125 I saw this shaft of light to my left.  At first I thought it was rain, but after watching it from various angles and comparing it with other rain shafts I decided it is just light, caused by a hole in the thick clouds through which the sun was shining.

Then I noticed an unusual thing to my right.  I had seen the same phenomena a few days ago in southern Wyoming.  Rainbows are generally arcs of color in rain mist which appear to exist on their own.  This was a colorful cloud, with a much wider color band.  I had never seen anything like it before a few days ago and now here is another one!  I’ll be posting the other one when I get some of my picture backlog caught up. 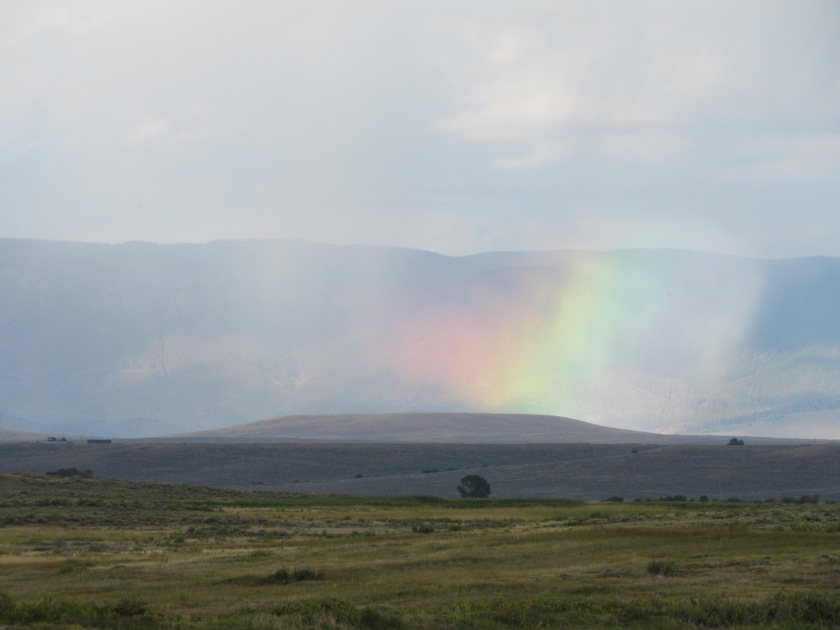 When I got to the little town of Walden and turned right to take Route 14 back to Fort Collins, I noticed this sign which I thought looked really cool.

And as I drove east on Route 14 I noticed a conventional rainbow with a nice mountainous background.

As I was traveling north on Route 125 between Granby and Walden, Colorado I passed this wildlife refuge.  Shortly after driving past the entrance I saw a bald eagle sitting on a fence post to my left.

Then shifted again and took some more