These photos were all taken before 9:10 am, local time, this morning!  I’m showing them in sequence.

First, I drove past this beautiful little lake.

Then I drove further up the road and when I went over a small hill here was the huge mountain staring right at me.

I parked at a pullout area at the bottom of the hill where I then found Lake Marie. 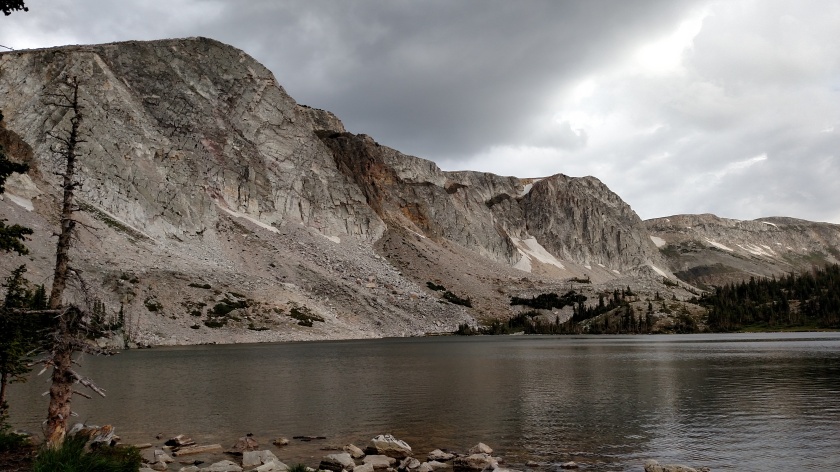 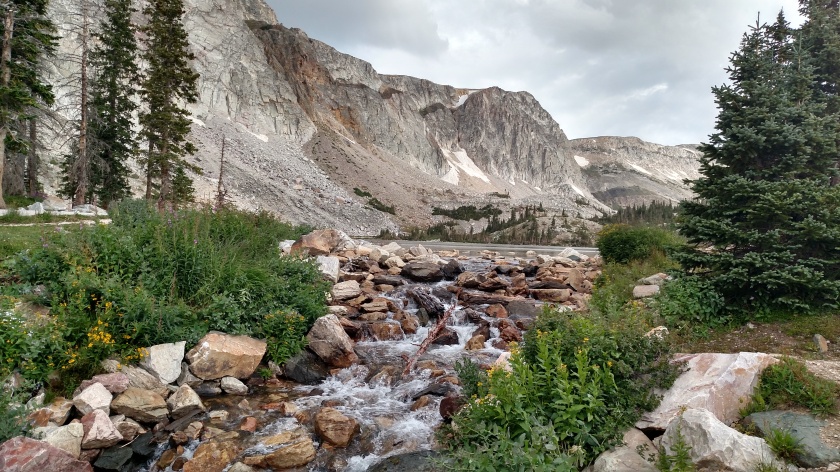 and emerges of the other side of the road…

where it feeds this small pond… 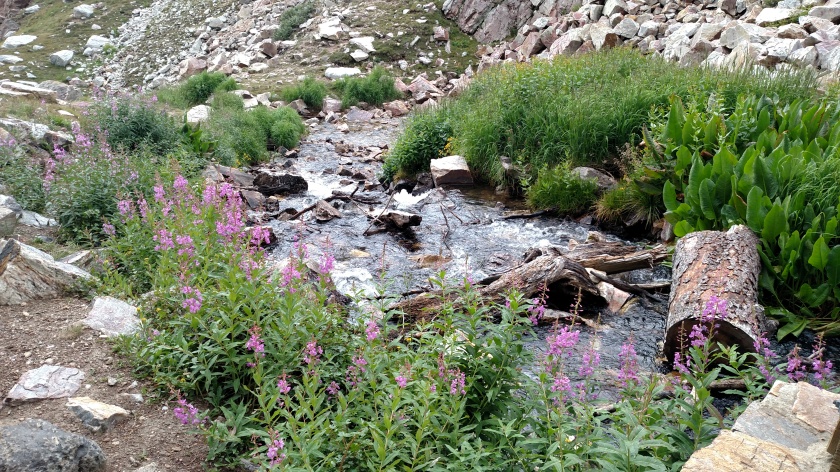 which ultimately drains through this huge rock field.

Oh, and to the right of the bridge in the pond photo were some very colorful granite boulders (bigger than my head, and some days I have a pretty big head!). 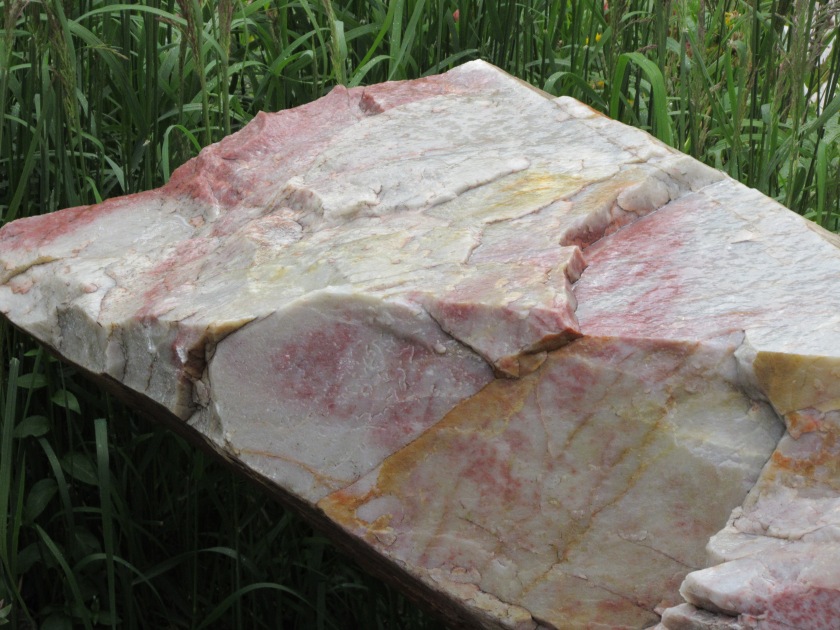 I have more photos of all these things and will post them in the coming days.

I am so sorry for the two day delay is blog posts.  I hope this helps make up for it.

I stayed in Rawlins, Wyoming the night before and got up early to get to the scenic road I was planning to drive so I’d be there early and have a better chance to spot some wildlife. 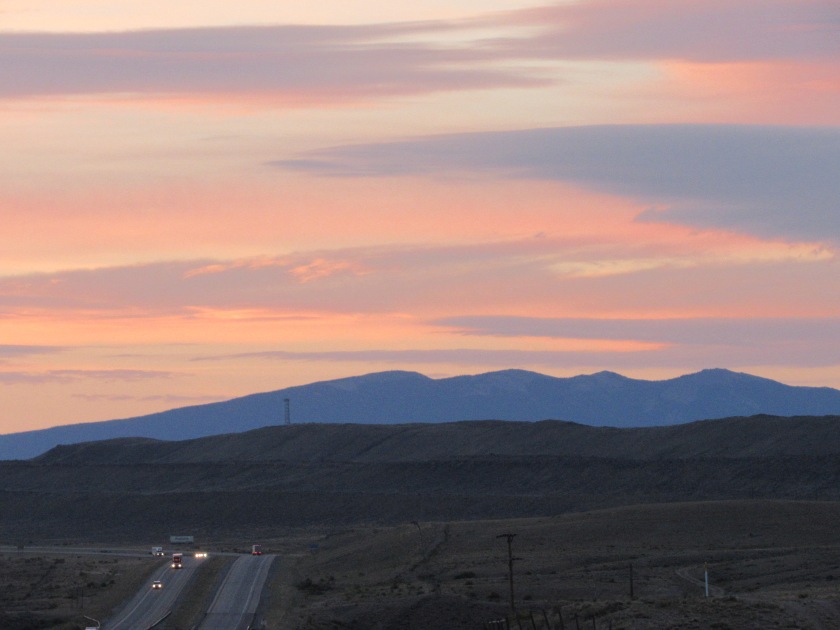 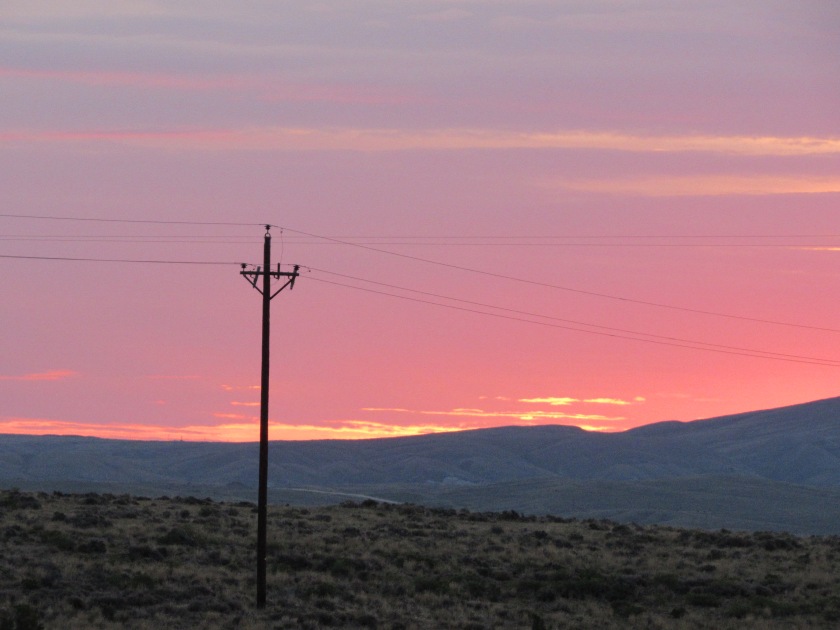 Only about 2 minutes after getting off the interstate there was a pronghorn (antelope) running just a short distance off the right side of the road, parallel to it, at about my pace.  I continued driving a short ways so that by the time he reached me I’d have the camera ready.  Well, when I got in position he turned away from the road and ducked behind a snow fence.

What’s a snow fence?  I’ve seen these lots of places during this trip and was saving them for the right time.  These are constructed a few hundred yards off roadways to try and force blowing snow to drift on them and NOT the roadway.  I see them everywhere. 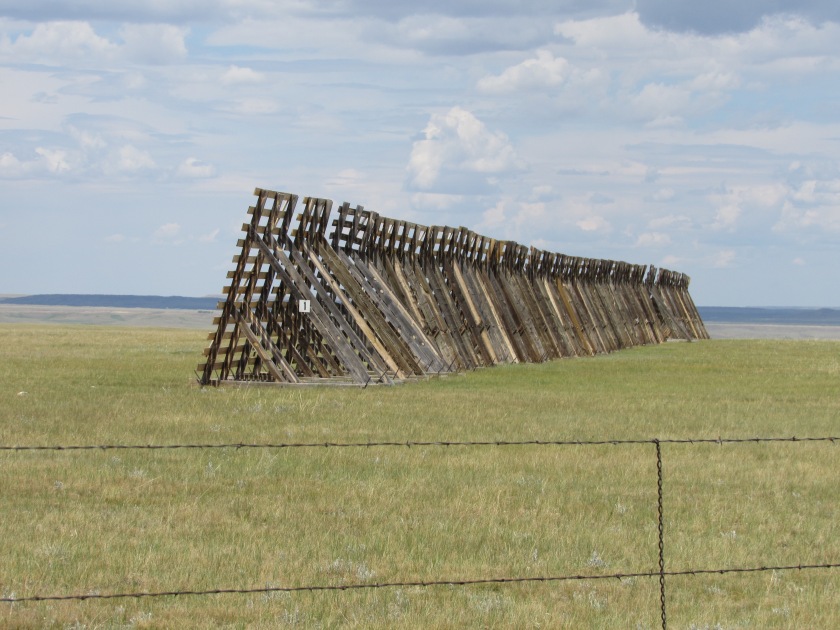 And to give you some idea as to how big they are, here are two photos with pronghorn standing not far in front of them (from my vantage point).

When I got further down the scenic road I found some more pronghorn. 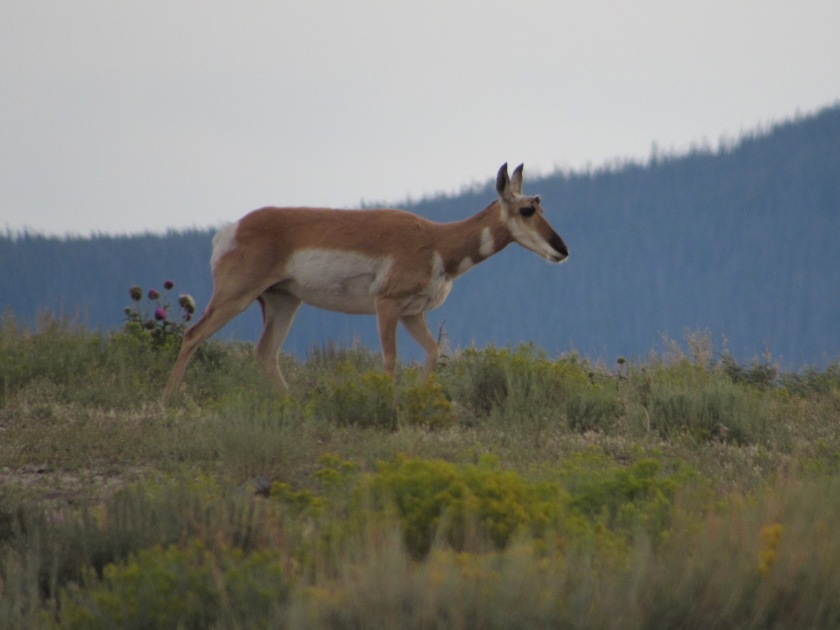 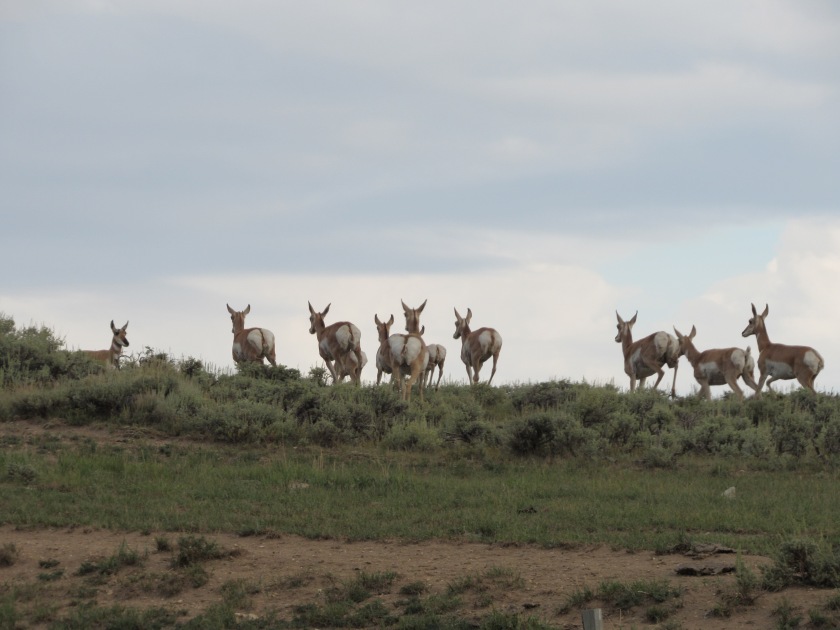 There was this observation tower at a high point on the road I was on (Route 130) and I spent a good portion of the late morning there.  It not only afforded a great 360 panorama of the area but also gave me the chance to finally get some marmot photos! 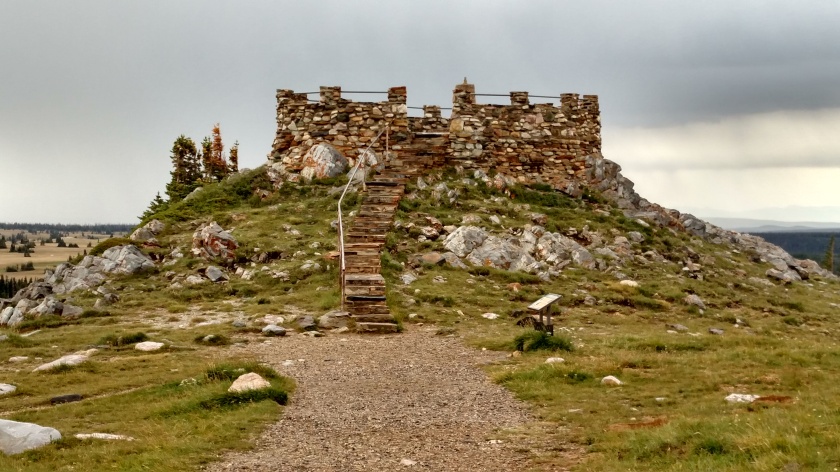 A marmot is a large squirrel.  It looks like a small groundhog.  It’s nickname is rockchuck (like woodchuck, but with rock) because they like to live in rock clusters.  I saw one the day before while I was still in Idaho but got better pictures of this one.  The one I saw in Idaho was a yellow-bellied marmot, thank you very much.  It was more slender and a darker brown than this garden variety marmot.

When I arrived at the tower there wasn’t anyone there.  When I went up the steps to the viewing area and walked to the south edge, there was a marmot, not 10 feet away.  Well, he scurried into hiding before I could get my camera ready.  I then walked to the west edge and damned if there wasn’t another one 10 feet away and he scampered off too.  These photos were taken (with zoom) after they re-emerged down the hill and were scouting for food (or keeping watch for predators).

People kept coming and going so they never came back out up high.  There was another animal I was hoping to finally get a photo of while at this spot but it remains elusive. 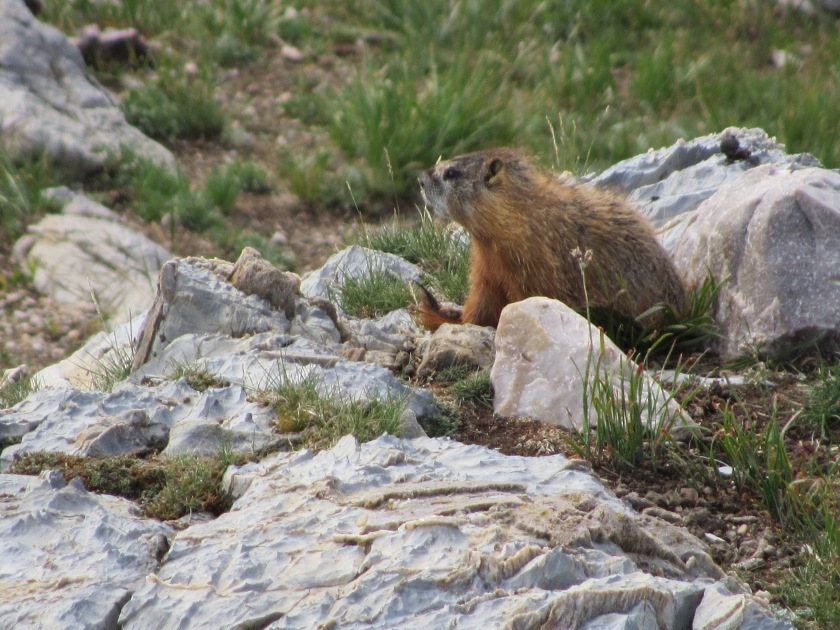 East of Laramie, Wyoming I found this National Recreation Area located just off Interstate 80.  It consists of many large (and I mean large) clusters of huge boulders.  Hard to believe these formations were created naturally.  Part of it is now a campground and roads and paths weave through the various groups of rocks.  It had started to rain so I positioned the car so I could take these out the driver’s side window and not get my new camera (or my Safety Sam vest) wet.

Note the big camping trailer at the bottom of the last photo.  I have lots more pictures of these formations but only posted the best ones.

Here are some random photos taken throughout the day

As I was waiting for critters show up while loitering in the Observation tower I heard a jet flying high overhead:

After leaving the scenic area I had spent most of the morning in I drove east to Laramie, Wyoming, where I was supposed to stay last night before deciding to get a motel room in Rawlins.  I stopped to apologize in person to the woman in whose home I was supposed to stay.  I then visited a few places in the Laramie area.

University of Wyoming/Laramie (Go Cowboys!!).  Their campus has the most beautiful sandstone buildings:

East of town there is a tall statue featuring a bust of Abraham Lincoln peering down at the interstate highway.  He doesn’t look very happy.  His head is HUGE (visualize it compared to people who could be standing on the steps at the bottom of the photo).  This statue is at 8,640 feet of elevation near Sherman Hill, the highest point the transcontinental railroad route reached (see next photo).

Next, further west to the Ames Monument, a tribute to two men, Oliver and Oakes Ames, who were promoters of the transcontinental railroad.  It is 60 feet tall and was constructed in 1881-82.  It marks a point called Sherman, a train inspection station,  before the railroad tracks were moved by Union Pacific railroad. 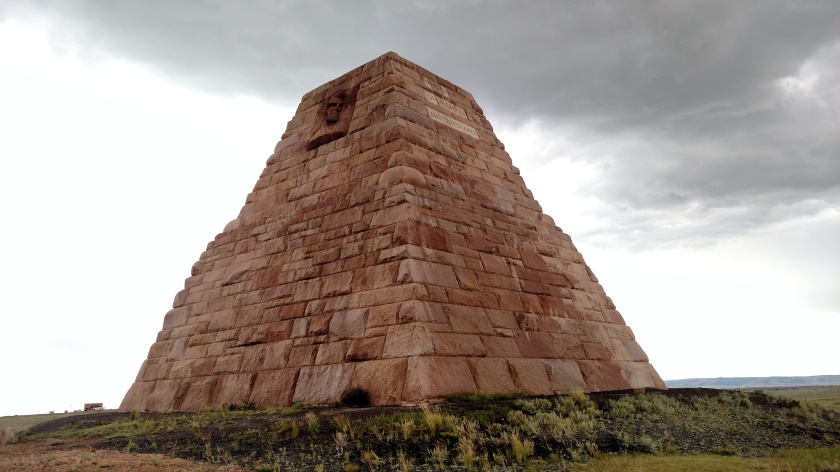 Finally, as another brief rainstorm moved in to the area, I drove down to Fort Collins, Colorado, where I will be staying the next 4 nights.  As I got into town the rain had stopped and there was a double rainbow.  The right part of the inner arch was incredibly bright, perhaps the brightest I have ever seen.  As I waited to turn left and proceed into downtown Ft. Collins I noticed that I could see the entire lower arch.  I was hoping my Airbnb host, Eric, lived at one of the two ends but he does not. 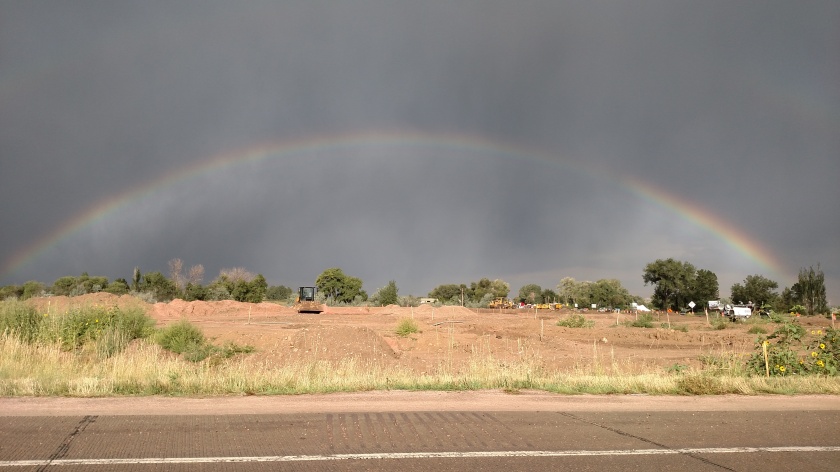 I had an awesome meal at a Mexican restaurant Eric recommended and was off to bed so I could get up at midnight local time and resume blogging!  The end of another totally awesome day!!

I will be posting more photos and information about the scenic area I was in in the coming days.

Tomorrow I’ll start exploring Rocky Mountain National Park here in Colorado.  But I still need to go back two days and wrap up some loose ends from Hell’s Canyon and other parts of southern Idaho.  Those posts will start tomorrow evening.