First off, I want to say a big THANK YOU to Andrew at the Verizon Wireless store in Divide, Colorado.  Andrew helped me figure out how to recover the hundreds of photos I had taken which wouldn’t transfer to my computer from my phone.

I want everyone to stop what they’re doing and say out loud, “Thank you Andrew”

I thoroughly enjoyed a lengthy (2 1/2 hour) private tour of this base’s museum.  The base is located just east of Colorado Springs, near the airport.  It used to be a municipal airport serving both military and civilian aircraft.  It is named for an Air Force pilot whose plane crashed here shortly after takeoff.

There was a short video in the museum (which was the original passenger terminal) and explanations of much of the memorabilia housed in it.  There is also a hangar which has many displays of aircraft, spacecraft and an overview of Cheyenne Mountain Complex operations and missile defense systems.  Outdoors were numerous aircraft and missile displays.

This is a Lockheed EC-121T “Warning Star”.  It is a radar reconnaissance aircraft which was manned by two crews, one on duty, one resting, in order to stay in the air longer.  It still contains almost all of it’s original equipment.  The Warning Star was the predecessor to current AWAC’s aircraft.

President Eisenhower had three airplanes which were variations of this platform at his disposal for official air travel.  They each had their own designation but after an incident with an Eastern Airlines plane in 1953 (a near-miss caused by call-sign confusion) the official “Air Force One” designation was created.  Any fixed-wing aircraft the President of the United States is on (even a private prop plane) is called Air Force One.  Helicopters are called Marine One. 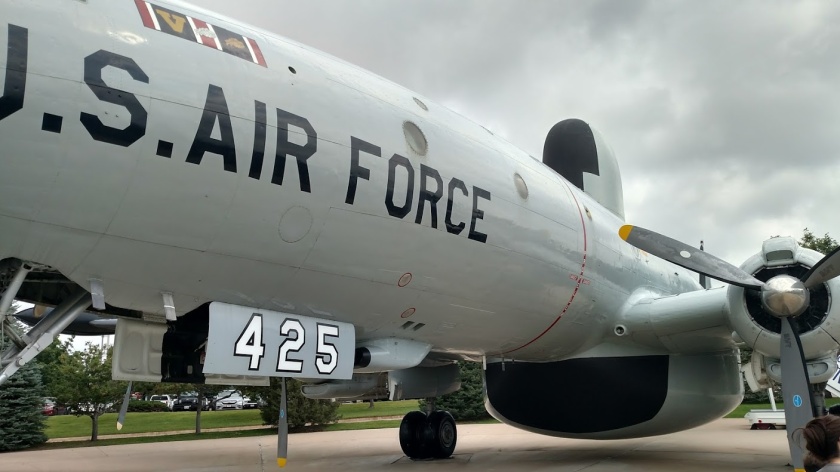 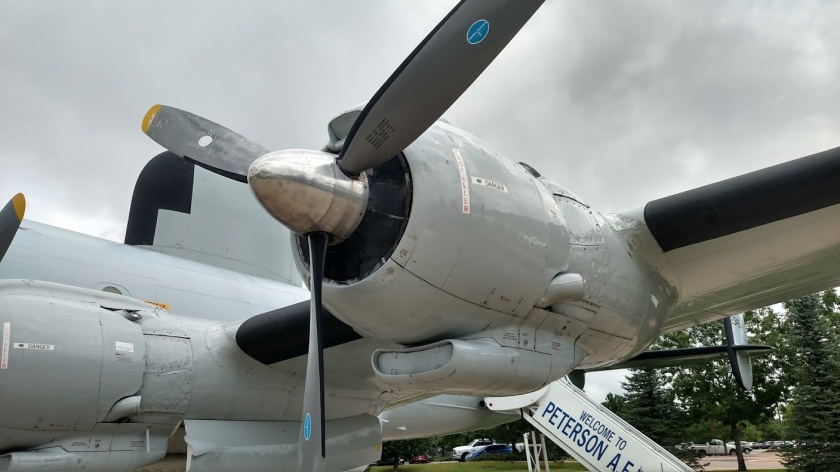 One of 4 identical radar stations.

This is a private residence which used to belong to the caretaker for the old municipal airport.  It has been renovated and is currently used to house VIV’s (Very Important Visitors).  Maybe if I hadn’t already had my Airbnb booked I could have stayed here….

That’s what your GPS unit enters into it’s GPS unit when it wants to go home.  This is where GPS lives.

Schriever AFB is where the 50th Space Wing, formerly known as the Consolidated Space Operations Center, is located.  It is the nerve center of the worldwide Global Positioning Satellite (GPS) network.  Here they monitor 31 satellites in orbit all around the Earth.  As my guide, Jim, at the nearby Peterson AFB museum put it, Schreiver (pronounced Sh-REE-ver) is the only Air Force Base without a runway.  He told me GPS technology has advanced to the point where it is accurate to within 24 centimeters.

Jim said that this was another facility I shouldn’t even try to photograph.  I had heard about this base on an NPR “Science Friday” episode about a year ago. In it they said that because of the worldwide reliance on GPS, guards here also have standing shoot-to-kill orders against intruders.

Here are some photos I found from the relative safety of the internet. 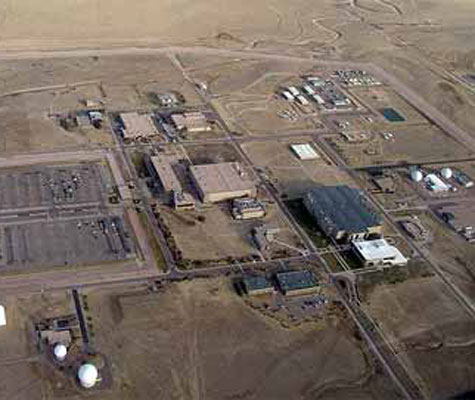 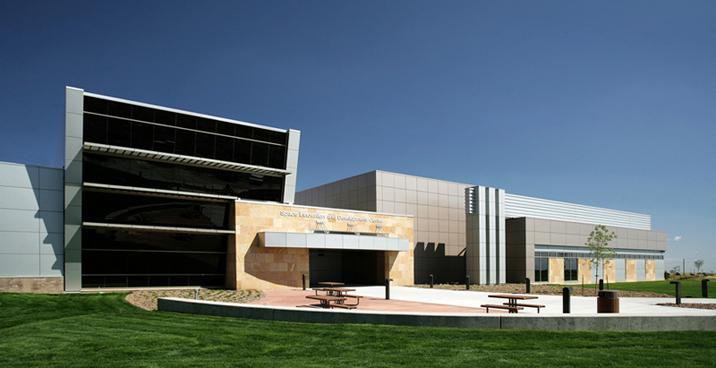 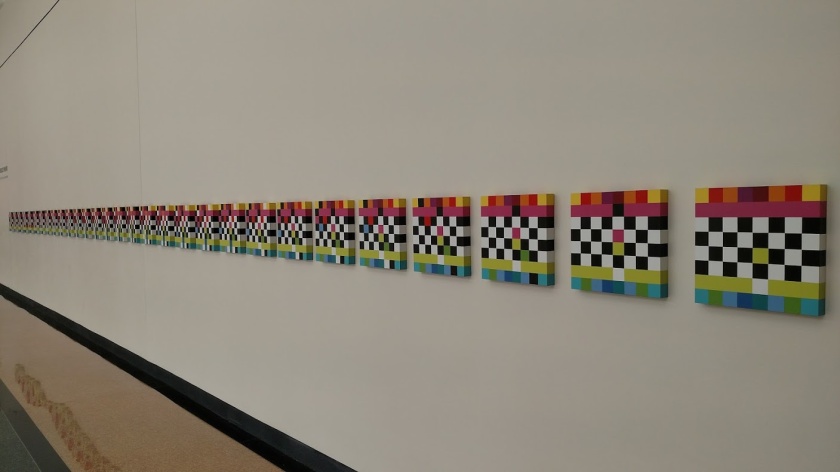 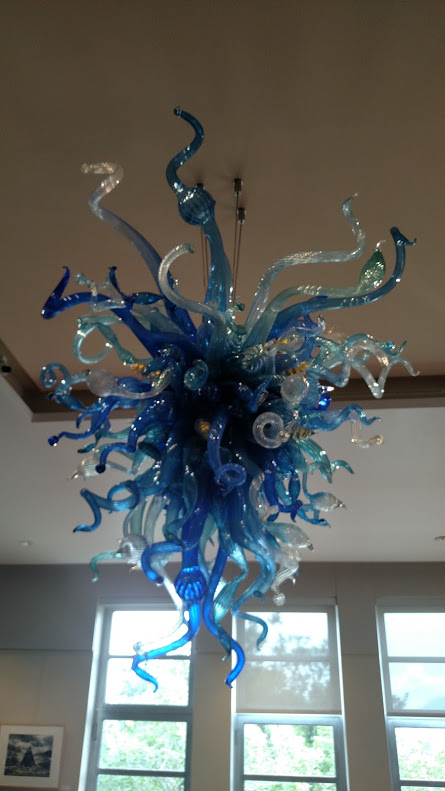 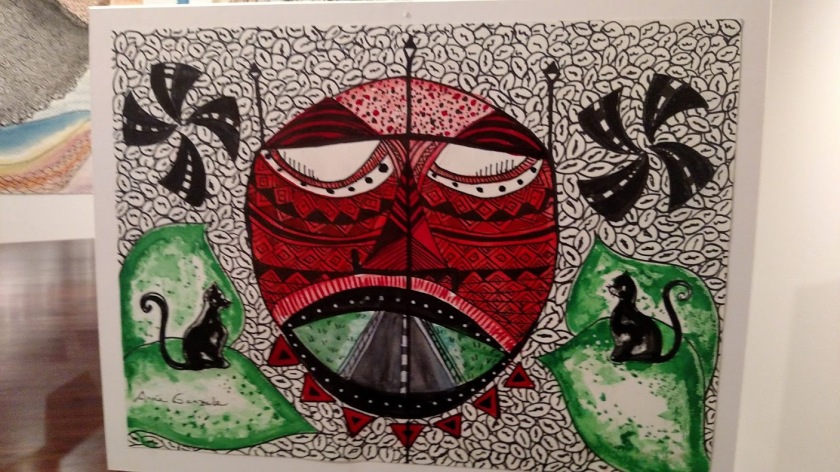 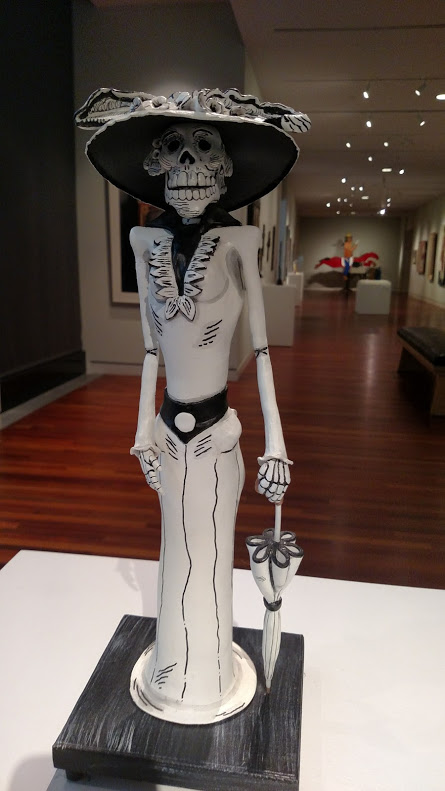 This was one of my favorites.  It was done by a local artist.  I examined it closely for quite a while.  As my friend Shawn once said when describing an architectural design in Indiana, simple yet elegant.

There were some folks constructing a new exhibit in an open courtyard.  It will consist of bicycle wheels suspended above the ground with plastic scoops attached to make them rock in the wind.  Hanging below will be fiberoptic strands illuminated by an led light. 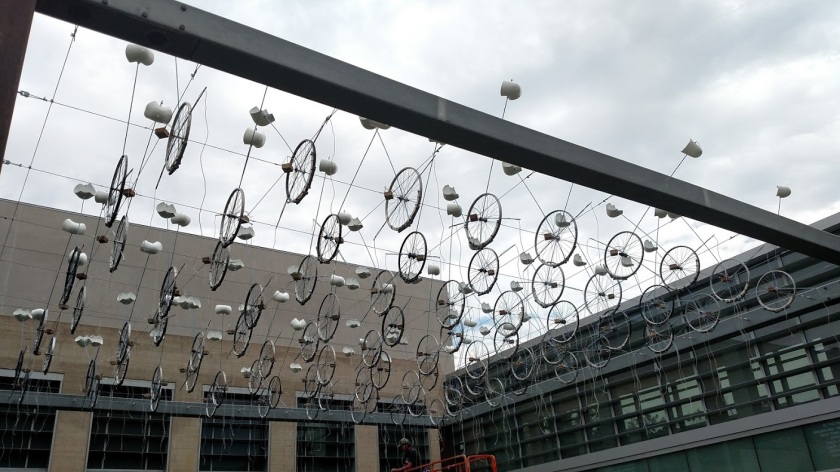 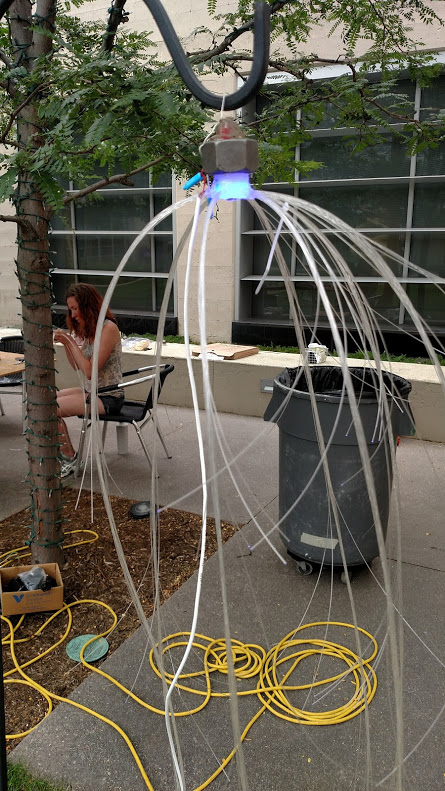 There was a gentleman standing on the sidewalk talking to the guy up on the scissor-lift.  I half jokingly asked him if he was the artist and he said “Yes, I am”.  His name is Buck Walsky.

No trip to Colorado Springs would be complete without driving up to the top of nearby Pikes Peak, a world renowned road course which has hosted rallies and hill climbs (and descents) for various types of vehicles.

ARE WE THERE YET??

This was taken from “only” 12,973 feet.  I’m afraid of heights and had already started driving on the wrong side of the road at times in order to stay away from the edge.  There are guard rails only at some of the sharp turns, not along other parts of the road.  It takes a very brave person to drive this road at high speed (and it used to be a dirt road!!).

With frequent breaks, and deep breathing, I finally made it to the top. 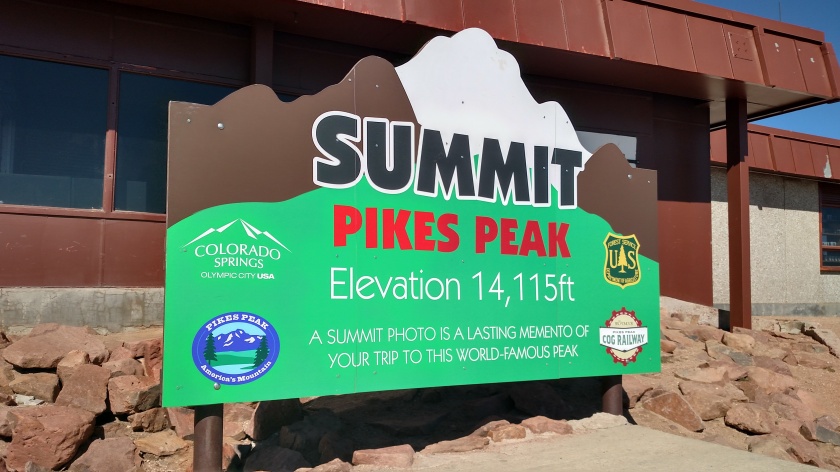 When I parked my car my GPS said I was actually at 14,192 feet.  The views, as you would expect, were spectacular.

At one of my photo op stops on the way up the mountain another vehicle also stopped to take pictures and I offered to take a family photo for them.  That is how I met Brooks. 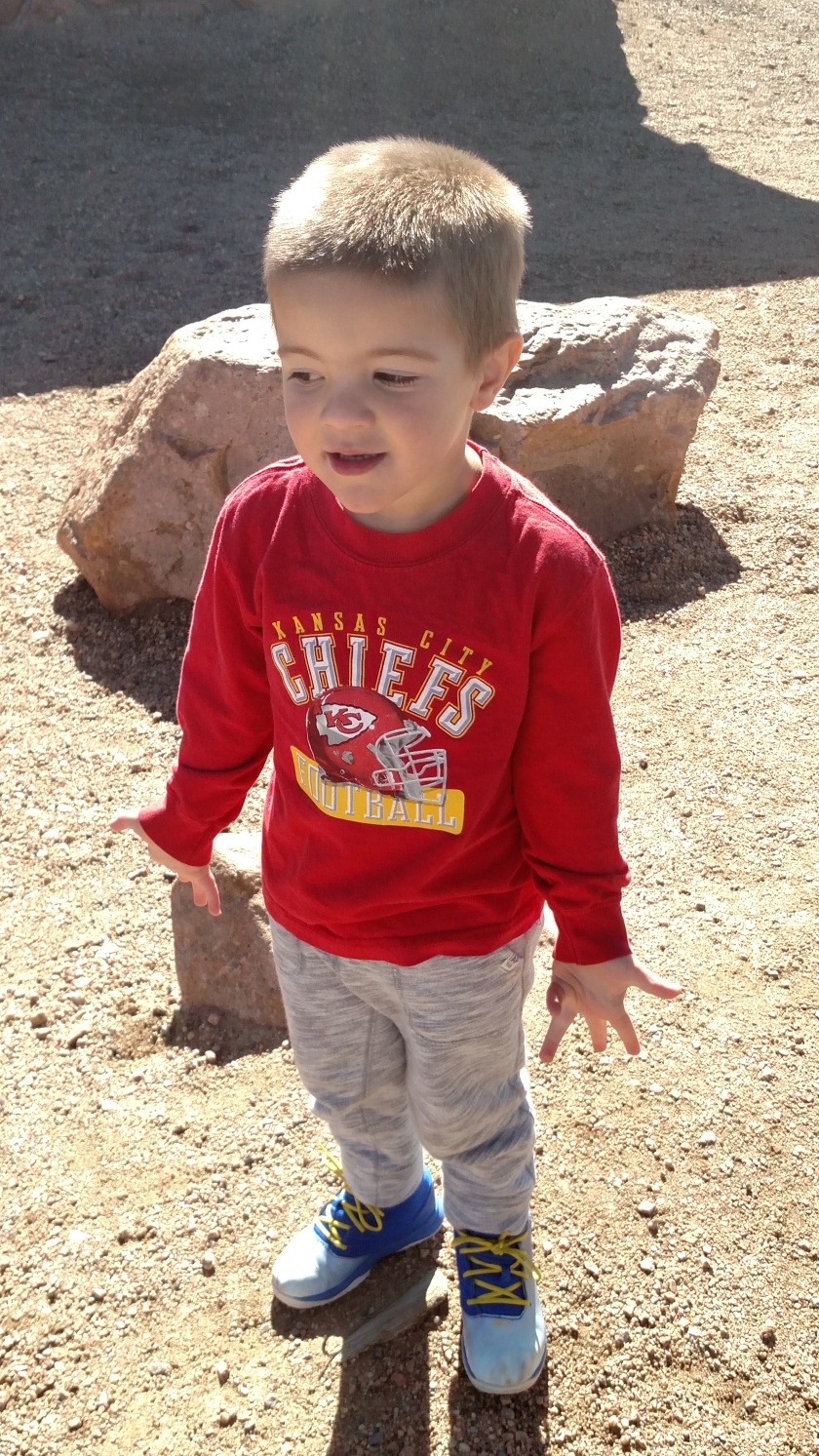 He’s the world’s biggest Tom Brady fan (well, after my sister-in-law Kendra…).  He’s wearing a Kansas City Chiefs sweatshirt because they live in KC.  Brooks loves to play golf.  When we got on that subject he wanted to play RIGHT NOW.  I told him I thought it would be tough to maintain the greens at 14,000 feet.

Here’s Brooks with his Mom and Dad talking to a motorcycle rider from northern Virginia.  I also had an interesting conversation with him regarding the reflective tape he has on his bike, helmet and jumpsuit, as well as the difficulty I was having offloading pictures from my cell phone.  He is on an even bigger road trip than I am.

There was some added excitement on the mountain today as there was a crew filming footage to be used as part of the Gran Turismo video game.  They told me at the entrance that portions of the road might be closed for short periods as they were filming (that’s what it means when you see “Professional Driver on a Closed Course” in fine print in commercials.  They are also quick to add “Do Not Attempt”).

At one point I drove by the parked vehicle which was covered by a large blue tarp. 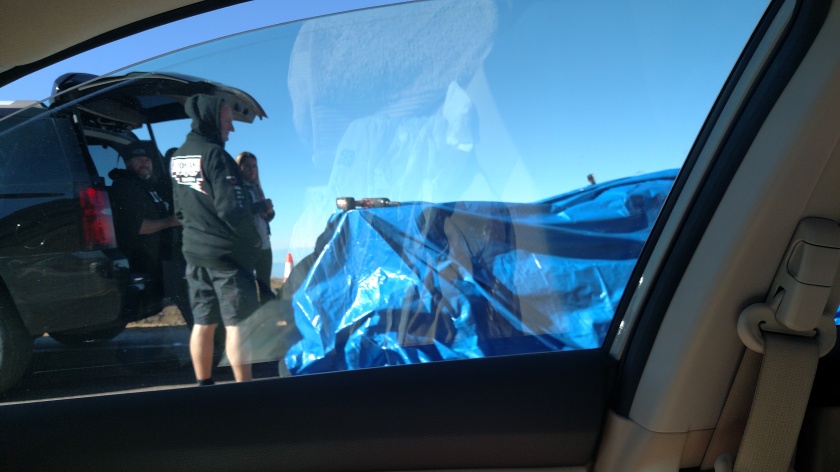 SPOILER ALERT:  I saw the car briefly later in the morning.  It was a low, wide, souped up silver Mustang with the number 43 on the doors.  Sorry, guys.

Before getting to the video shoot I passed some emergency and rescue vehicles (fire, ambulance, etc) which were stationed at various places.

At one point I had to weave past three big snowplows which were staggered on the roadway.  I couldn’t get my camera on in time to document that, but here they were parked off the road on my way down.

There was also a really cool tricked out flat-black Porsche with a huge camera boom mounted on it.

Check out their website at Chase Car Inc.  You can rent it for parties starting at $ 6,515 per day.

And there was evidence of the Mustang’s performance at various places on the road.

Finally, on the way down the mountain was a mandatory brake check at the Glen Cove Inn, located at 11,450 feet.  The young lady there had a heat sensor gun and said my brakes measured 496 degrees.  The target number is 300 degrees so she suggested I park near the Inn and cool my heels (and my brakes) for about a half hour before proceeding.

Fear of heights notwithstanding, it was a great way to spend the morning.

This facility is in the little town of Divide, Colorado, about 40 minutes west of Colorado Springs.  It is a non-profit sanctuary for wolves and other forms of wildlife.

I arrived in the early afternoon and just missed a tour.  It would have been a long wait to do the next one and I had other places to visit so I didn’t stick around.  Since it was mid-day the animals were pretty lethargic (although they perk up for feedings during the tours) and I didn’t see any in the few minutes I was there.  I am planning to come back to this area in a few weeks to do the things I didn’t get to this week and will come back in time to see the animals.

The only areas non-military personnel can access without special permission (or to attend sporting events) are the Barry Goldwater Visitor Center, which contains many photos and displays addressing life, training and discipline as a cadet, and the iconic Chapel. 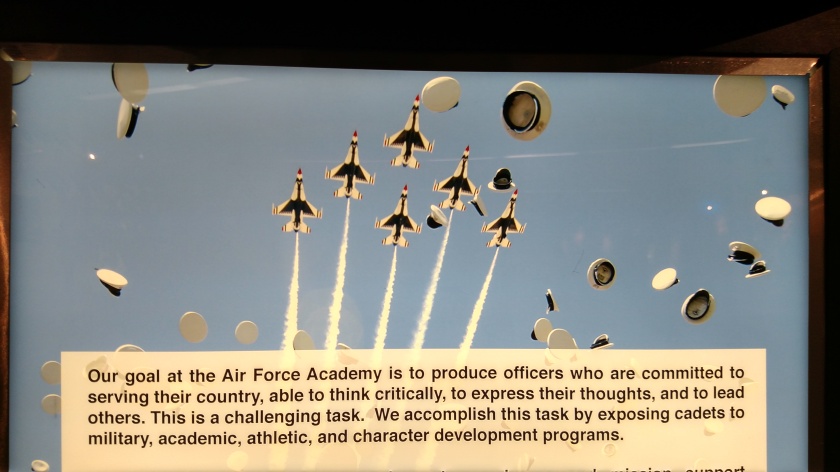 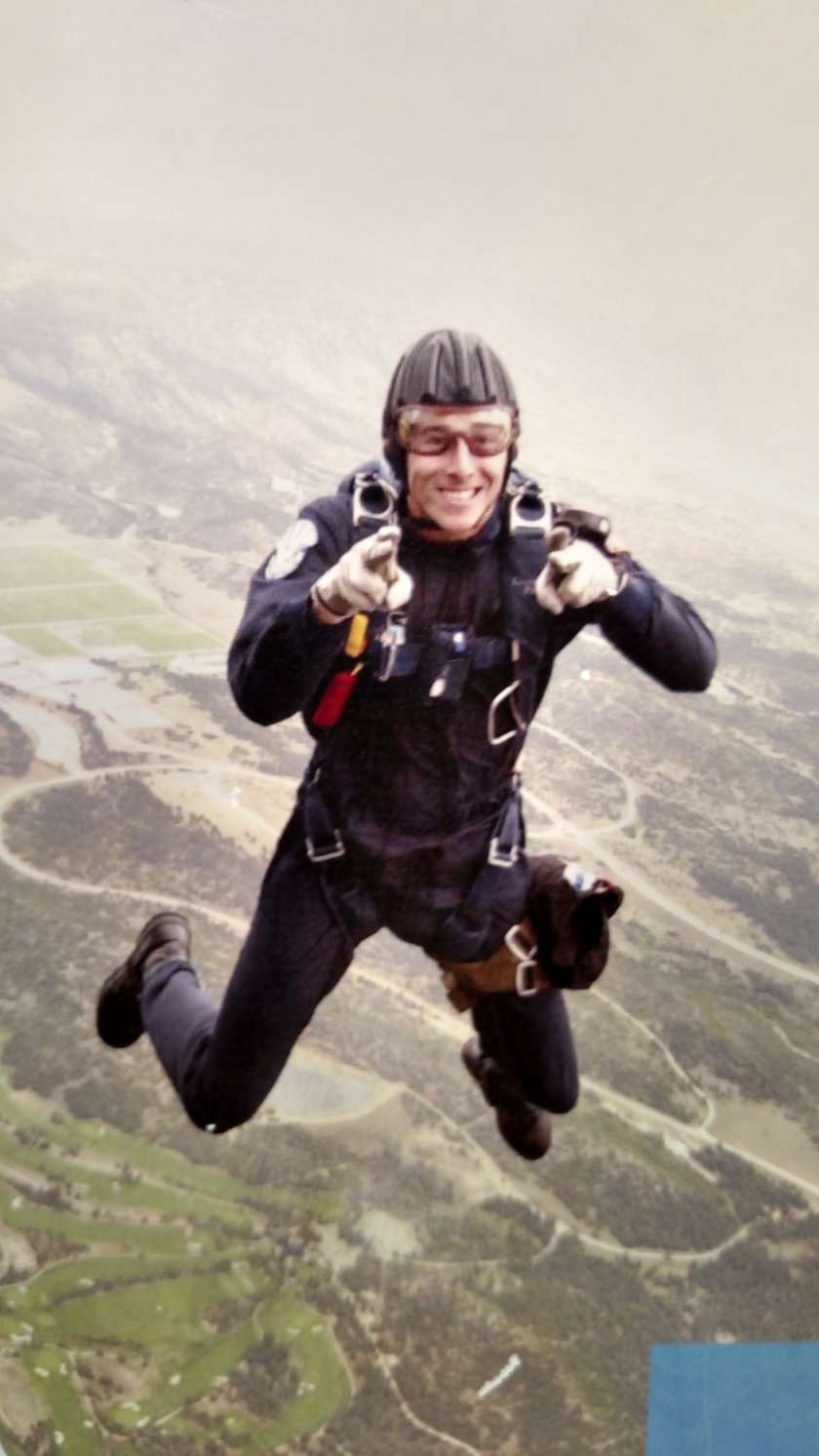 The Air Force is the only military branch to prominently utilize sabres as part of their ceremonies. 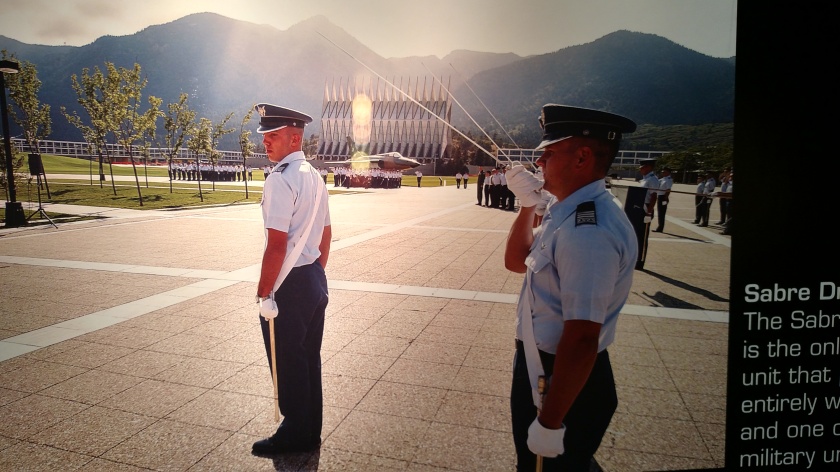 The Air Force mascot is the falcon, and falconry plays a part in a cadet’s training. 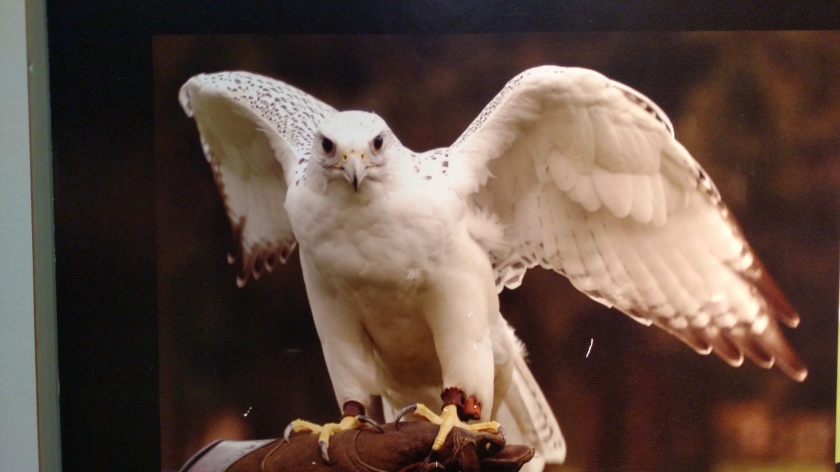 From the visitor center it is only a short walk to the Chapel, which hosts services for all denominations.

And the cross over the altar is actually a huge sabre. 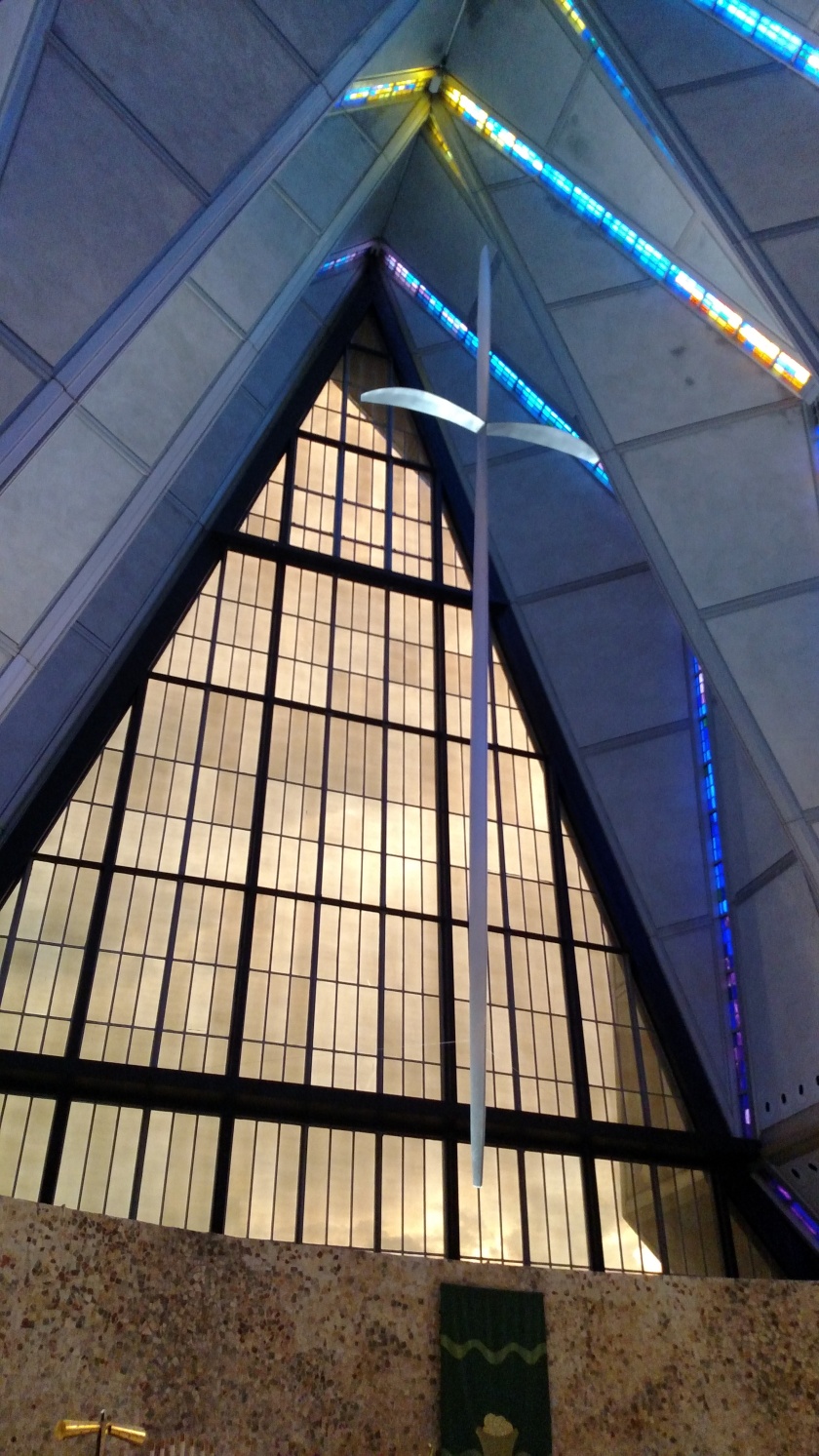 I figured this was a logical place for a guy with a license plate that reads YEEEHAAA to go.

Upon arrival at the HOF the first thing you see is a larger than life statue dedicated to nine-time world rodeo champion Casey Tibbs.

Inside are rooms which contain all sorts of memorabilia of all things rodeo.  Belt buckles, chaps, boots, cowboy hats, saddles, women rodeo riders, trophies, etc.  Everything you’d expect of a Hall of Fame.  Even rodeos themselves, the entire performance, are inducted. 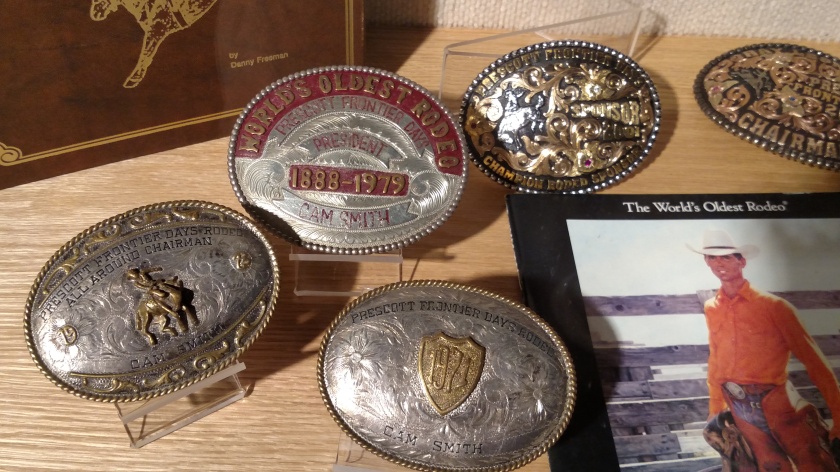 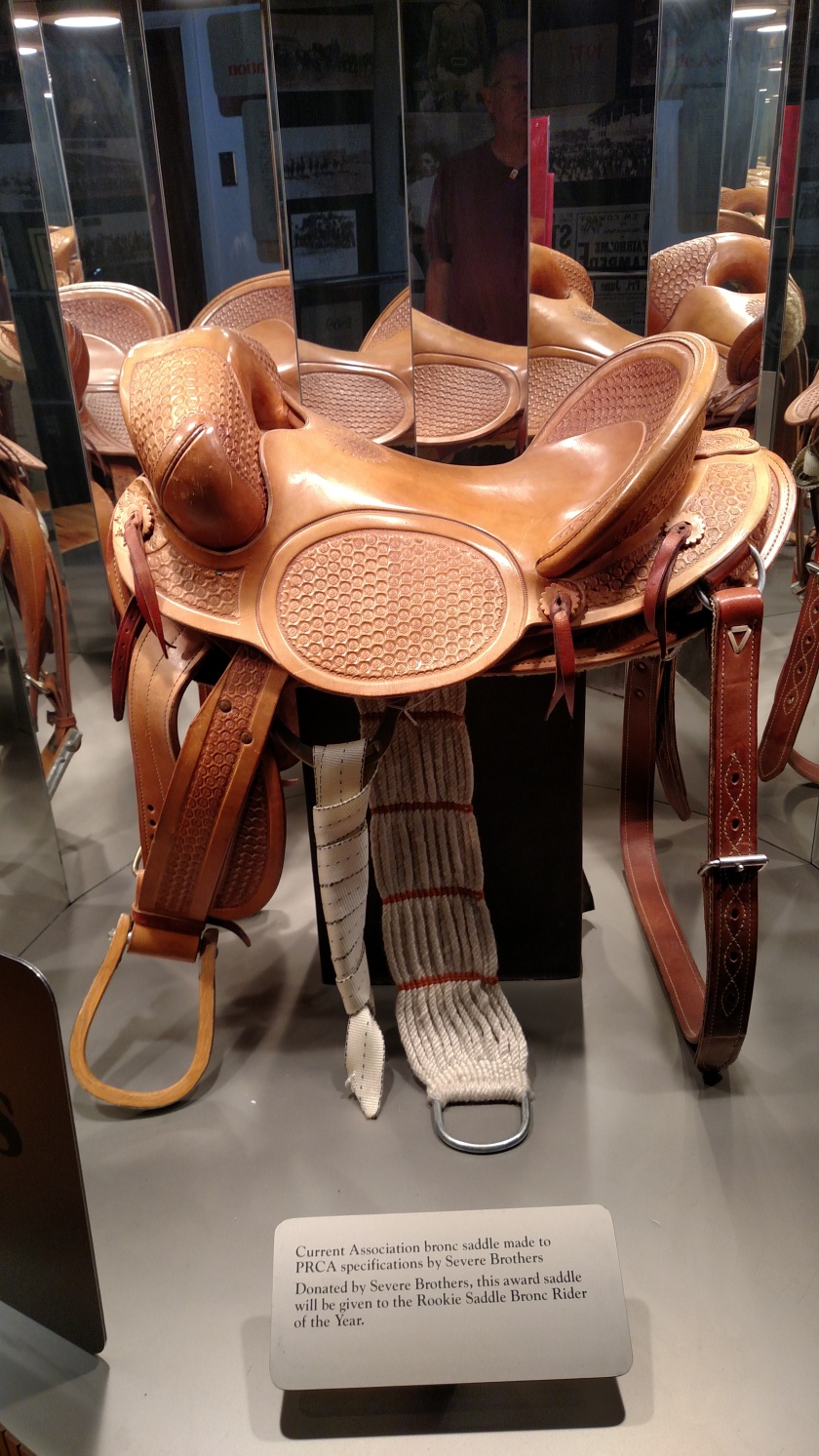 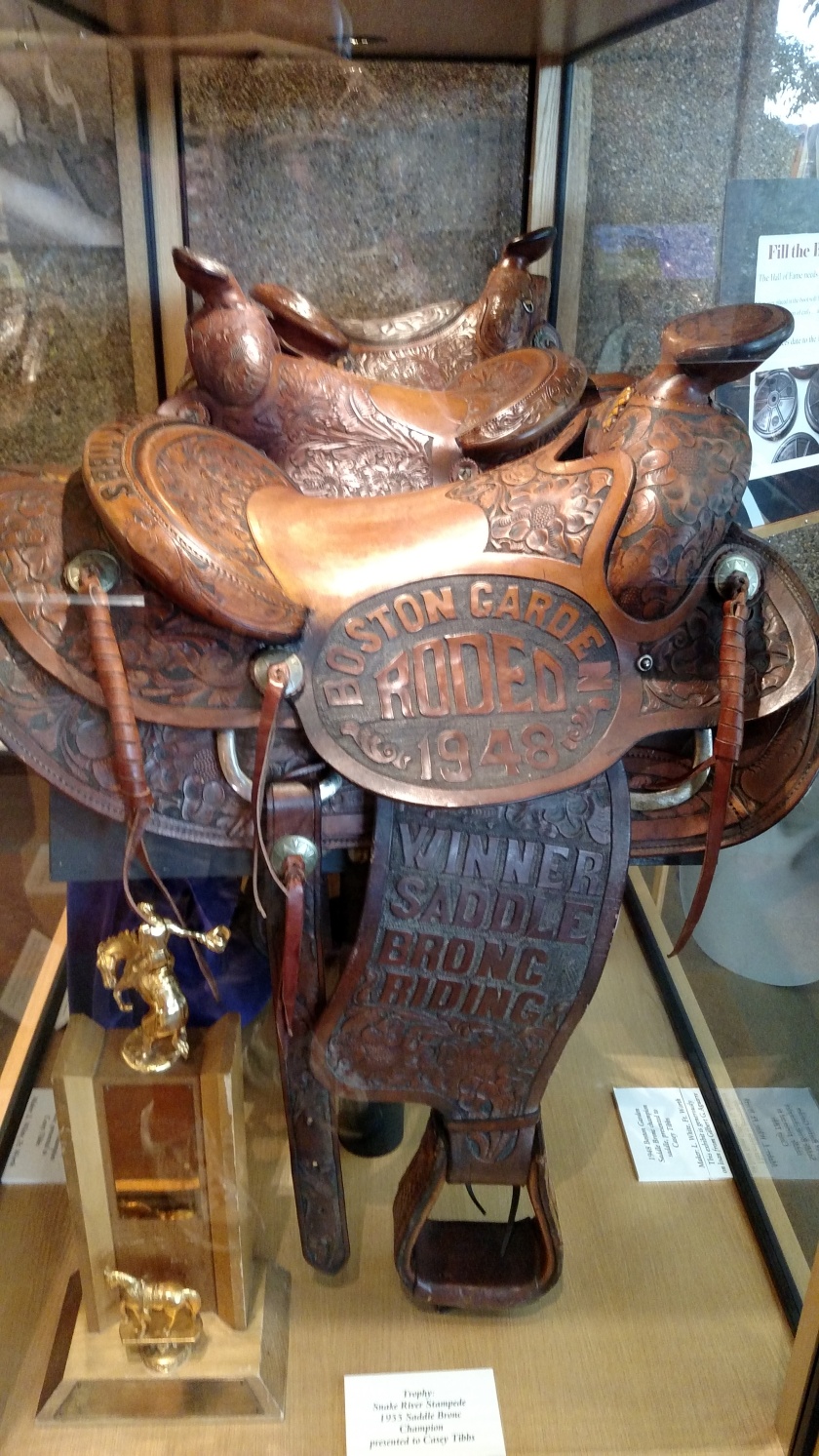