I drove down to Colorado Springs from Breckenridge on Sunday morning.  My nephew, Sam, attends Colorado College here.  My brother Stephen and his wife Jen had flown out Saturday morning to help Sam get his apartment set up for his senior year and buy stuff for him (dishes & kitchen supplies, a bed, some used furniture, etc).  I met them on campus around 1015am.  Sam arrived from upstate soon after that.  I spent the bulk of the day with them, tagging along while they shopped, helping carry stuff upstairs from the car to his second floor apartment, and had lunch with all three of them.  Sam had to leave to head back to Grand Lake, where he has been working all summer, and meet his sister Ali who was to arrive there Sunday evening.  She and a friend are driving cross-country from upstate New York on their way to Portland, Oregon where Ali attends Lewis & Clark College.

After Sam took off, Stephen and Jen were going to go back to their hotel to wash the kitchen and bedroom linens they had bought for Sam.  I went down to the south side of town to check in to my Airbnb.  The three of us met at 800pm to have dinner together.  They were heading to Durango on Monday and will be making a big loop around southern Colorado before flying back to New York next weekend.

I will be in Colorado Springs for 4 nights.  I have a very busy schedule of places I want to go and things I want to see.

This is the view I have of Cheyenne Mountain from the cul de sac where my Airbnb is located. 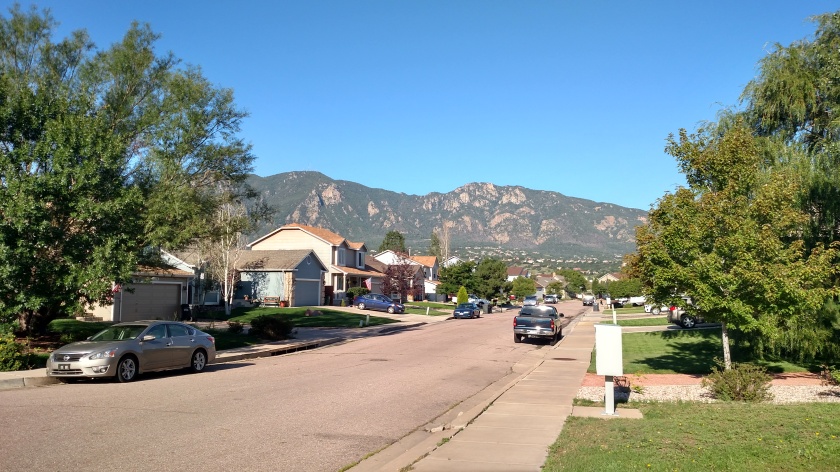 This is a less obstructed view from a nearby intersection.  I am too close to the mountain to get it all in one photo (it’s a VERY big mountain). 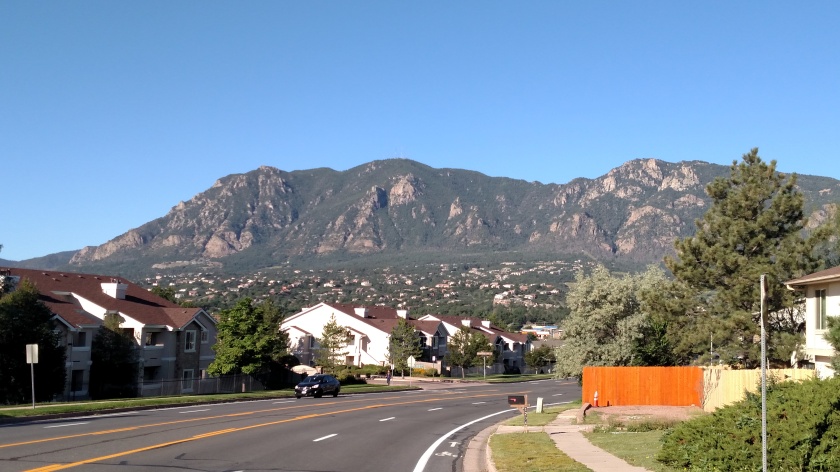 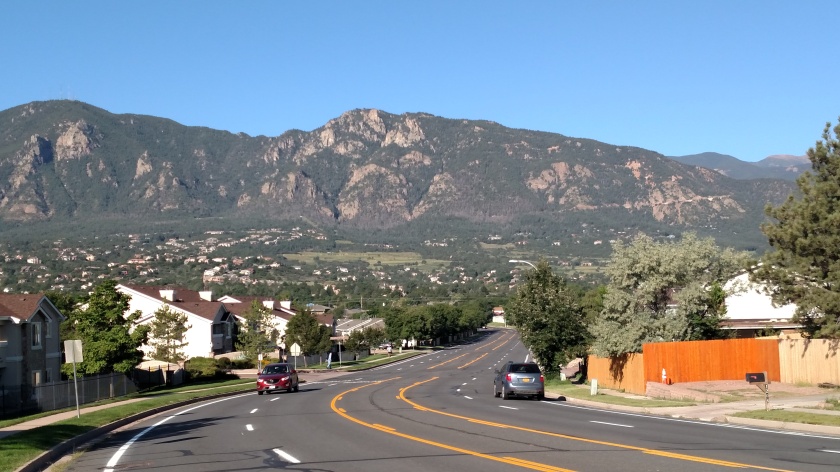 Cheyenne Mountain is probably best known for being the original home of NORAD, the North American Aerospace Defense Command.  They keep track of things in space (satellites, space junk, incoming missiles from North Korea, etc).  The Cheyenne Mountain Complex also has a ginormous underground bunker which is designed to withstand a direct hit with a nuclear device.  There are actually many different things located at the Cheyenne Mountain Complex, many of which aren’t talked about.  It is a super-secret facility and is not open to the public.  Guards there have shoot-to-kill authority.  They don’t screw around.  I didn’t even bother to go up and try to get a picture of the entrance.

Most of the NORAD operations have actually been moved to Peterson Air Force Base east of town.  I’ll be going there tomorrow (I had to submit a visitation request 24 hours in advance.  I’ve already been advised that I’ve been approved so long as I show up with the proper documentation).  There are still some NORAD operations housed in the mountain to serve as backup.

Colorado Springs has a huge military presence.  There are multiple army and air force bases here, as will as the Air Force Academy.  I am staying right across the highway from Fort Carson, a US Army Base which is home to the 4th Infantry Division as well as the 10th Special Forces Group.  The Cheyenne Mountain Complex is home to the Cheyenne Mountain Air Force Station.