I took almost 700 pictures today!  A friend had told me that Route 550 heading north from Durango to Ridgway was an amazing highway.  He was right.

These were all taken between 800am and 115pm, local time.  Before I even got out of town I found my first photo op.

I thought y’all might be getting tired of so much green, brown and gray.  This colorful playground caught my eye in a city park.  The sun was hitting it just right.

This Jabba the Hut-like formation is actually the Pinkerton Hot Spring, and was sitting quietly oozing it’s waters right next to the highway. 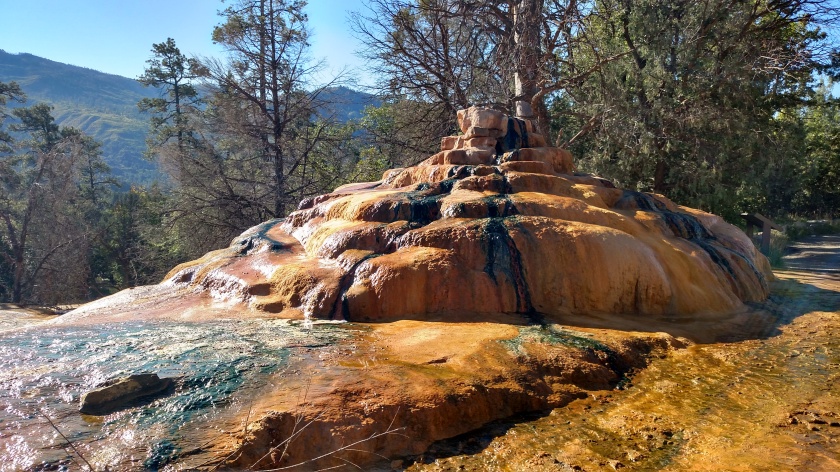 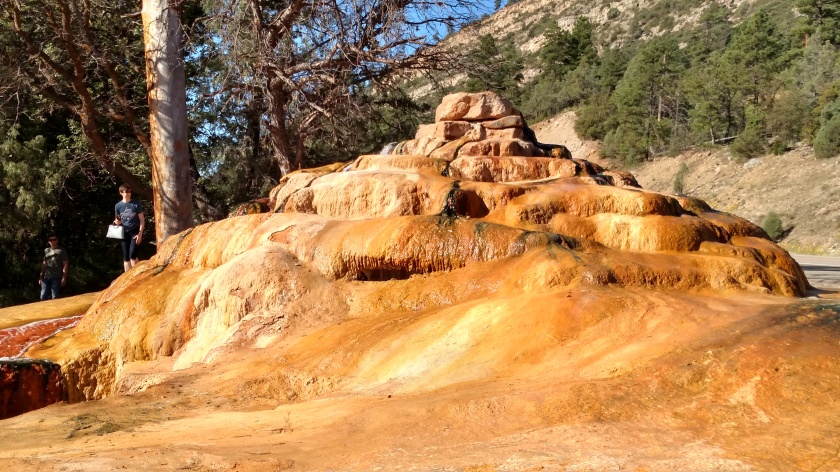 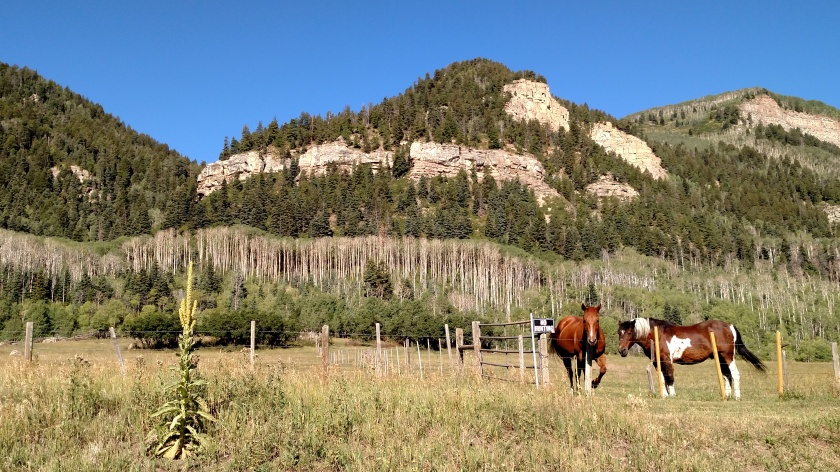 As I was accelerating to get back on the highway after stopping to take some other pictures I noticed three whitetail deer, two does and a young buck, to the right side of the highway, thinking about making a dash for it.

The lead doe turned around and consulted with her friends…. 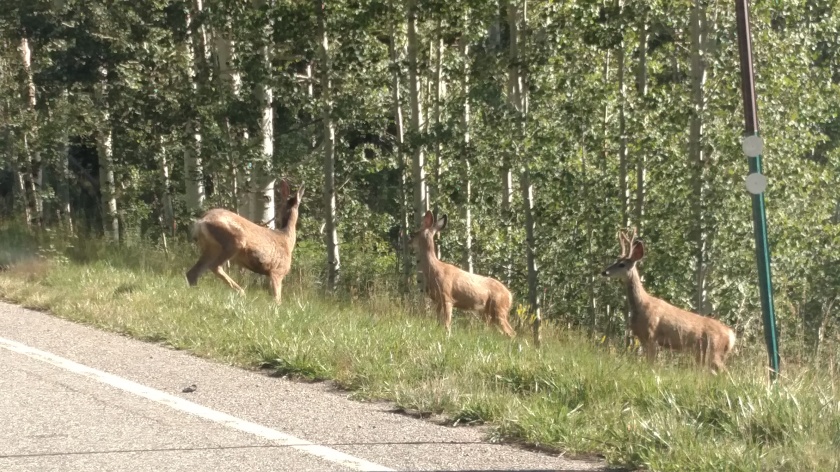 …. and evidently decided “Let’s do this”

Well, they didn’t exactly dash.  They just meandered calmly across the road while I tried to alert drivers coming behind me to slow down. 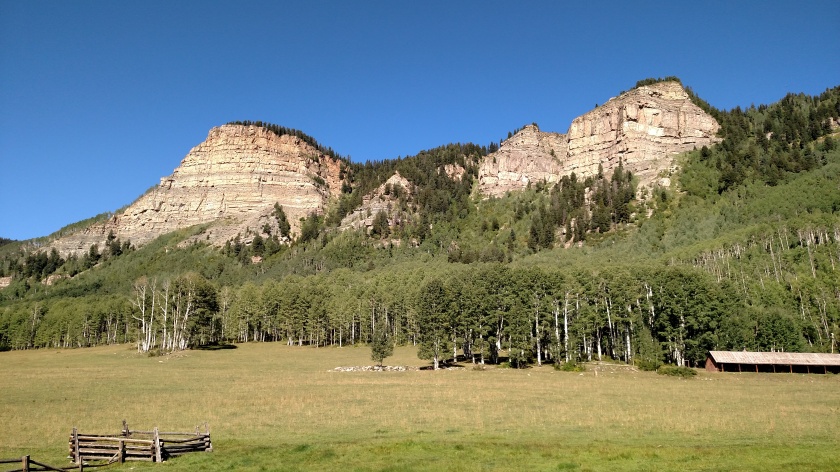 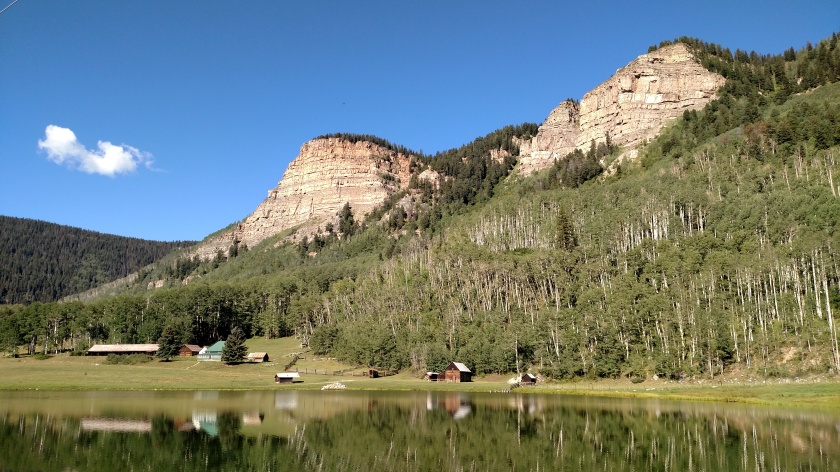 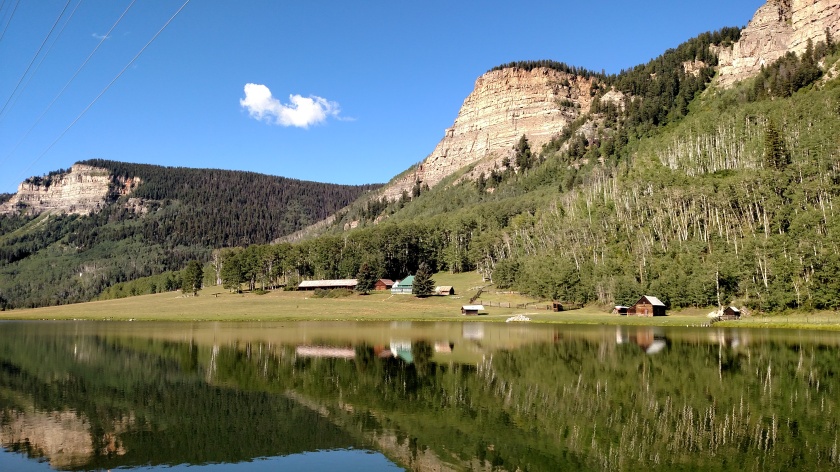 The property shown above is actually for sale.  I have the contact information for the realtor if you’re interested.  Maybe I can snag a bird dog fee…

This is the entrance to the Purgatory ski area.  Earlier in the day I had seen a parade of close to 50 BMW’s driving up the road as I was stopped to take pictures.  Evidently it is a huge annual club event for the western US which had outgrown it’s previous venue, and many of the folks were staying here.

Later in the day I met a real nice guy named Ralph who lives in upstate Washington, close to the Canadian border.  I had stopped in a pullout area to take some pictures and his car was already parked there.  He was driving a BMW but said he technically wasn’t part of the club event.  He was very excited about several BMW’s which drove by us as we talked, pointing out which models they were.

He suggested I take a picture of our two cars together, with our similar blue-on-white license plates from opposite ends of the country.

I saw him again later in the day at yet another photo op, and may see him on Monday as we both plan to visit Mesa Verde National Park. 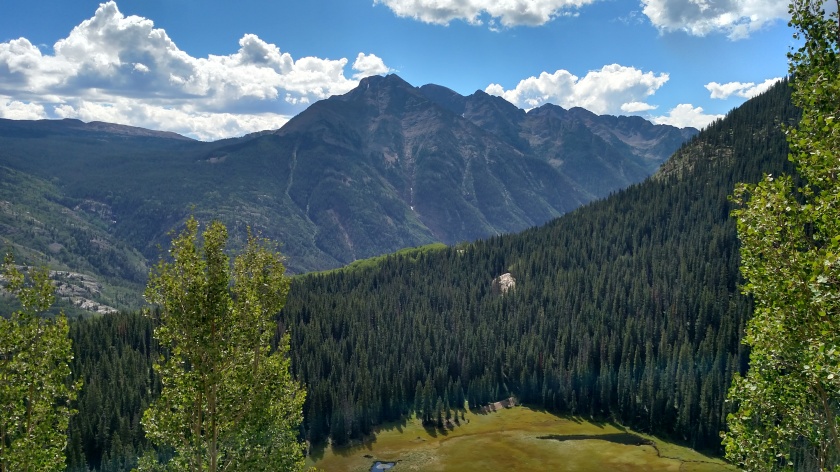 As I drove up the road there was a long stretch at fairly high elevation with no guardrail (fairly common out west, actually).  The highway department had placed orange cones to prevent people like me from pulling off.  Of course I had to go back and get pictures. 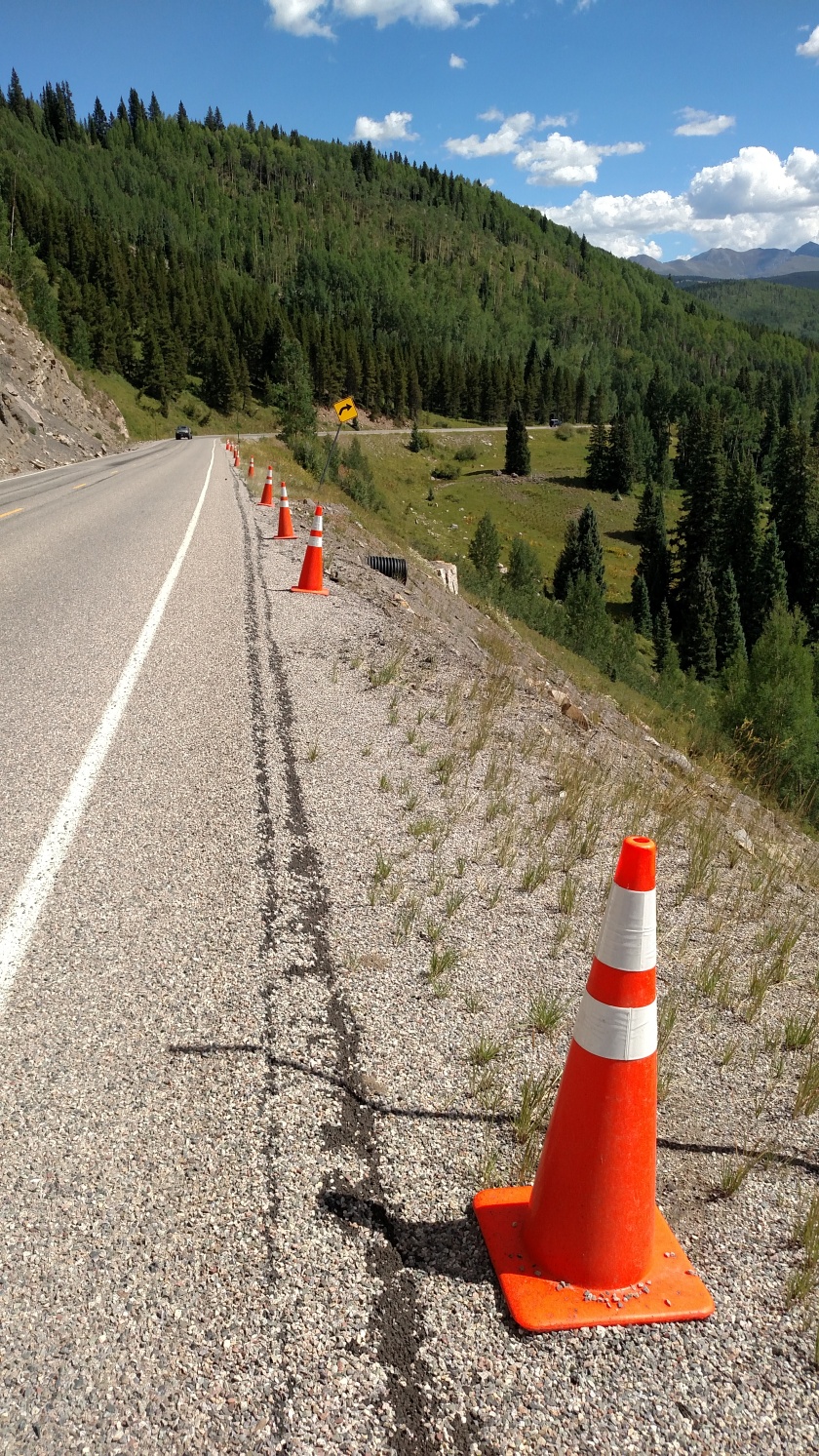 Like I would have been inclined to pull off here…..

I was safely parked on the opposite side of the road, leaning away from the drop off.

All I had to worry about were the tons of cliff rock towering above me which might come crashing down at any moment and squash me like a bug.

I took a break and turned off the road at Andrews Lake, a state day use area designed specifically for people who are physically challenged.  What a great idea to provide such a place! 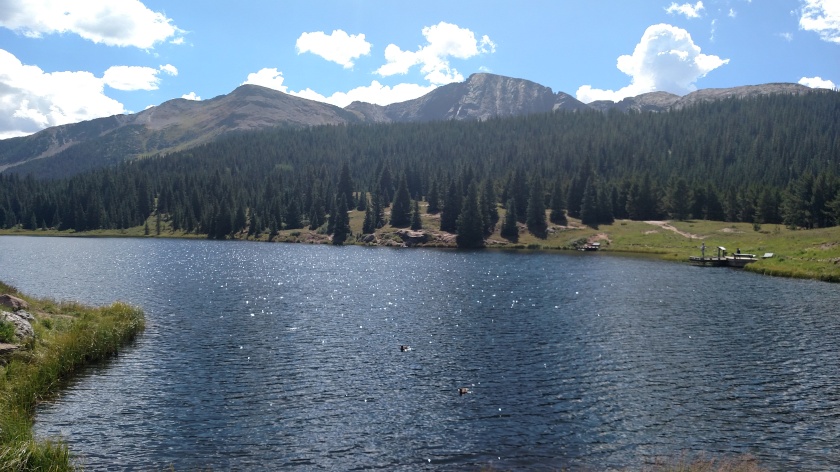 This young man was part of a group of five people visiting the area.  They are traveling without an agenda or hotel reservations, just winging it as they go.  His Dad and I had a lengthy conversation about Airbnb and how it might help them find less expensive accommodations at the last minute.  I wasn’t wearing a hat, as I was expecting it to be a quick hit and run photo op.  I’m going to have some serious sunburn tomorrow!

I heard a piece on NPR a few weeks ago about a one-of-a-kind amusement park in Texas which is also designed specifically for handicapped people.  Everything there can be used by anyone, regardless of their disability.  They even have special wheelchairs which can be used underwater.  They want people to be able to enjoy their facility without inhibition and not feel that people are staring at them.  Another great idea! 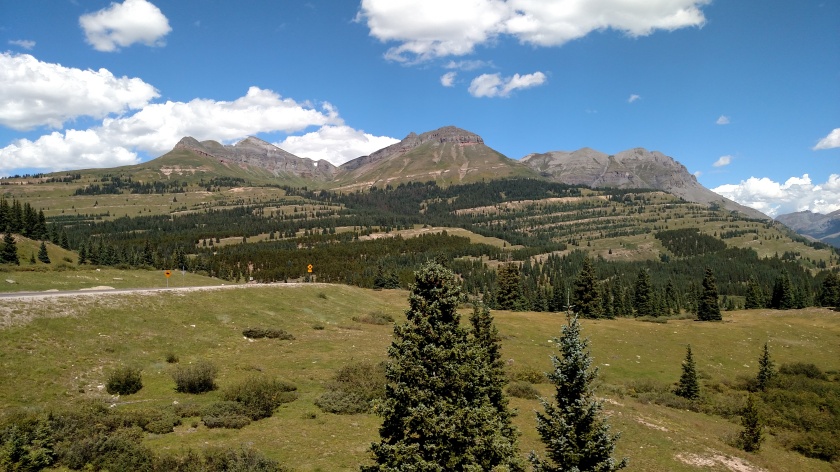 I had pulled off in a parking area to take the two photos above.  As I was walking up a ramp to position myself for the second one someone yelled “Hey John”.  I wasn’t sure they were talking to me but I didn’t want to be rude so I went up to where they were after getting the shot.  Turns out I had met them earlier in my trip.  I was somewhat embarrassed that I didn’t remember them, but I talk to lots of people and they all kind of blend together.  I, on the other hand, am usually the only one wearing a Safety Sam vest.

I figured I’d better take their picture so I will remember them in the future.

As I was walking back to my car after taking the lake picture I saw some neat plants right next to the road. 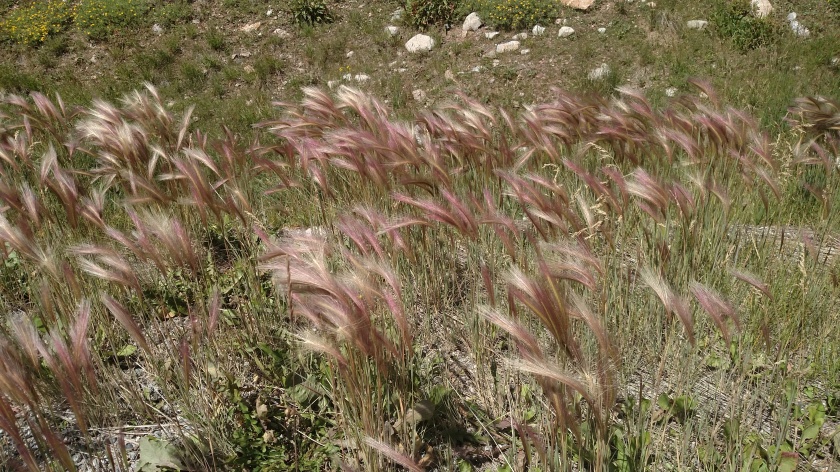 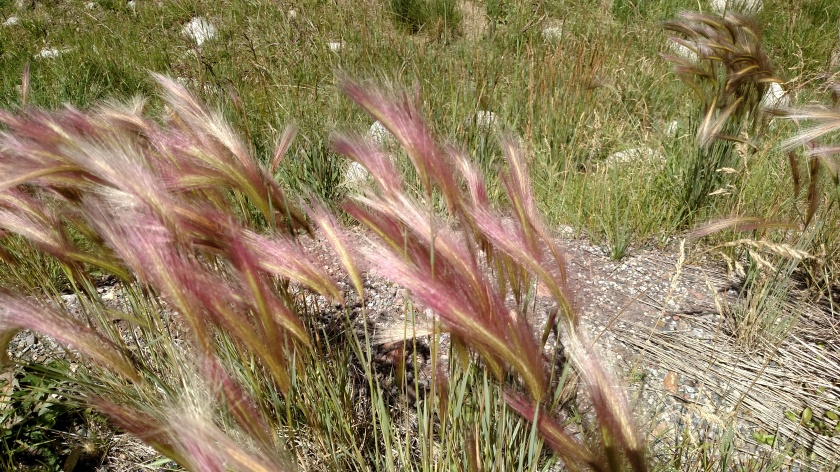 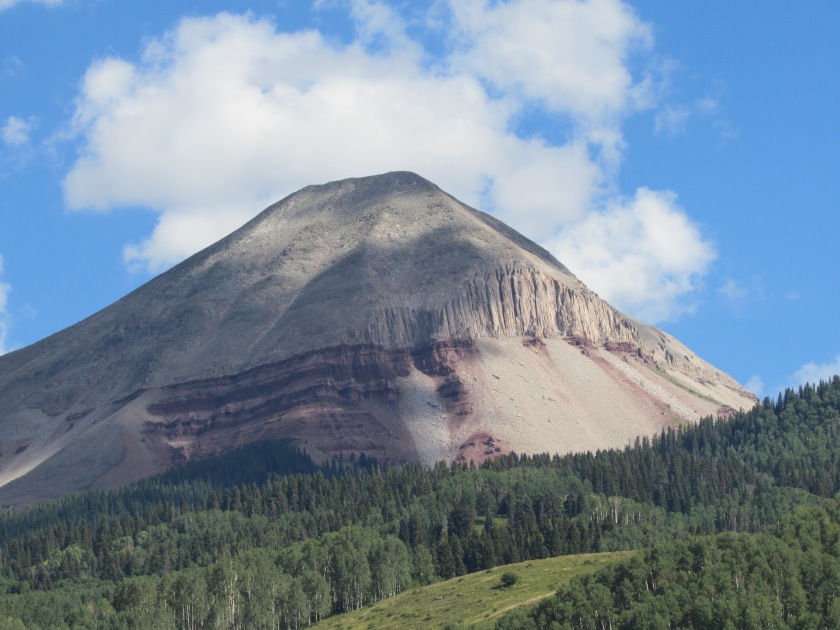 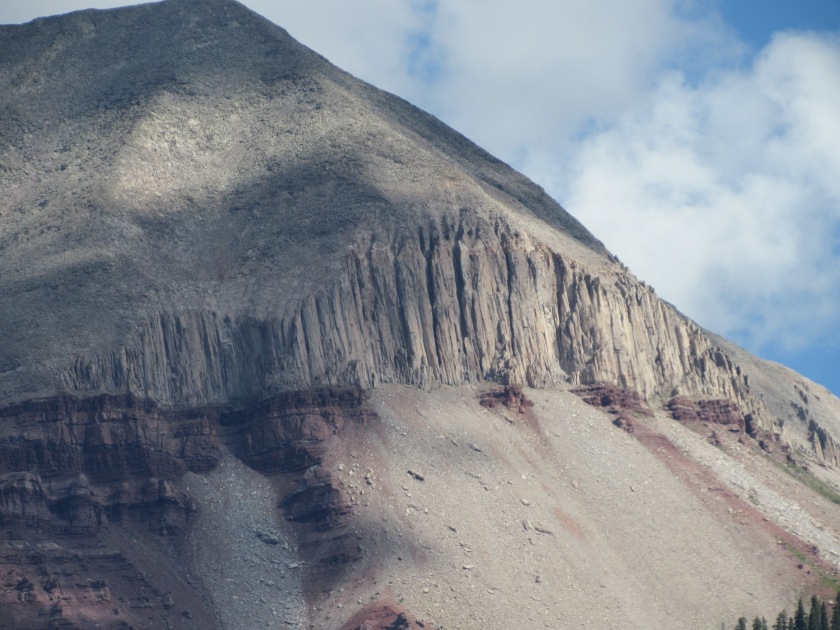 At one of my stops I took a video of an Aspen tree “quaking”.  Unfortunately, I can’t post it on this blog.  For those of you who haven’t ever seen one, an Aspen tree has relatively small, rounded leaves, a little larger than a quarter.  When the wind blows the leaves appear to flutter, or quake, as they twist and turn in the breeze.  You can go to YouTube and find videos there.  It looks really cool.

Since I will be extending my trip a few more weeks I should see Aspens which have changed to their fall colors, especially at elevation.  Here is a sneak preview.

I finally arrived in Silverton.

If you look closely at the bottom of the photo below you’ll see the black and yellow train.