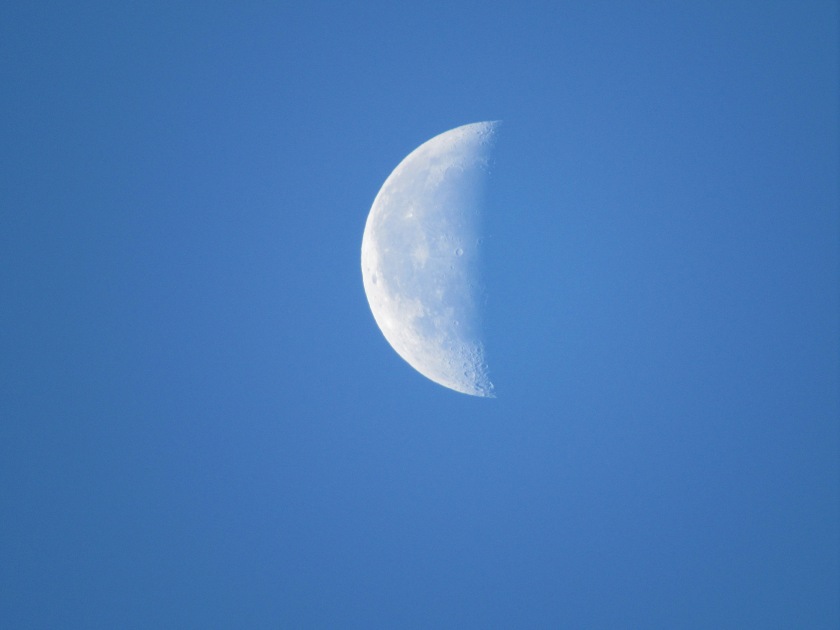 As I was walking back to my car from taking the picture of the road sign I noticed the half moon, high overhead.  Can’t wait to get some pictures of the full moon in a black sky.

As I drove further up the road I saw the guy in black fishing in the river.  His two buddies were still getting prepped near a tunnel through the rock.  I talked with them briefly, then asked the guy you see if I could take his picture before I left (his other buddy was already making his way toward the river to join the guy in black). They were local guys, just out for a fun day fishing.

As I drove further up the road I stopped at a roadside park to use the restroom.  There was another car there with Louisiana plates which I had seen earlier in the day driving past as I was out taking pictures.  As I was walking back to my car he had gotten out with his dog and they were walking towards the river.  We talked for a few minutes.  He had moved to Ft. Collins a few months ago and said he was playing hooky from work, so I didn’t take his picture.  He was a real nice guy and we had a pleasant conversation.

As I drove further up the road I passed a good photo op and went up to find a place to turn around.  As I got to it there was a big white pickup truck doing the same thing.  Well, he turned off at the same spot I was planning to.  They were a young couple from Greeley, Colorado, not far from Fort Collins.  Riley said this was his favorite fishing spot and he had brought his wife, Haley, and their dog Sophie with him to enjoy the day together.  They were real nice kids (Riley said he’s 19) and I really enjoyed talking with them.  They suggested a place further up the road to stop and get breakfast. 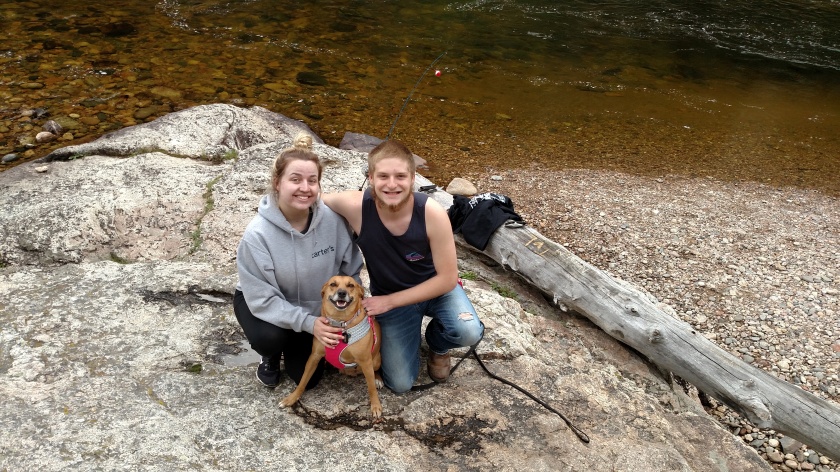 I stopped at the place they suggested and ordered sweet creme pancakes with bacon and scrambled eggs to go.  While I waited I visited with a young lady I had parked next to, as well as two of the restaurant employees.  As I walked up to the restaurant I got this photo of some huge flowers.

When I got my food I drove on up the road in search of a picnic table.  I found one at a US Forest Service center just a few miles away.  It was a perfect setting.  A quiet spot in the shade with the scent of a wood stove in use (much more pleasing when you know it isn’t from a wildfire).  After I ate I filled my water bottles with water I had brought with me (theirs was marked as not safe to drink).  Before I left I popped in the building to thank them for a providing nice setting and met the young couple from Houston who were manning the center as volunteers.  They get to camp for free in exchange for working around the facility, and had been there since June.  My former co-worker Shari’s daughter is a state park ranger in North Carolina and had told me about this program that the US Park Service has.  This was a US Forest Service facility and clearly they have the same program in place.  They were just a charming couple and their young son was there too, absorbed in a game on his phone (his mom said a bear had been spotted in the area so she wanted him to stay inside today).

After spending some time visiting with them I resumed my trip up Route 14.